Despite the overwhelming impact of industrial manufacturing there has always been interest in high quality, handcrafted articles.  First, in Europe “arts and craft " societies were founded and flourished, then, in America institutions such as Black Mountain in North Carolina, Berea College in Kentucky and  Cranbrook Institute in Michigan were educating artists in the crafts of textiles and weaving, woodworking and silversmithing. If it were not possible for interested students to attend a two or four year program of industrial arts there were seasonal courses available.  During this period Arts and Crafts Societies appeared, somewhat reminiscent of the European medieval guilds.  Each such society set standards for design and workmanship and often offered outlets for finished products to be made available to the public.

According to Ayres, Hansen et al,  (American Arts and Crafts Textiles, Abrams, 2002) “Arts and Crafts textiles represent one medium that actually attained the goals of the Arts and Crafts movement: to introduce and disseminate a new design aesthetic that was affordable, attainable, and of its time, and that emphasized an appreciation of handwork. Through books, magazines, schools, and commercial companies the tenets of Arts and Crafts design were spread via textiles.”

Not all the Societies were large, nor were some long lasting.  One exception is Folly Cove Designers, Cape Ann, Massacheuttsets.  The group’s leader, Virginia Burton Demetrios stressed the concept of designer-craftsmanship and the 43 designers who worked from 1941-1969 (some left the group after a few years, while many remained until they closed the workshop in 1969) came to be known as professional block printers.  Their designs were carved into linoleum blocks and printed onto fabric for household goods, such as placemats, clothing and bed linens.  Some designs were created to be printed on paper for wallpaper and greeting cards. Following the death of Demetrios, the remaining designers agreed to cease selling their designs to the public and donated their design samples and prints to the Cape Ann Historical Association.

The Association held a major exhibition of their work in 1982 and again in 1996. 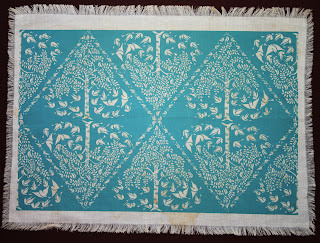 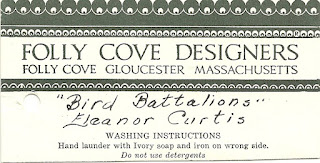 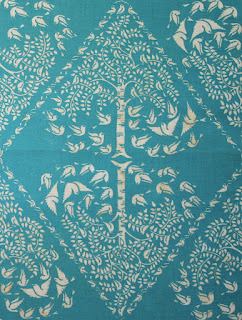 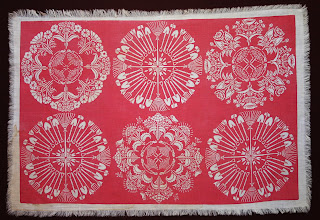 Eleanor Curtis “Gay Bouquet” 1956
Placemat:  rose-toned paint on cotton.  Large rondels of two basic designs: one of garden tools: rakes, shovels, hoes and spades and forks, the second three circular patterns of floral “poseys” around a center of decorative baskets.
This is an example of a circular design 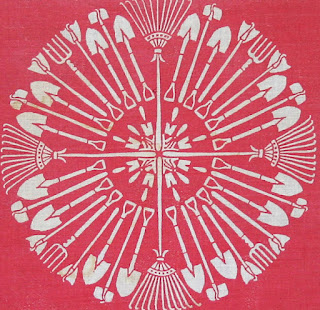 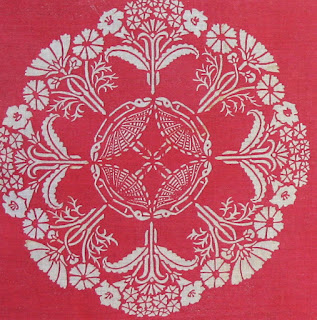 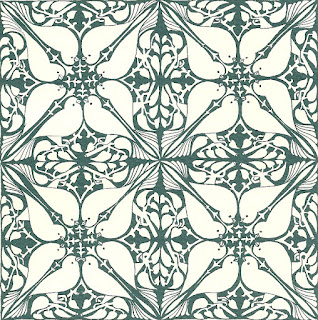 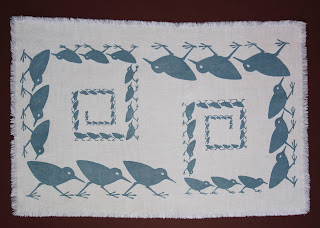 Elizabeth Iarrabino “Sand Pipers” 1954
Placemat: blue-gray tone on cotton.
This progression design is an example in which each motif is repeated in five sizes with each progression twice the size of the preceeding one.

In the next few weeks there will be many graduation ceremonies and despite trends to the casual, these are steeped in tradition. From the sheepskins to the caps and gowns there is great history being reinacted.

So, we’ll start with the term “sheepskin”, meaning, of course, the diploma. From the Greek meaning “paper folded double”, a diploma, in our context, means, a certificate issued by a school, college, or university to a student, indicating the completion of a prescribed course of study. During the medieval period, the skin of animals was prepared for writing or printing upon by a laborious process that produced a translucent material we call vellum. Important papers were inked on vellum. Vellum can be far more durable than paper and there exists many examples of medieval documents remaining in collections. Today, there are still uses of animal vellum, although due to the expense, there is a modern version of plasticized cotton. 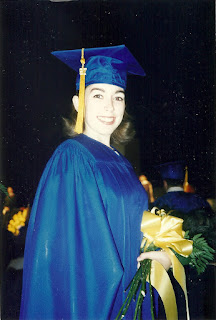 
While institutions in other countries have unique diversity in academic dress, the US has standardized a definite system that is followed by American universities and colleges. This is called the Academic Costume Code and Ceremony Guide. The American Council on Education has an appointed committee that periodically reviews the standards. The code covers the pattern of the gown (pointed sleeves for bachelors’ degrees, oblong sleeves for masters’ gowns and bell-shaped sleeves for doctorate degrees). Also covered is the color, trimmings, linings, hoods. For all academic purposes, the colors of the gowns and trimmings are associated with different disciplines, such as Theology (scarlet), Nursing (apricot), Philosophy (dark blue).


The cap usually worn consists of a square board fixed upon a skullcap. This is commonly referred to as a “mortar board” named after the board used for carrying mortar by masons. Middle Age scholars wore a similar cap which some thought actually helped them think (“thinking caps”). In the US mortarboards are worn also by high school graduates. A long tassel is fixed to the center point of the cap. A charm indicating the year may adorn the tassel. In some ceremonies, the student wears the tassel on one side until the diploma is received , then it is switched to the other side.


So we continue with all the Pomp and Circumstance. Congratulations to all of this year’s participants.
Posted by Margy Norrish at 3:42 PM No comments:

I guess the shower I wrote about last month did its job as I look out onto our back patio and see a very respectable garden. I am not a great horticulturist, I really am not that fond of gardening but I do appreciate the beauty of a nicely landscaped bed of flowers. It doesn’t matter what type of flowers, formal roses or wildflowers are fine with me.

Floral motifs and patterns have been a part of textile design from the very early ages. . Even before hand- printed fabric, these motifs were added as surface embellishments. The most recognizable surface embellishment is embroidery. In the 18thC Saint-Aubin wrote “To Embroider is the art of adding the representation of such motifs as one chooses-flat or in relief, in gold, silver, or color- to the surface of a finished piece of cloth. There is hardly a Nation that does not embroider with the different materials produced by its climate.” (The Art of the Embroiderer, 1770)


One of the earliest examples of floral embroidery is a silk fragment thousands of years old found in the Caves of the Thousand Buddhas at Dunhung., now at the British Museum.

Early embroiderers were not concerned if they lacked the artistic talent of drawing their own designs from nature. They simply turned to the unlimited variety available in floral and herbal pattern books. Often these books also contained illustrations of insects, birds and other natural elements sometimes very representational, sometimes a bit stylistic. 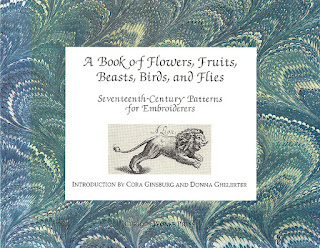 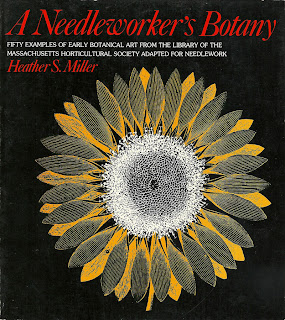 By the late 19thC patterns were found in every woman’s magazine or periodical or could be purchased through the mail. A very popular form of this hand work was called “silk work”, “needlepainting” or “art embroidery” due to its very realistic rendering of the subject.  Originally from England, it was enthusiastically embraced by American needle-workers.  One could order kits with pre-printed designs on cotton, linen, or even silk.  Included with the instructions was a quantity of silk threads, the colors chosen from hundreds available to produce the most subtle of shadings for the flower petals and leaves. 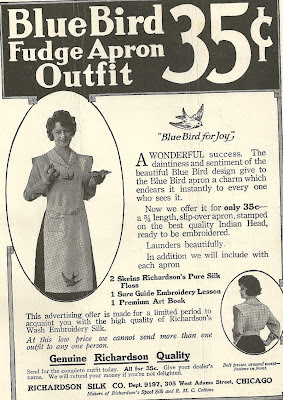 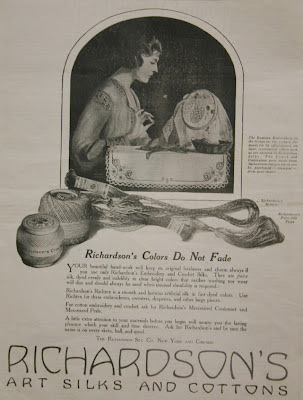 This pillow cover was embroidered from a kit offered by the Richardson Silk Co. of Chicago and Belding.  Many other manufacturers such as Corticelli and Heminway Silks offered such products. 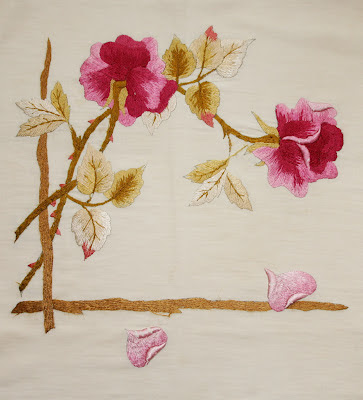 Posted by Margy Norrish at 3:45 PM No comments:


There occurs, occasionally, in history instances in which events come to be misinterpreted, misconstrued, misunderstood. In other words, not exactly correct.
The so-called “holiday” of Cinco de Mayo is a case in point. Many probably believe that this date is widely celebrated in Mexico as Independence Day. Not so. Firstly it is not Mexican Independence Day (that is in September) and secondly it is not widely celebrated in Mexico, rather it is an excuse for those in the US, especially in the southwest to drink Corona and eat empanadas. 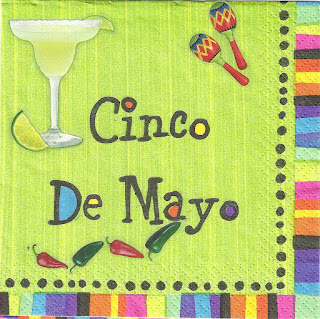 Following independence from Spanish rule, Mexico entered a period of conflict for political power and foreign interventions. Heavy debt to several European countries, which Mexico could not repay, gave France an opportunity to expand their sphere of influence and sought to place Archduke Maximilian of Austria on the throne of Mexico City as emperor. As the French marched along to Mexico City they encountered resistance from a small militia of rebels who defeated the larger French army and temporarily stopped the takeover. This occurred in the state of Puebla and it is here that Cinco de Mayo is indeed celebrated today. Incidentally, the French returned and Max ruled Mexico for 3 years until he was “dispatched”, so to speak. So, it is the Battle of Puebla and the brave men under General Zaragoza that is honored on May 5.

All this notwithstanding, those who wish to start the summer patio scene early flock to their supermarkets, who have devoted valuable floor space to displays of Mexican beers (which are really, really good), tortilla chips, bright napkins and plastic Margarita glasses, to stock up on the essentials.

So now I come to a “misinterpretation” in the textile world.  Western textile designers from the second quarter of the 20th C. began to produce, what textile historians refer to, as “Ethnic”patterns.  These were simplified, stereotypes of what the western world considered folkloric characteristics of other countries.  For example, a Bavarian gentleman in leather shorts and knee socks holding a large beer stein served by a blond, buxom girl in a long skirt and a low-cut blouse.  Or a group of young children wearing wooden shoes frolicking in a field of tulips with windmills in the background.  You get the drift.  These were never meant to be derogatory, although certainly not politically correct. They were merely misrepresentations of the cultures which were considered exotic or interesting, but came to be motifs or symbols of these peoples.  And thousands of yards of such fabrics were made into tablecloths, curtains and pillows and sold, along with ceramic ashtrays and figurines of the same ilk. 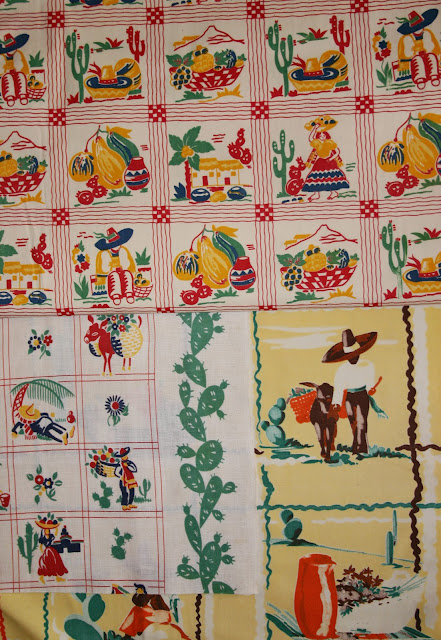 Perhaps there is no better example of such designs as Mexican and south-of-the-border textiles.  Smiling senoritas with baskets of fruit carried on their heads, donkeys with carts, cacti, adobe walls and men in large sombreros sleeping during siestas. Now I must confess.  I find these very charming, with no disrespect to my neighbors to the south and I have been collecting them for many years.  After all, I need them for my Cinco de Mayo buffet.

Posted by Margy Norrish at 2:28 PM No comments: