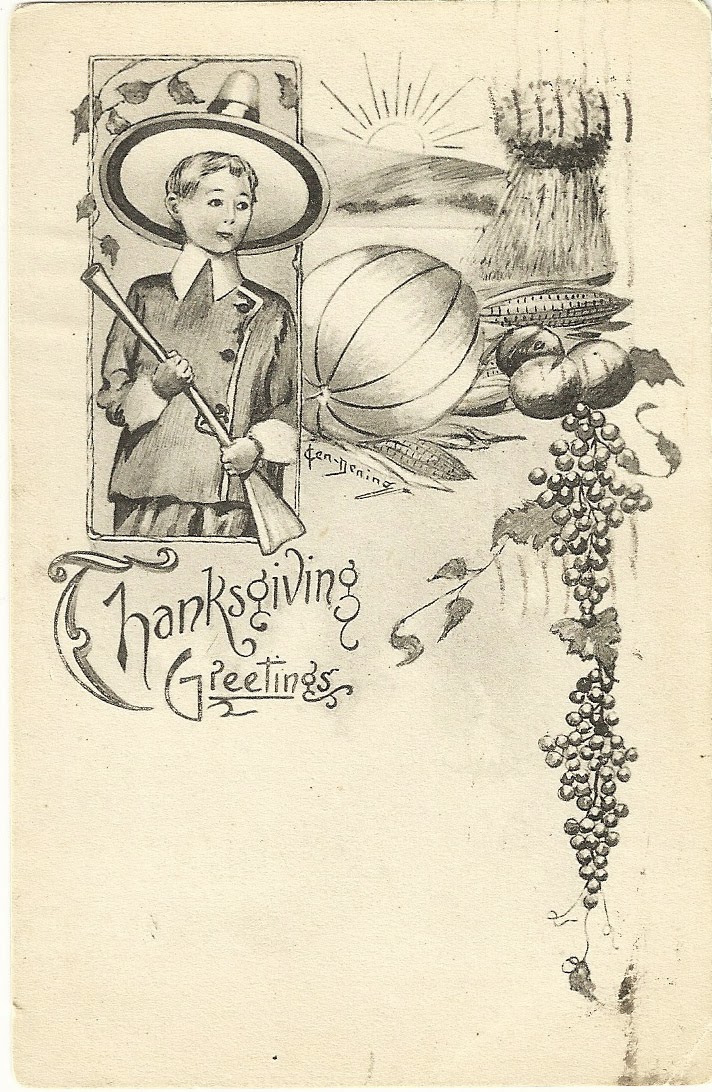 Now is the time for planning harvest feasts, entertaining friends and preparing for the coming holiday season.  But the real reason for Thanksgiving, is, of course, reflecting upon our blessings.  Would it not be better, actually, to spend a few minutes each day acknowledging the good things in our lives instead of waiting an entire year to do so for one day only?

Margy
Posted by Margy Norrish at 12:11 PM No comments:

A Bit of Fashion in Russia

Spending time in Russia this fall, fashions didn’t seem too different from those at home.  There was a bit of a uniform look, though, amongst the younger women.  This look consisted of black leggings or tights worn with a long tunic knit top or very, very short black skirt and high black boots.  Actually, this was very flattering for most of these tall, thin, long-legged women, but perhaps a bit boring.  Occasionally, one would see a beautiful jewel-toned wool coat worn with a floral shawl.

While in the southern Siberian city of  Irtusk I happened upon a St. Petersburg newspaper (thankfully in English) with an article about  growing enthusiasm for vintage clothing.
The St. Petersburg Tlimes, Wednesday, September, 25, 2013

We take the vintage look for granted and spend many hours scouring sources for great, unique items reasonably priced, of course.  That has not been the case in Russia.  Dressing in ”Vintage” is a fashion revolution which goes against concepts that dressing in style requires wealth.  The article proposed that dressing in clothing from the past may remind one of previous, “trying times” and wearing used clothing is not practiced commonly in Russia because “ it is normally associated with being poor”.

Those interested in dressing in unique style, can do so at a fraction of the price of current clothing.  There is a “minimum of 20% mark-up added onto clothing by western brands available” in St Petersburg.  The author looks 5 years into the future and sees the trend in retro growing and individuality replacing the “uniform look” seen on city streets.
Posted by Margy Norrish at 1:14 PM No comments: 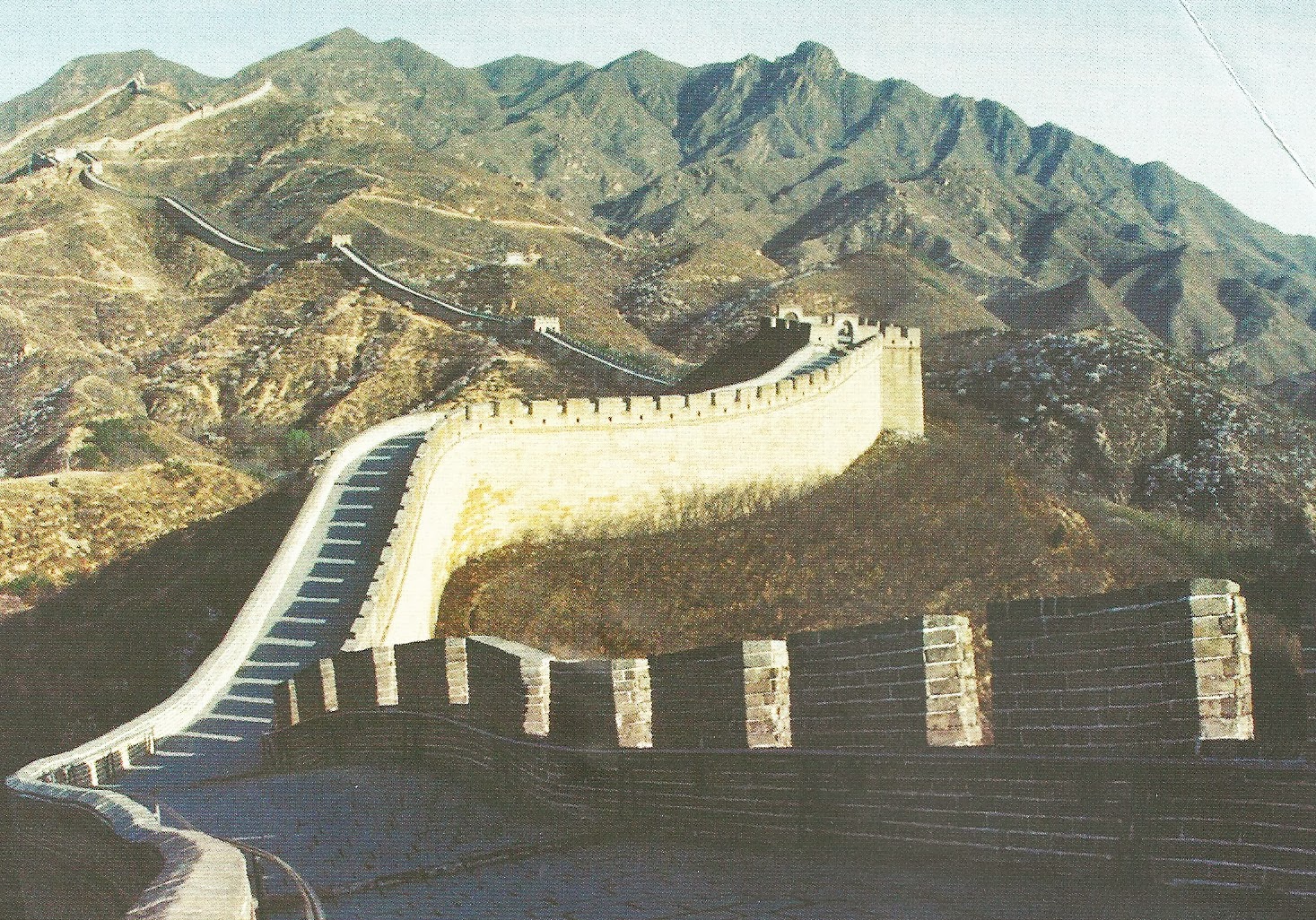 Of course, you cannot visit China without encountering every type of silk fabric and many, many products made from this luxurious fiber.  There are dozens and dozens of workshops that will tailor a suit and deliver it to your hotel within 24 hours.  Hundreds of lovely scarves and shawls are folded on counters in every department store.   But there was one silk product I had not considered and I found it at the Yuanlong Silk Factory.

I saw a small description of the factory-showroom in our Beijing travel guide.  I was intrigued by the description of a teaching area of sericulture and their show rooms of products, not to mention an English-speaking “tour guide”.  We found the factory was located  a 15 minute walk from a  subway station and near The Temple of Heaven where we had planned to spend the afternoon.  So off we went. 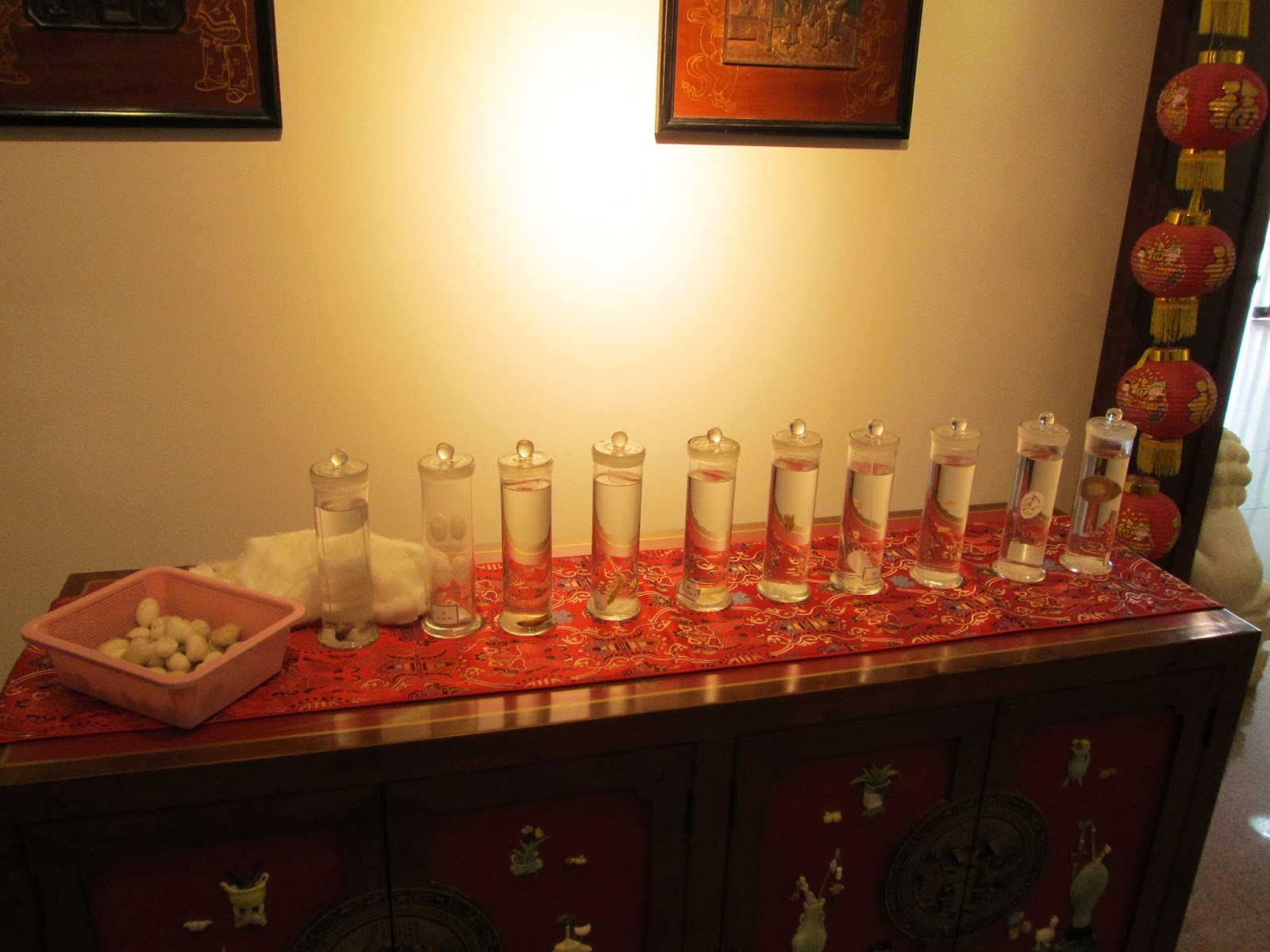 The foyer of the showroom was filled with vintage photos and maps relating to the silk industry.  A series of displays featured cocoons,  larvae, manual looms and other machines used when silk weaving was a cottage industry. 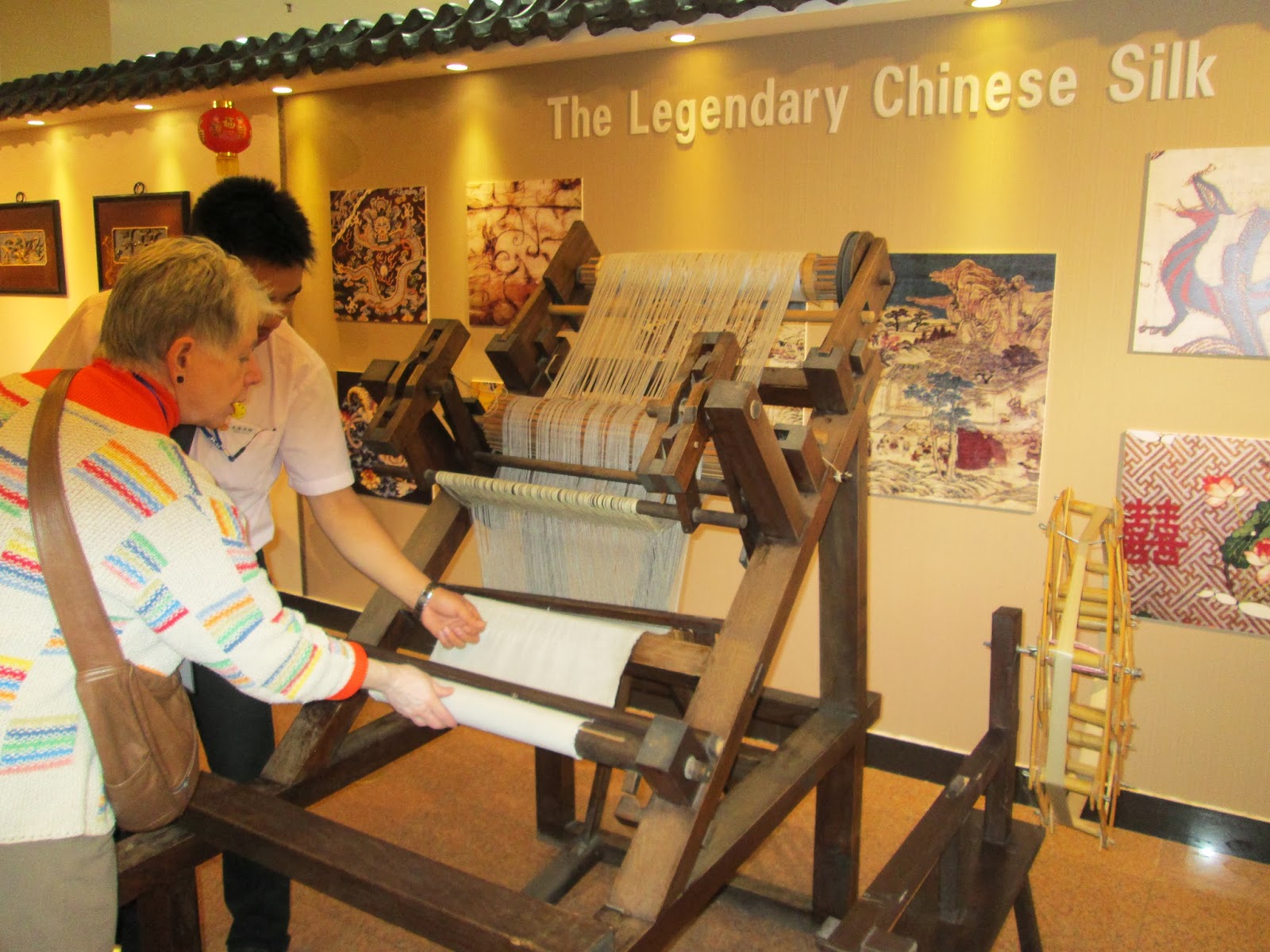 Now, all aspects are automated and factory produced with one exception.  Silk-filled duvets!!!  Instead of a feather or down filling, these bedcovers are filled with silk filament, straight from the cocoons! 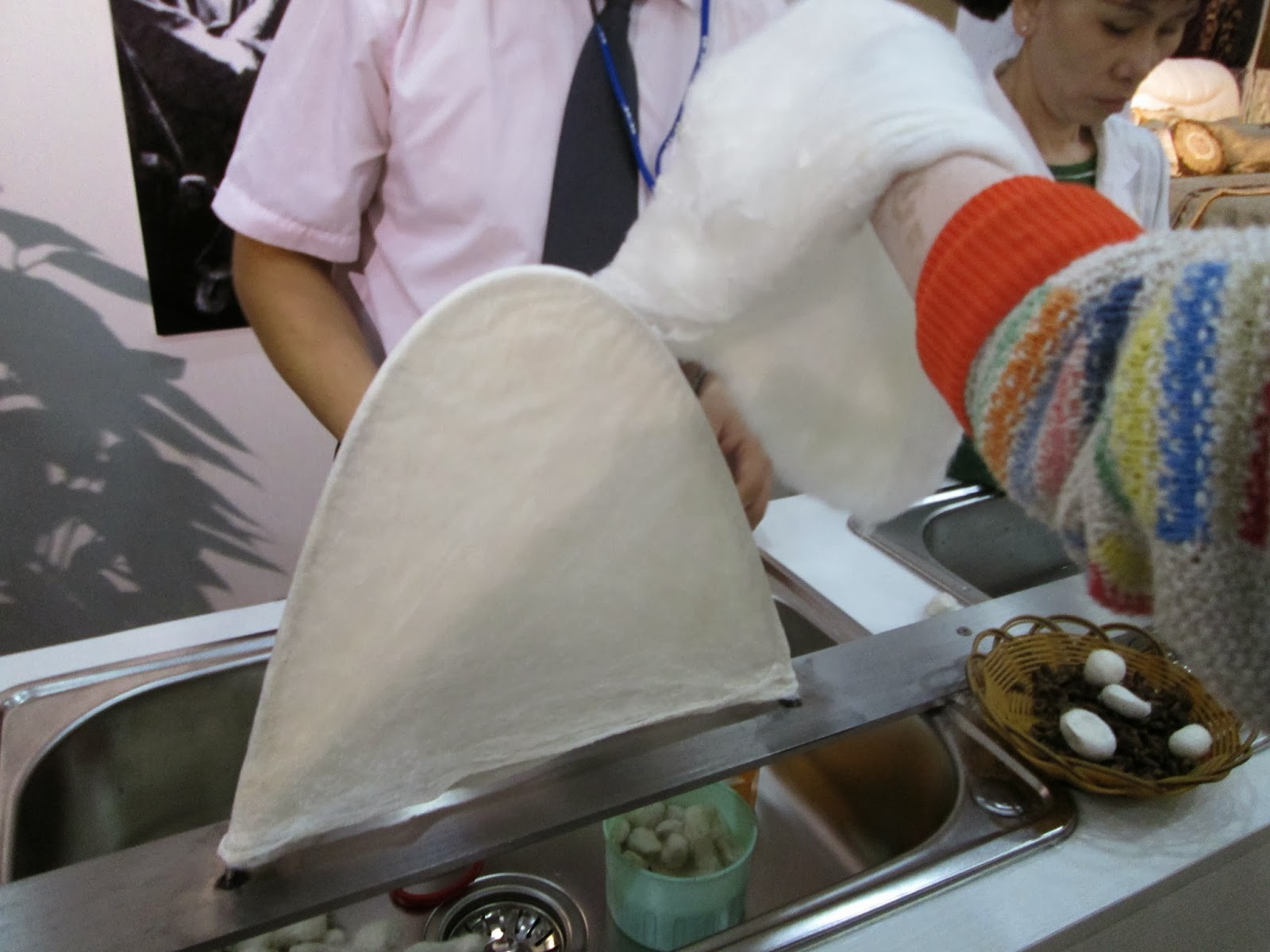 A small opening is made in the top of the cocoon and the larva removed.  The cocoon is then softened and stretched over a small frame.  The cocoon is constantly massaged and stretched over larger and larger frames until a large sheet of silk filament is the size of a mattress. Just one cocoon!!  The filament sheets are piled depending upon the weight of the final duvet.  For a 2,000 gm cover there are 4,000 cocoons used.    The mat of filaments is enclosed within a cotton cover and then packaged. 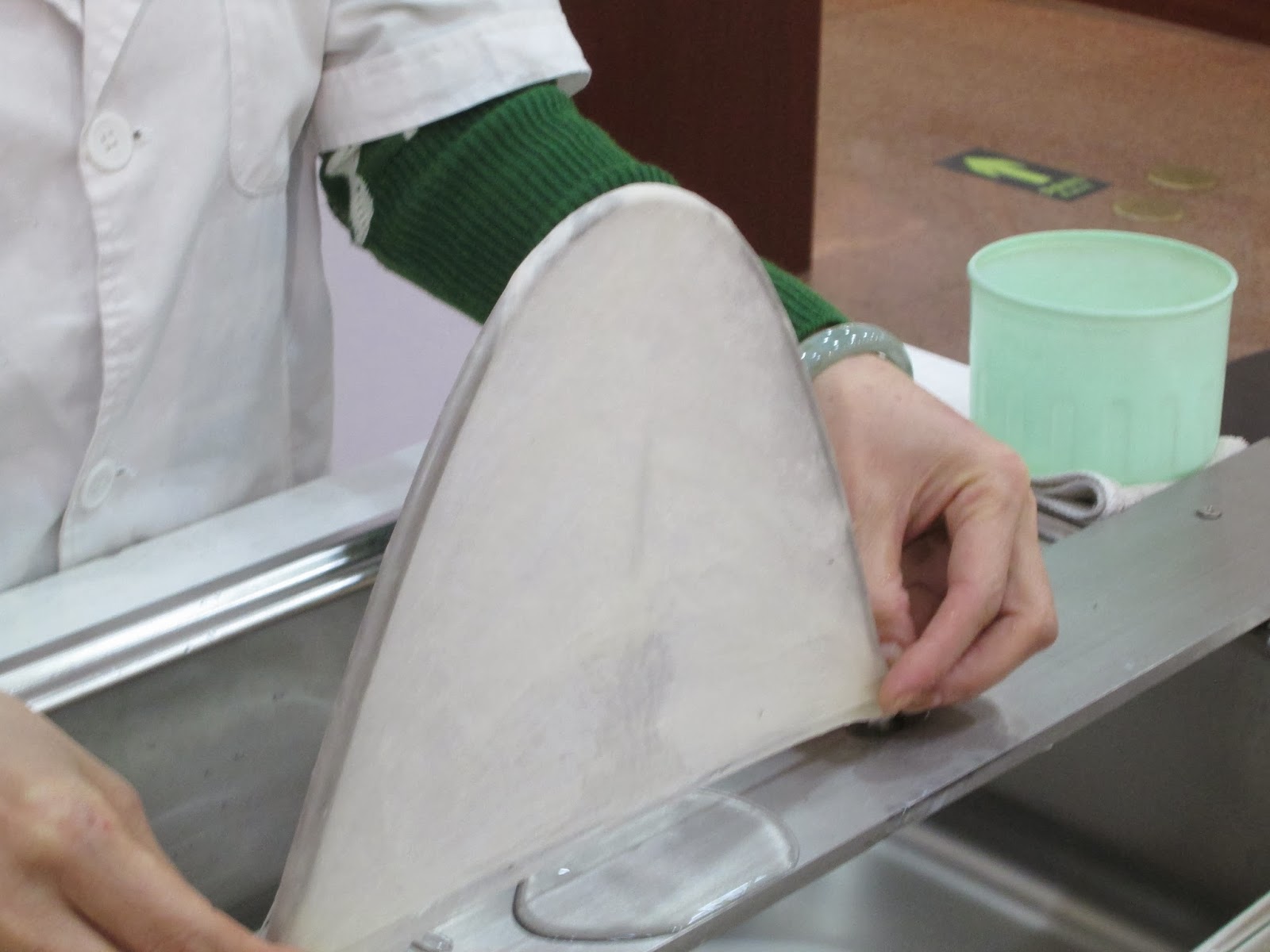 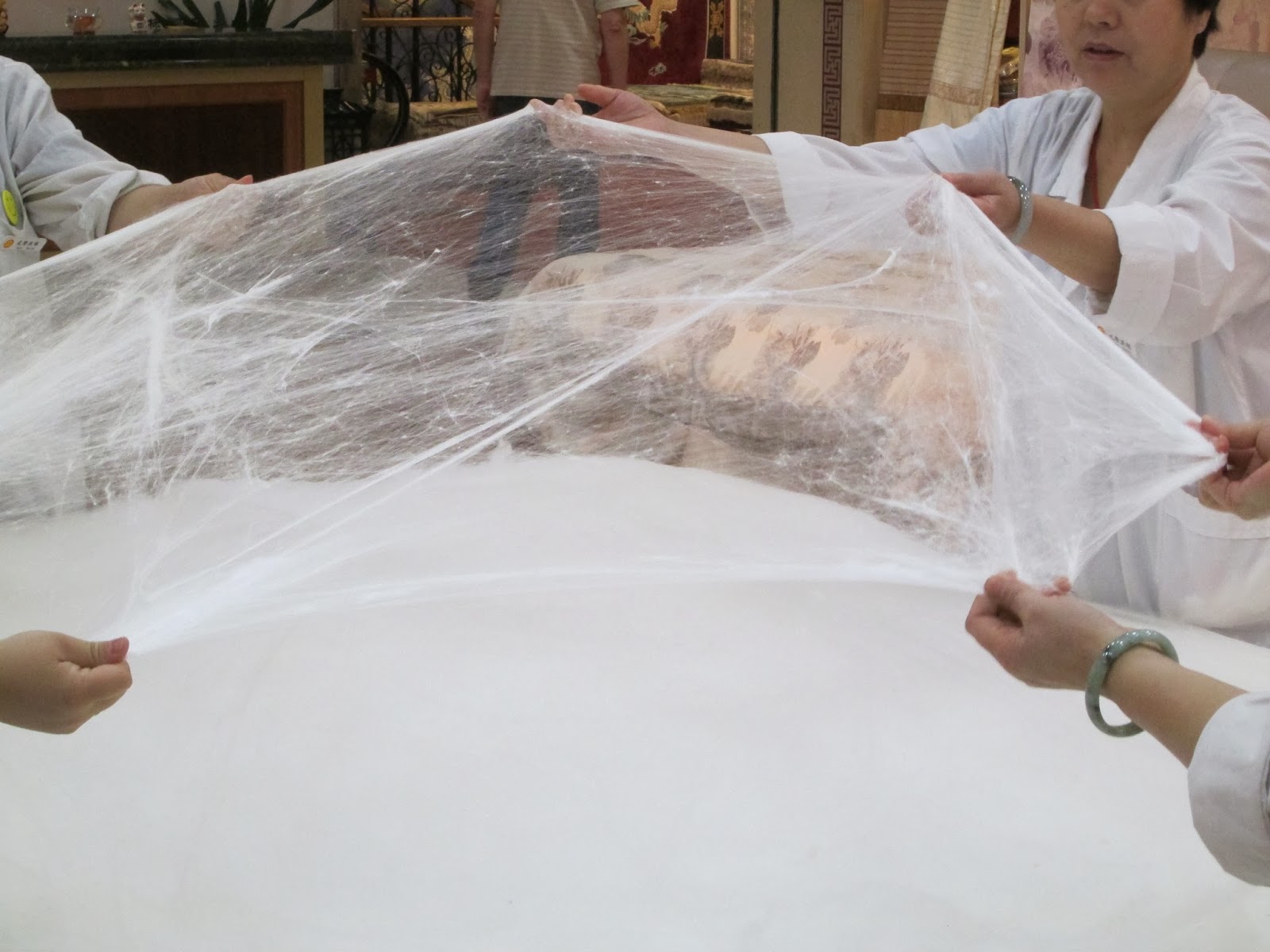 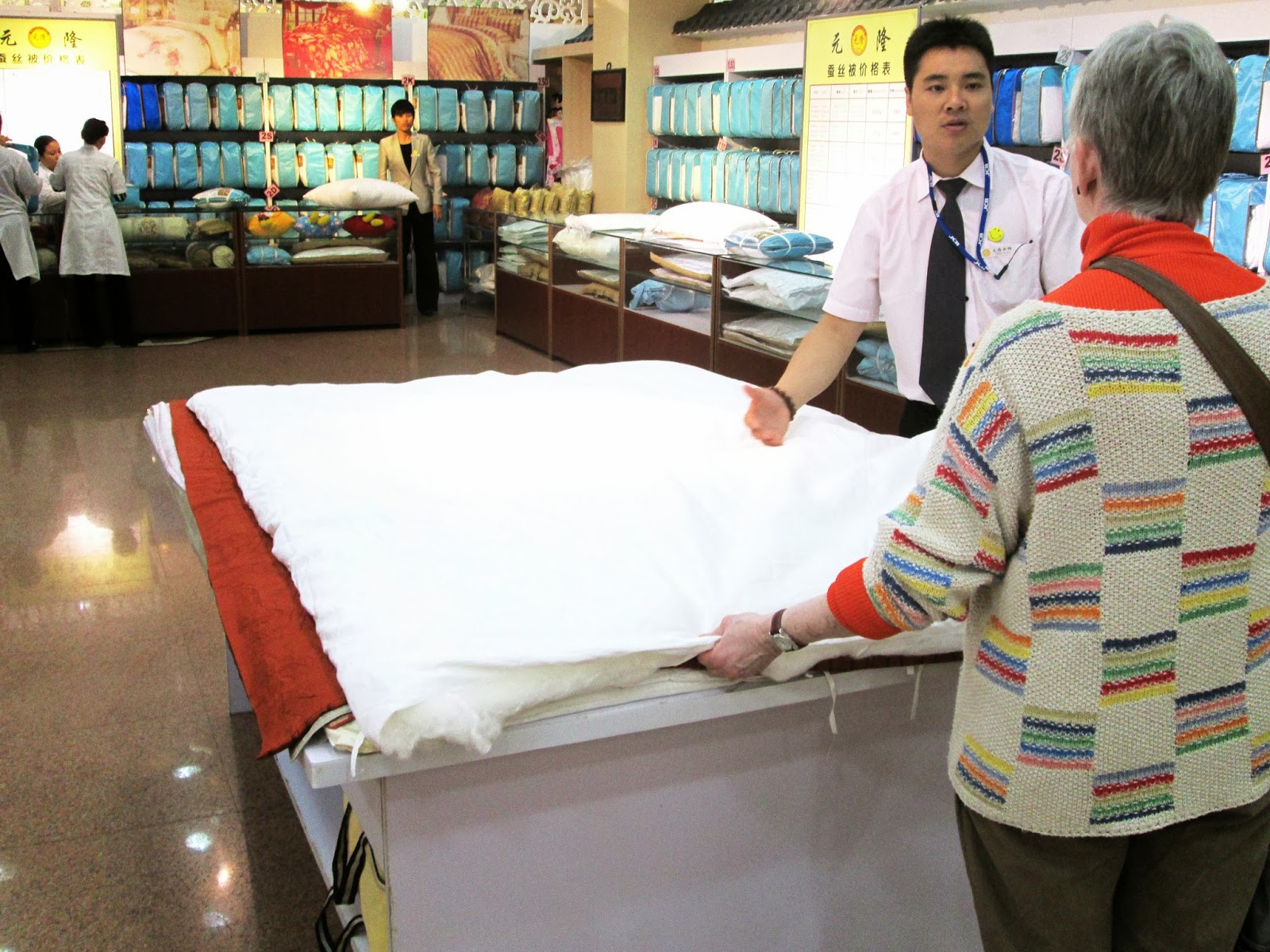 There are sizes for all mattresses and 2 weights, 2,000 gms and 2,500 gms.
In addition to the duvets, themselves, there are covers for purchase in evey size and conceivable color.  You can get a beautiful silk brocade or a more practical cover made from a combination of cotton and bamboo fibers. 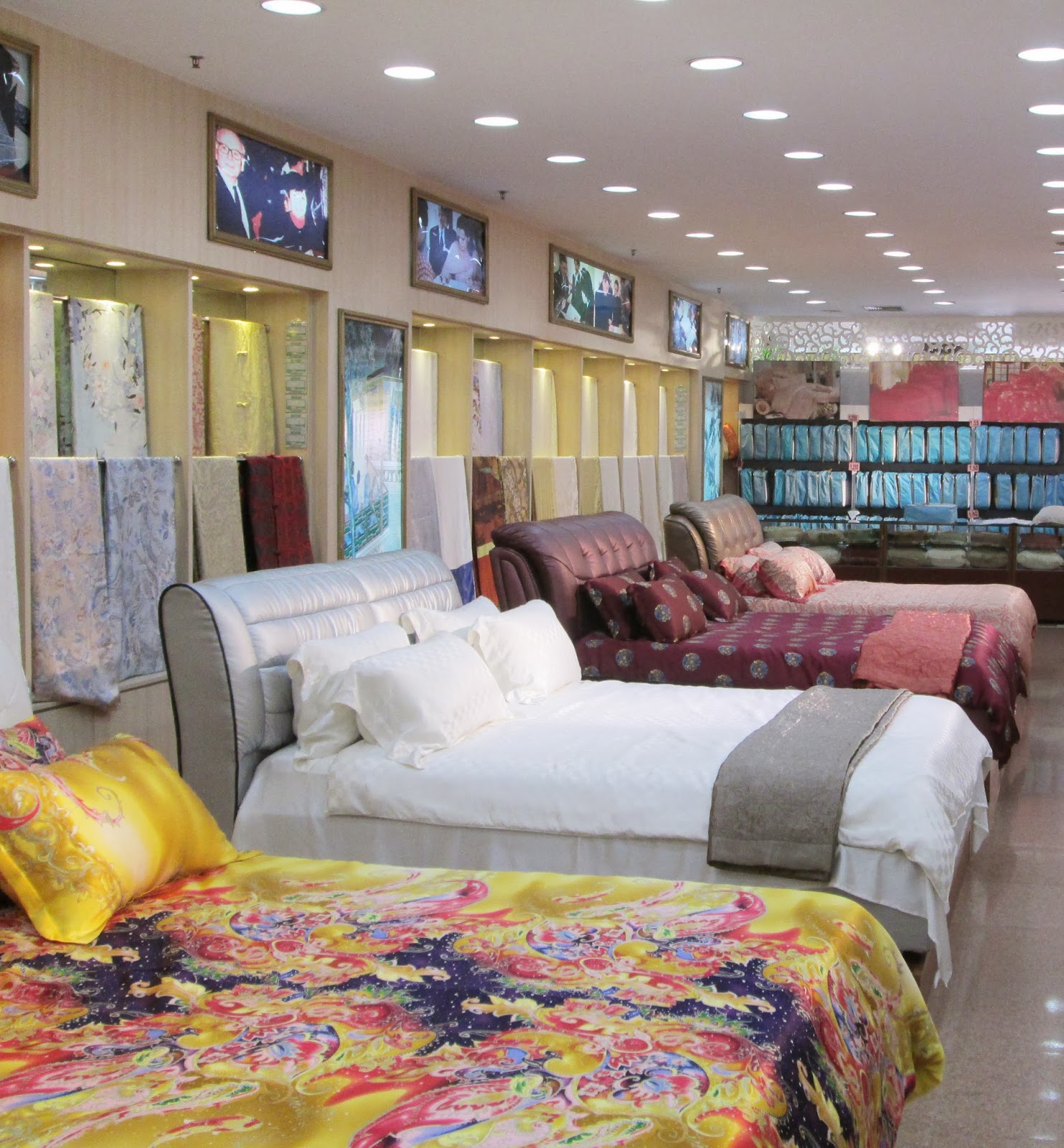 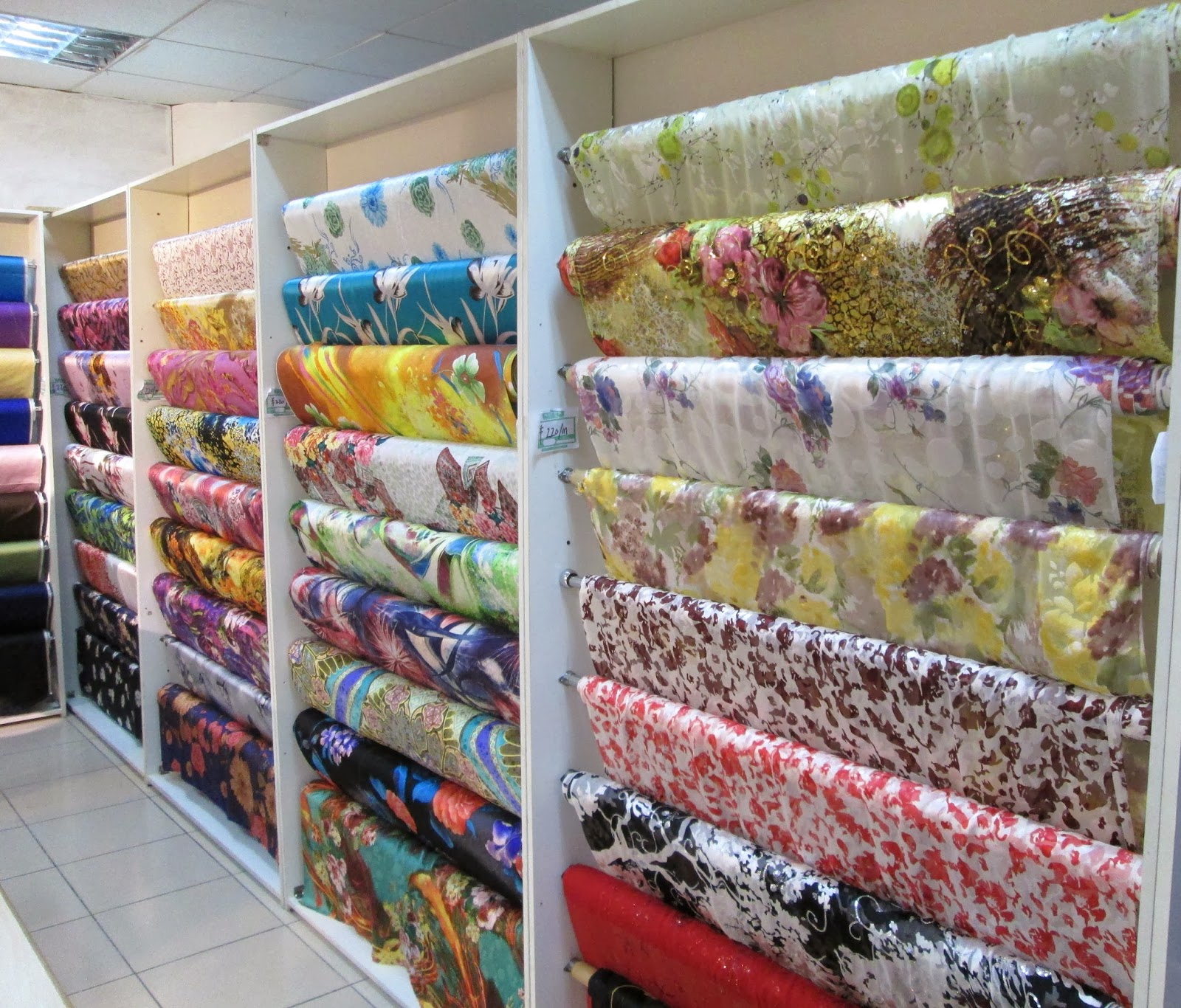 This product is possible because of the properties of silk filaments. Due to layers of protein build-up, silk is noted for its softness to the touch and brilliant sheen.  The basic filament has incredible fineness but is pound for pound stronger than steel, yarn only 1 mm in diameter will support 100 pounds.   It has impressive insulating properties and is mildew resistant. . 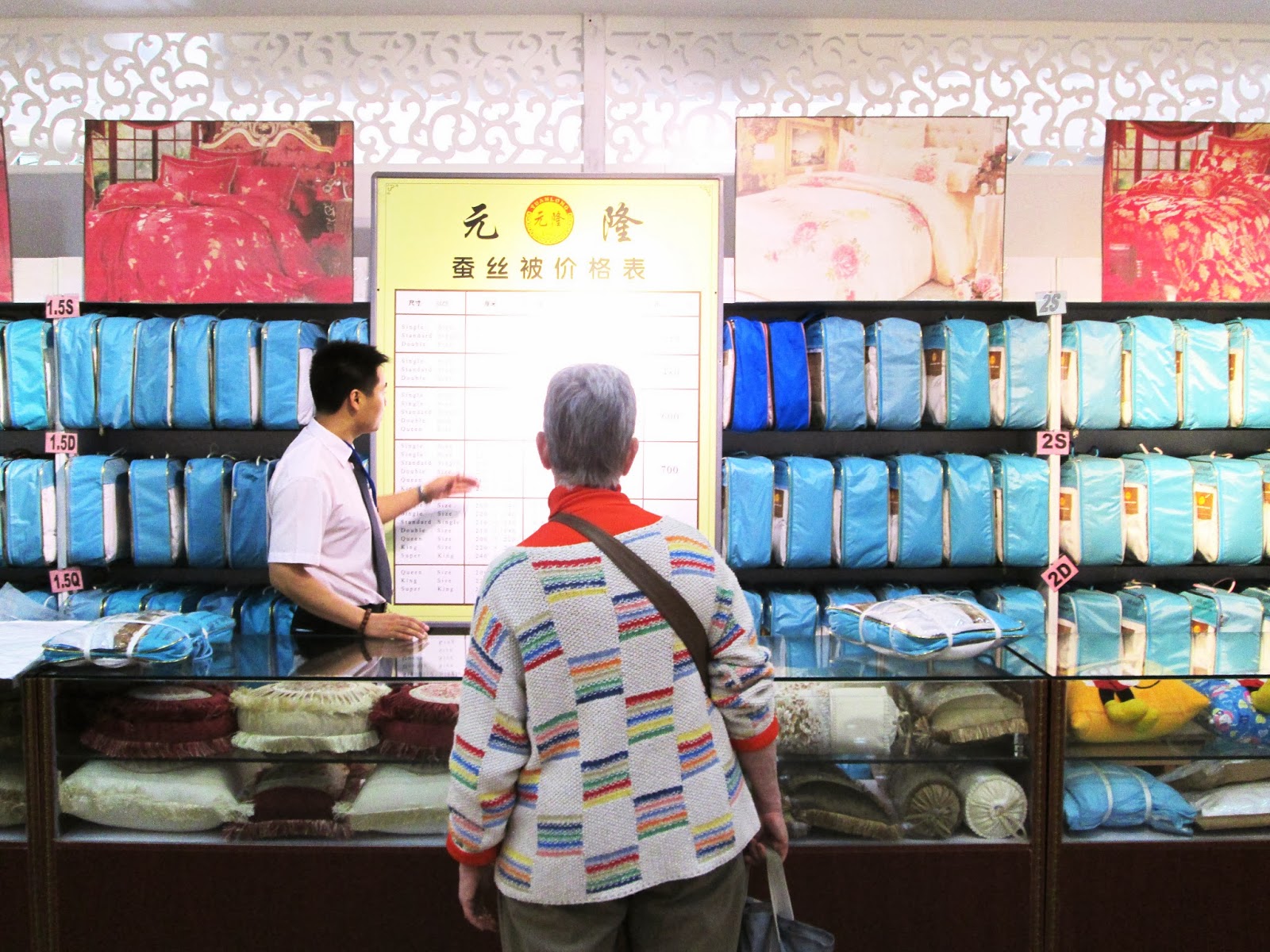 
I couldn’t resist with winter on its way.  It was so light that the compressed package fit easily into our luggage  So far, our duvet is surprisingly warm for its light weight,  and it will get much more use than a hand-tailored  suit!!!
Posted by Margy Norrish at 4:13 PM No comments:

Silk is a filament secreted by  the silkworm when spinning its cocoon, and the name for the threads, yarns and fabrics named from the filament.  Most commercial silk is produced by the cultivated silkworm, Bombyx mori.

The secret of silk production was a closely guarded Chinese secret.  The penalty of revealing this secret was punishment by death. Inevitably, the secret was too valuable and there are several versions in folklore, which describe the lengths smugglers would go to steal the secret from China to sell it to the West  One tells of monks hiding cocoons in their walking sticks!!

Bombyx mori feeds exclusively on the leaves of various mulberry trees and spins a thin, white filament.  There are several varities of wild silkworms which feed on oak, cherry and mulberry leaves, but their filament is brown and coarse and 3 times the thickness of the cultivated.

Carefully selected moths lay 500-700 eggs apiece.  One ounce of silkworms requires nine tons of mulberry leaves to reach maturity, their cocoons will produce 12  pounds of silk.
Eggs take 14 days to mature into larvae.  The larvae are raised on trays kept in a temperature-controlled, clean  environment and are fed every 2-3 hours. Fully grown in approximately 5 weeks, they are 70 times their original size.  Their rear silk glands produce an animal protein called fibron which is activated and sent to silk producing glands.  The silkworms are placed on a bed and enter the pupa stage, enclosing themselves in a silk filament in an endless series of figure-eights (300,000 times) 1 ½ miles in length.

Eight to nine days the silkworm changes into a moth and must emerge from the cocoon.  To do so it produces an enzyme to soften the cocoon and produce a hole, from which it emerges.  Since the enzyme is destructive to silk fibers , the fibers break down from their mile-long filament into shorter  segments of random length, ruining the silk threads.  (These waste cocoons are used to spin noil, to make various products but are not suitable for fine silk thread production.)  To prevent this, at the factory the cocoons are gassed, boiled or steamed, killing the silkworm.  Of course, enough moths are allowed to hatch so that egg-laying can continue, 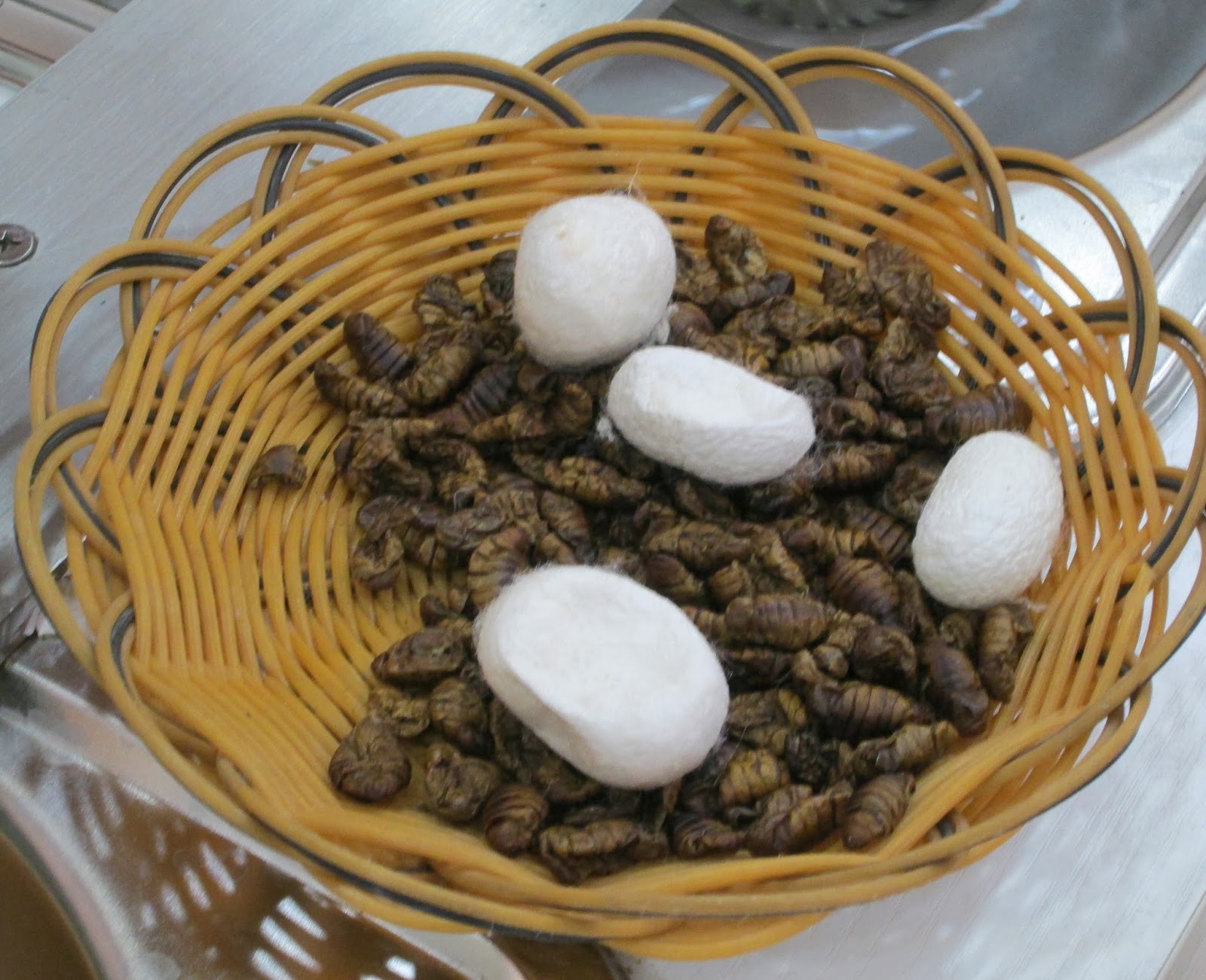 Intact cocoons.  Dead pupa taken from cocoons prior to reeling.  Fear not, these are an excellent source of protein and are use in the cosmetic industry.

After drying the cocoon are inspected and graded and sent to a filature (factory) for reeling..Today, automated reeling machines are equipped with sensors, allowing for immediate replacement of empty cocoons or broken filaments. The silk filament is made stronger for weaving by plying, called throwing,  increasing the twist or adding more strands together.

Skeins of silk are formed into bundles (29) and collected into bales (132#), the amount raw silk is traded for export. 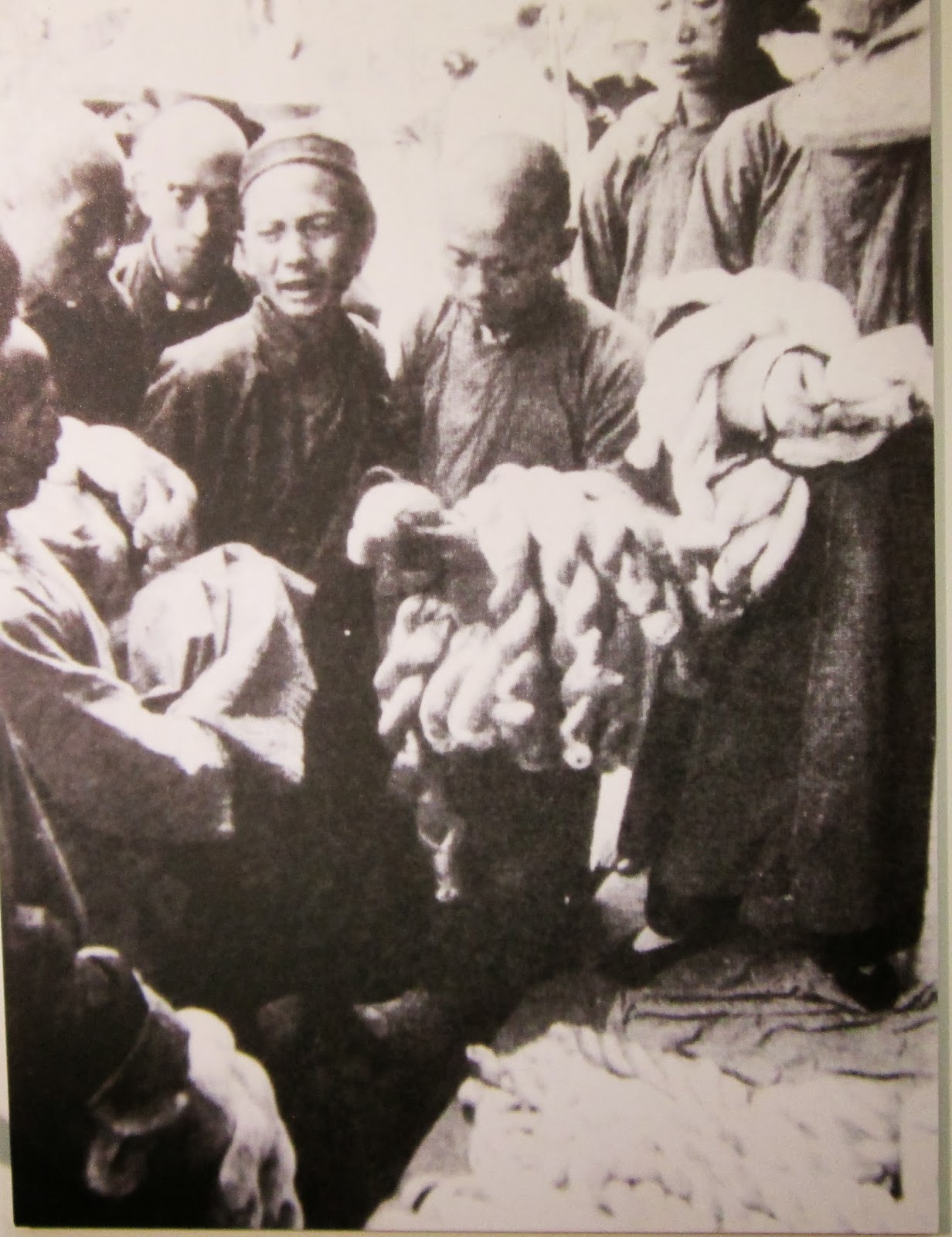