We recently returned from a short trip to Italy, beginning with Milan during Fashion Week.  Milan, capital of the Lombardy region in northern Italy which stretches from the Alps bordering Switzerland to the flat plain of the river Po, is both the financial and fashion capital of Italy.  A fashion design rival of both New York and Paris, Milan hosted more than 60 fashion shows and more than 80 presentations with  800 showrooms throughout the city.  “This is an Italian city of progress and change” stated “King” Giorgio Armani.

Before a glimpse at the fashions for spring, 2028, let’s take a walk through the so-called “fashion quadrilateral” ( Via Montenapoleone, Via della Spiga, Via Manzoni. And Via sant’Andrea). Flagship stores from Armani to Versache  along with many independent boutiques offer a window-shoppers dream.  The one word I thought of as I viewed the fall and winter displays was “texture”.  Designs were often of several fabrics, heavily textured (some bulky).  The addition of animal furs ( and hair) both faux and real  added additional layers which, at times appeared to be in their natural state.  Long rovings of slightly curly fleece-like material hung from the waist or hem of garments.  (I called this the “wet English sheep-dog look”)  Other trimmings were fine textured, obviously synthetic and highly colored, Even handbags could not escape this furry look. 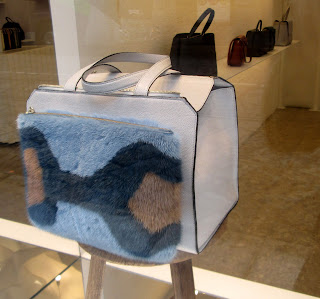 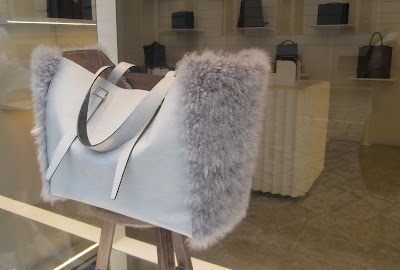 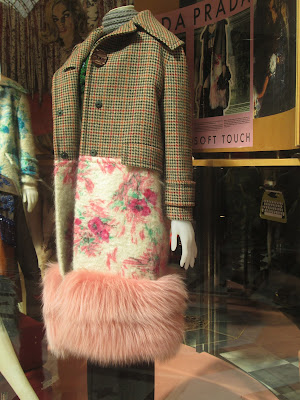 But you did not have to spend your Euros in the up-scale establishments, as the market stalls offered much cheaper versions. 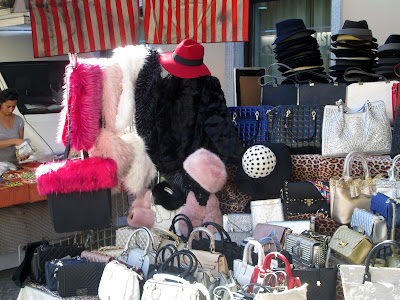 The promise of Spring was similar but slightly more refined.  Plaids and checks from head to toe and multicolored jackets worn with cowboy boots.  But there was also shimmer and glitz with Armani’s shiny black suits and iridescent fabrics from Gucci.  But fear not, fringe was still shown , now floating on the hemline of long dresses.

Though those of us who do not walk the red carpets , do not greet heads of state, nor jet around the world with valets to care for their wardrobes can still appreciate these outpourings of fashion creativity.  The “trickle-down effect” soon reaches the ready-to-wear consumers and don’t we all want to be in fashion?
Posted by Margy Norrish at 3:12 PM No comments: