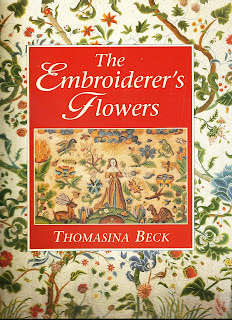 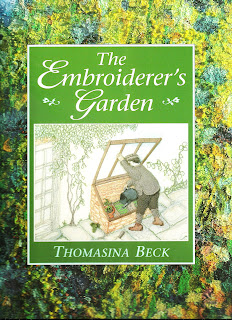 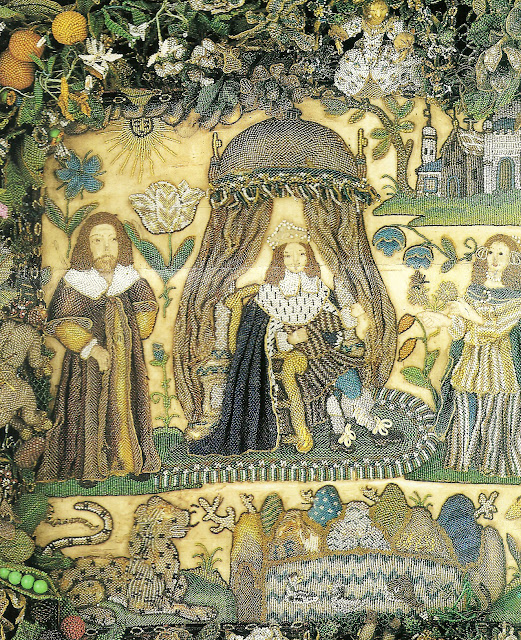 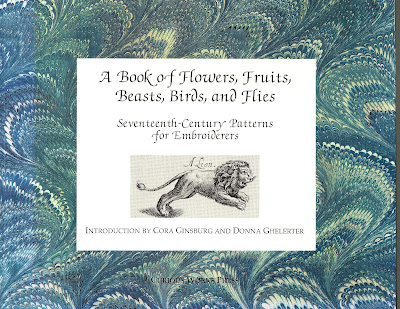 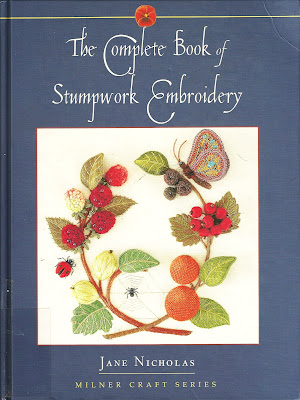 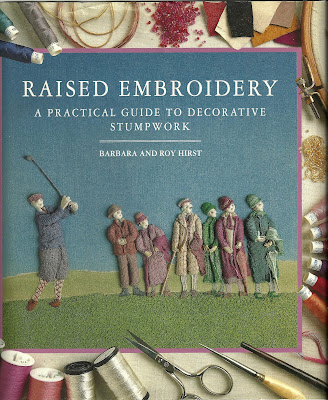 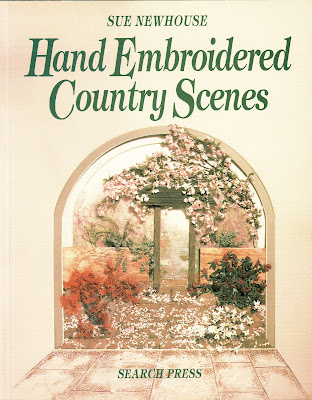 My next project might well be a small stumpwork, perhaps the view of my patio and the grape vines  growing across the portal.  Maybe not.
Posted by Margy Norrish at 1:25 PM 6 comments:

Paisley- The Teardrop of India     Part 2

In my blog of 6/28/15 I discussed the Paisley motif.  The most common association with this Indian motif is the Paisley Shawl, a much sought-after fashion accessory of the 18th and 19th Centuries. Although the term “shawl” today refers to a rectangular or square of cloth worn as a wrap around the shoulders or head, the word is derived from “shal”, Persian for any finely woven cloth.

For centuries the finest woven shawls came from Kasmiri, north of India in the Himalayas.  The wool fibers, which we refer to as “cashmere” are more correctly called “pashmina” and come from the underbelly of mountain goats. Indian  shawls were always handwoven in 2/2 twill tapestry weave on a horizontal loom, the technique known as “kanikar ". Colored wefts were inserted with small bobbins and, as in true tapestry weave, they did not extend from selvage to selvage but were confined to the actual pattern.   European woven shawls used a continuous supplementary weft which floated over the reverse. Produced as early as the 15th C Kasmiri shawls were introduced into the European market near the end of the 1700’s, however, they were extremely scarce and extremely expensive.

Because of their popularity despite the cost, European textile manufacturers began to produce what were called “imitation Indians”.  As it was not possible to import the fine pashmina wool  ( their experiments with raising the actual mountain goats in Europe, a failure) they firstly wove the shawls in silk at  Spitalfields using copies of the original Indian patterns.  Other cities such as Edinburugh and Norwich soon followed.  But it was  Paisley, Scotland that lent its name to this textile.  Because Paisley was a center for dyeing, printing and fringing, as well as weaving it soon became the major producer of the imitation Indian shawl.

However, it was the French textile industry that had the most impact on the shawl production as well as other fabrics of intricate woven designs.  In 1801, Joseph-Marie Jacquard developed a weaving loom, replacing the draw-loom.  In short order the British began weaving copies of the French imitations.

Another Kasmiri technique, amlikar, used embroidered motifs after weaving the plain ground fabric.  Because several artisans could embroider simultainously, the time to produce the textile was significantly shortened and the resultant cost to produce was much less. These embroidered shawls were so finely made that they are often confused with the woven ones

The actual paisley design and shape of the shawls, as well as the palette, varied with the lady’s fashion of the day.  Identification and dating of these textiles depends upon the following criteria:
1. distribution of the design
2. density of the pattern
3. repeat of the pattern
4. symmetry
5. contrast between the ground and design


6. shape and finished size of the textile 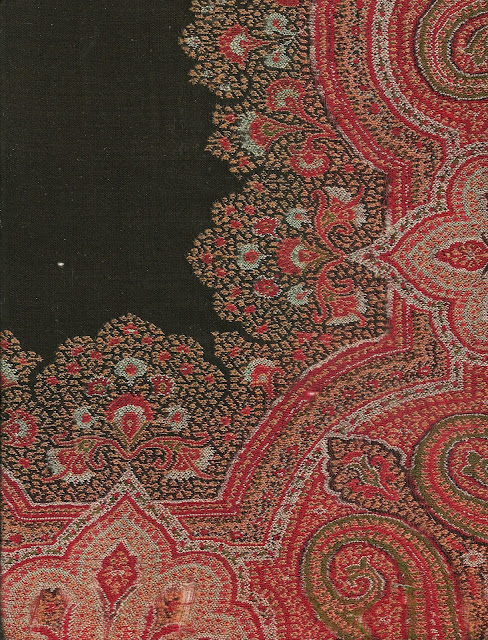 Section of a woven wool shawl.  Note the black background which formed a very large square in the center of the textile. 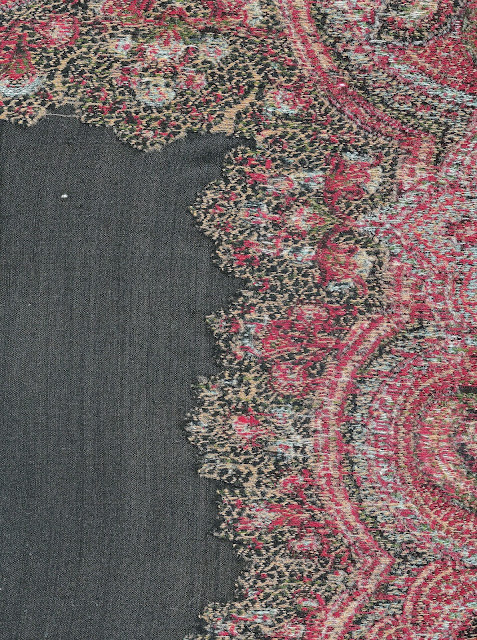 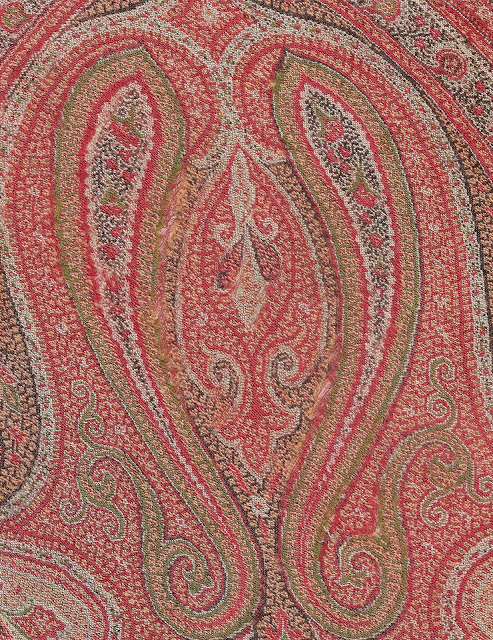 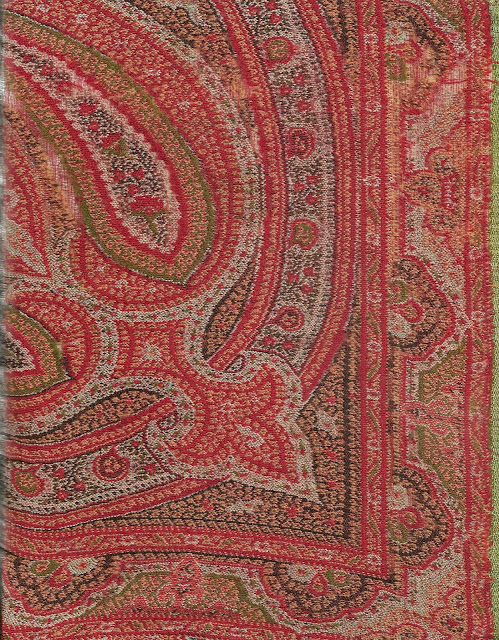 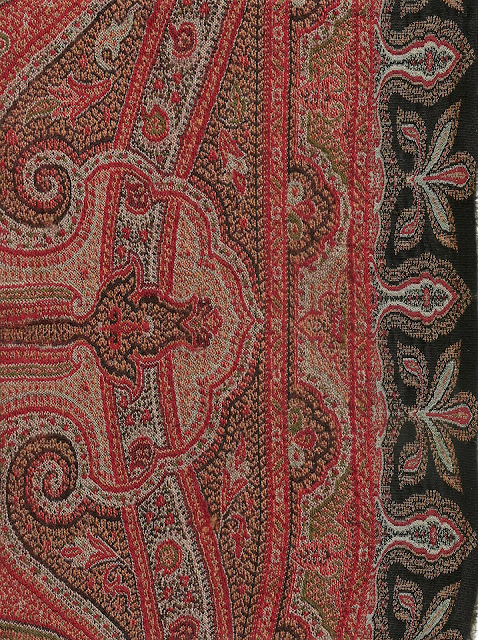 Fringe edge of shawl.  The fine black fringe is entirely missing in this section.

Woven paisley shawls may still be found, however, if they are in good condition they are pricey.  You may find these textiles in varying conditions and, depending upon the intended use, they may be repaired for table covers or sections may be salvaged for use as applique elements.  Printed paisley is more affordable.
Posted by Margy Norrish at 1:03 PM 1 comment:

Happy Birthday to us 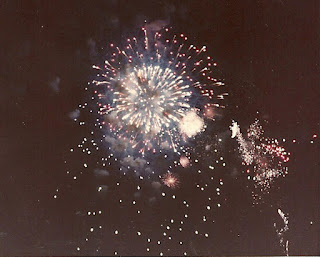 This holiday evokes fond memories for most Americans.  I grew up in a small town and on July 4 the town sponsored a parade featuring (usually in this order) the high school band in uniform, Boy and Girl Scouts in uniform, veterans in various uniforms of their branch of service, old men driving old vintage cars, and children of all ages on bicycles decorated with crepe paper and flags.  This procession would wind around the streets before finally stopping at the town cemetery.  At this point a senior from the high school would read the Declaration of Independence, then came the Pledge of Allegiance.  After all this celebration everyone would head home to prepare their  4th picnics 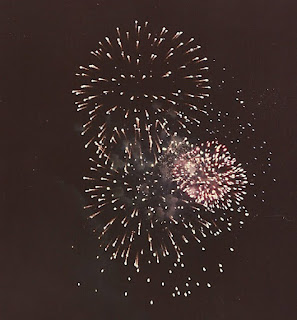 Here, in Santa Fe the day begins with Pancakes on the Plaza with patriotic songs rendered by the Community Concert Band.  Thousands of Santa Feans (and tourists) walk through downtown with small flags visiting craft vendors and inspecting the vintage cars display.  Then everyone heads for home to light up their BBQs.  I might suggest someone reads aloud from such papers as the Preamble of the Constitution or the Emancipation Proclamation.  Very powerful words we might reflect upon. 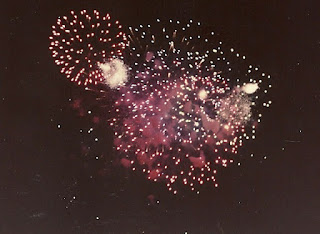 The textile du jour for this day is, of course, our flag.  It is seen everywhere in sizes from miniature to the huge one flying over used car lots and fast food restaurants.  They are seen on tee shirts and ball caps, on napkins and paper picnic ware.  There are other textiles created to honor our history.  Some are sentimental, some are political, some bring a smile and some not so much. 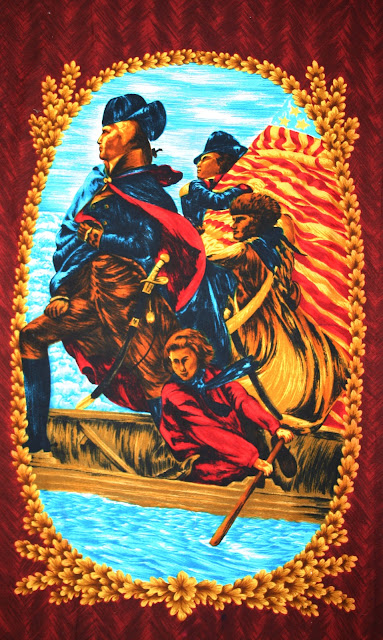 This textile is a panel measuring 43x23 inches depicting George Washington crossing the Delaware.  The colors are startling with vivid reds, blues and gold. The fabric is textured reminiscent of “bark cloth” (the fabric your grandma used to cover her patio furniture or perhaps used a draperies). This was produced by the Reliable Textile Company of NY under the trademark Wesco-Relex . Other subjects for similar textiles were patriotic motifs such as the bald eagle and, in a quite different vein, depictions of puppies and other cute animals. Supposedly, these panels were meant to be hung as panels or framed. What in the world could they have been thinking? Which brings me to a dilemma.  What in the world am I going to do with it?  Would you believe I have two Geo.W, and  friends panels.  Well, back to the bottom of my collection, I guess. Maybe someone might want to add them to their collection of patriotic memorabilia, hmmm? 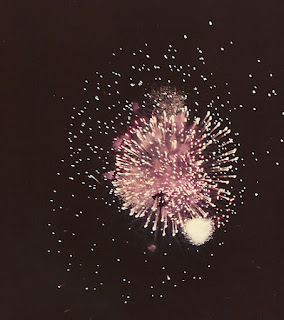