Easter usually signals the beginning of spring for many of us.  Flowers begin to bloom and the grass becomes greener.  Baby animals and birds appear, and heavy, winter clothes are replaced with pastel, lightweight attire.  When I was small, Easter also meant flowery hats and a corsage for my mother.

I reviewed my blogs of the past 3 years for textile images to share again and to celebrate spring. 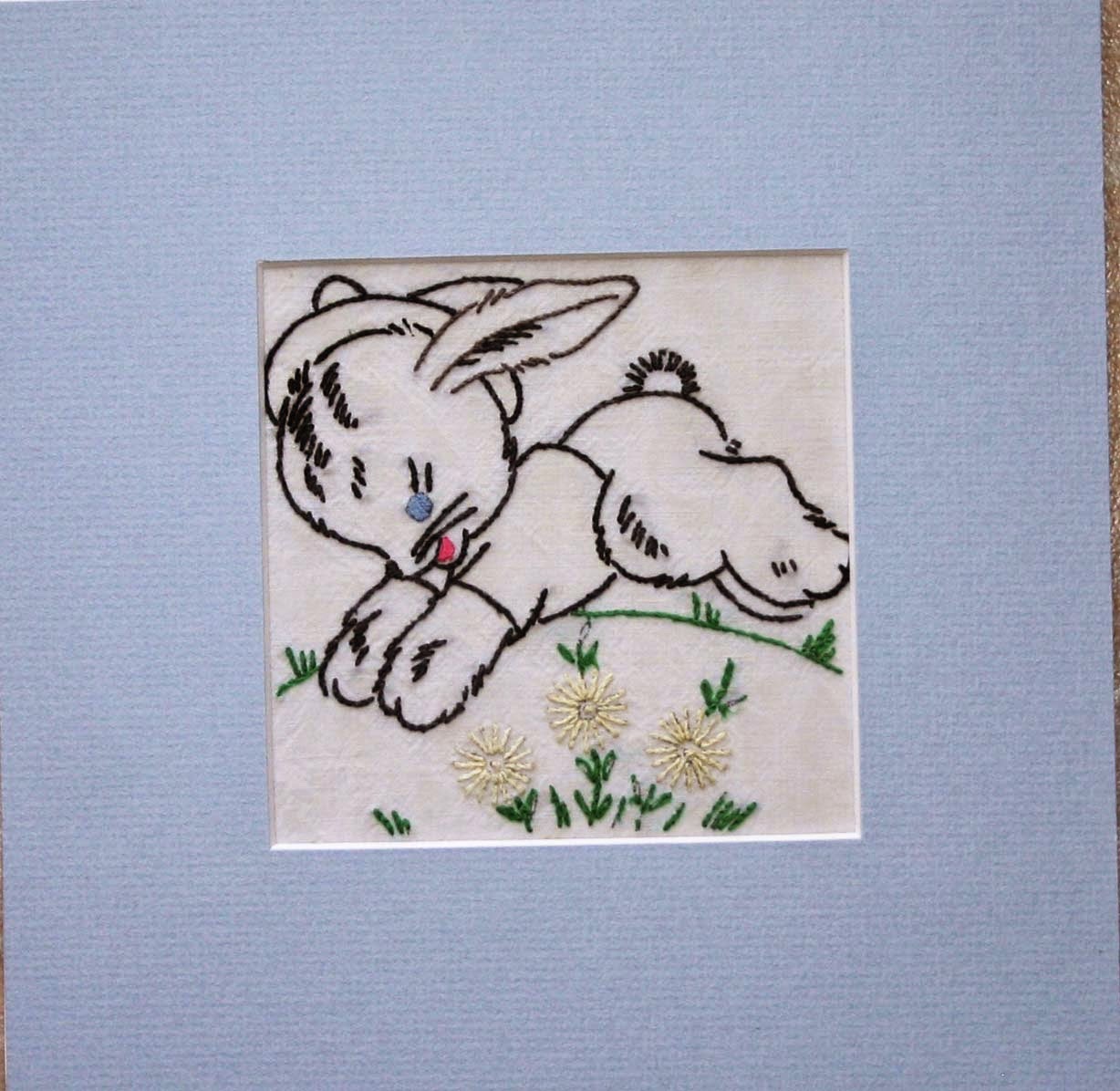 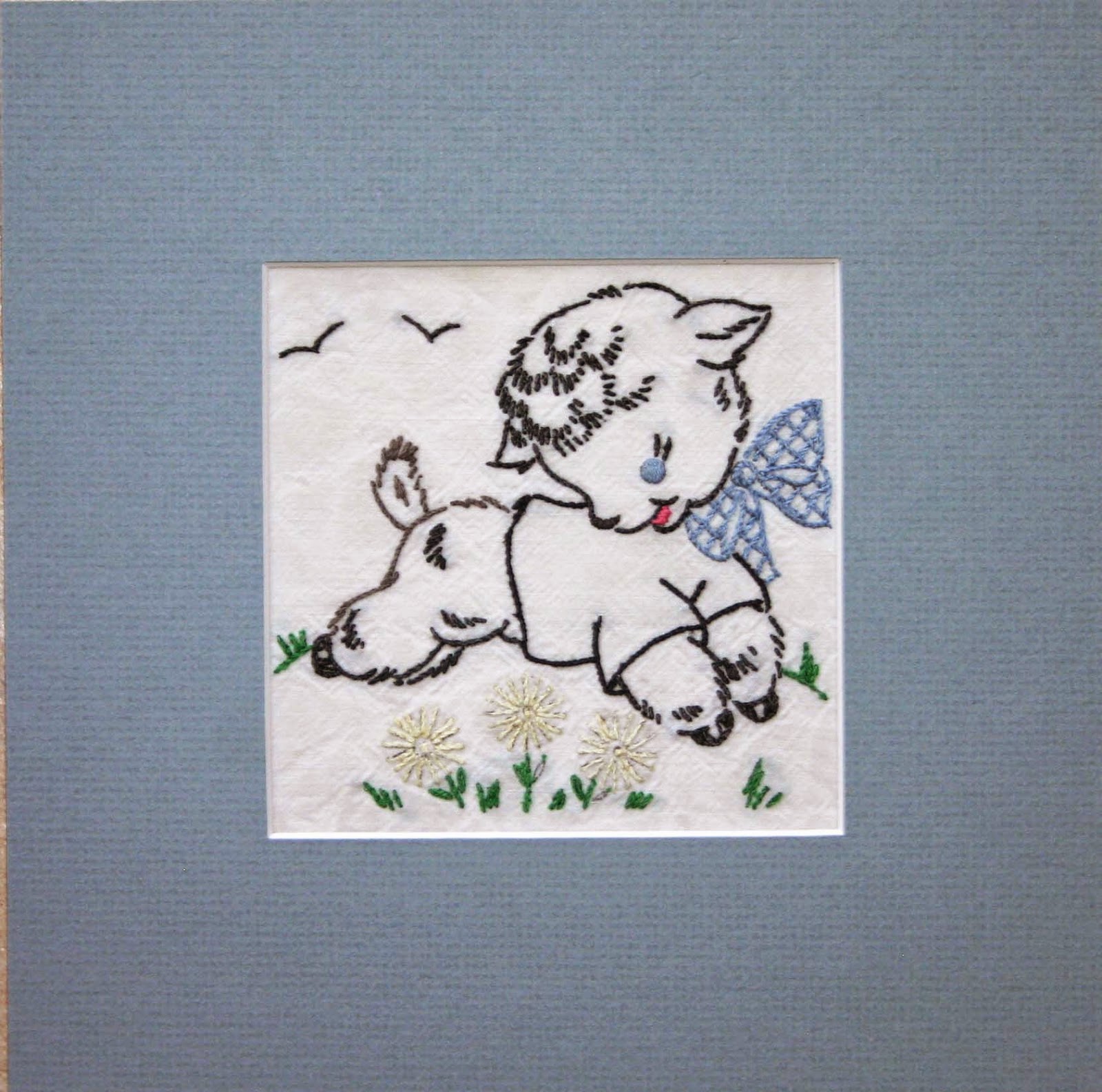 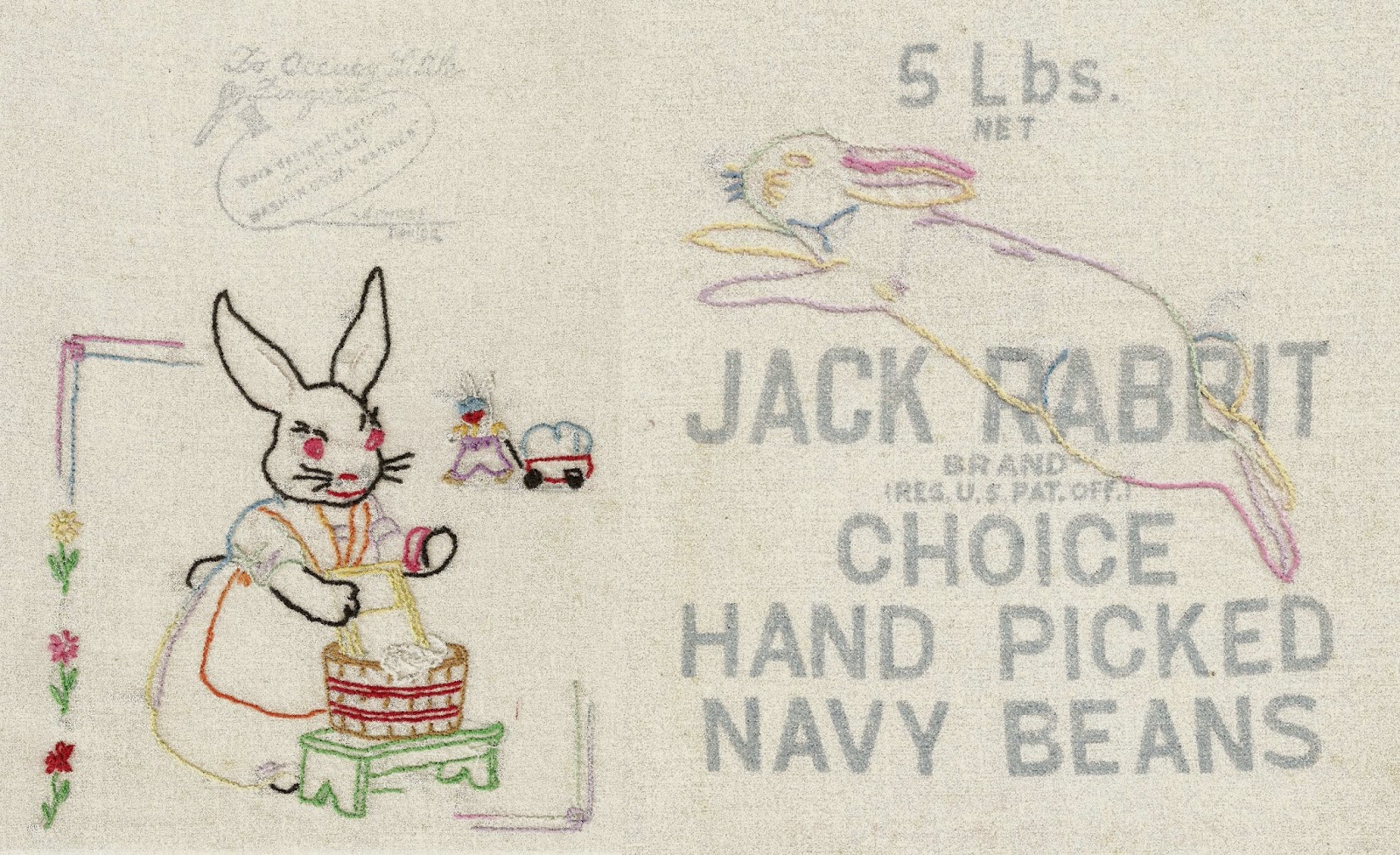 Embroidery on a pre-patterned feedsack.  Note the ink from the sack of navy beans was indelible. 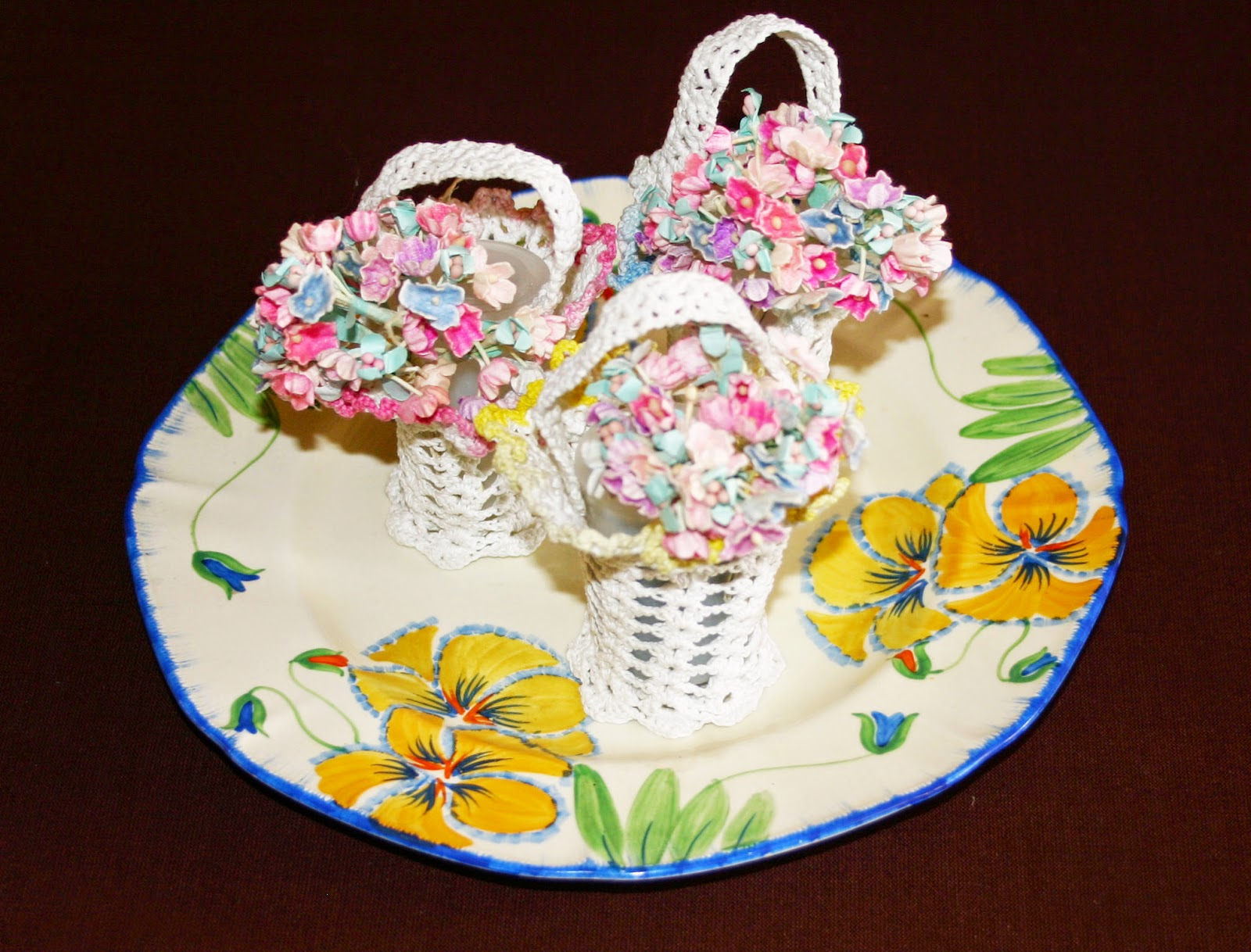 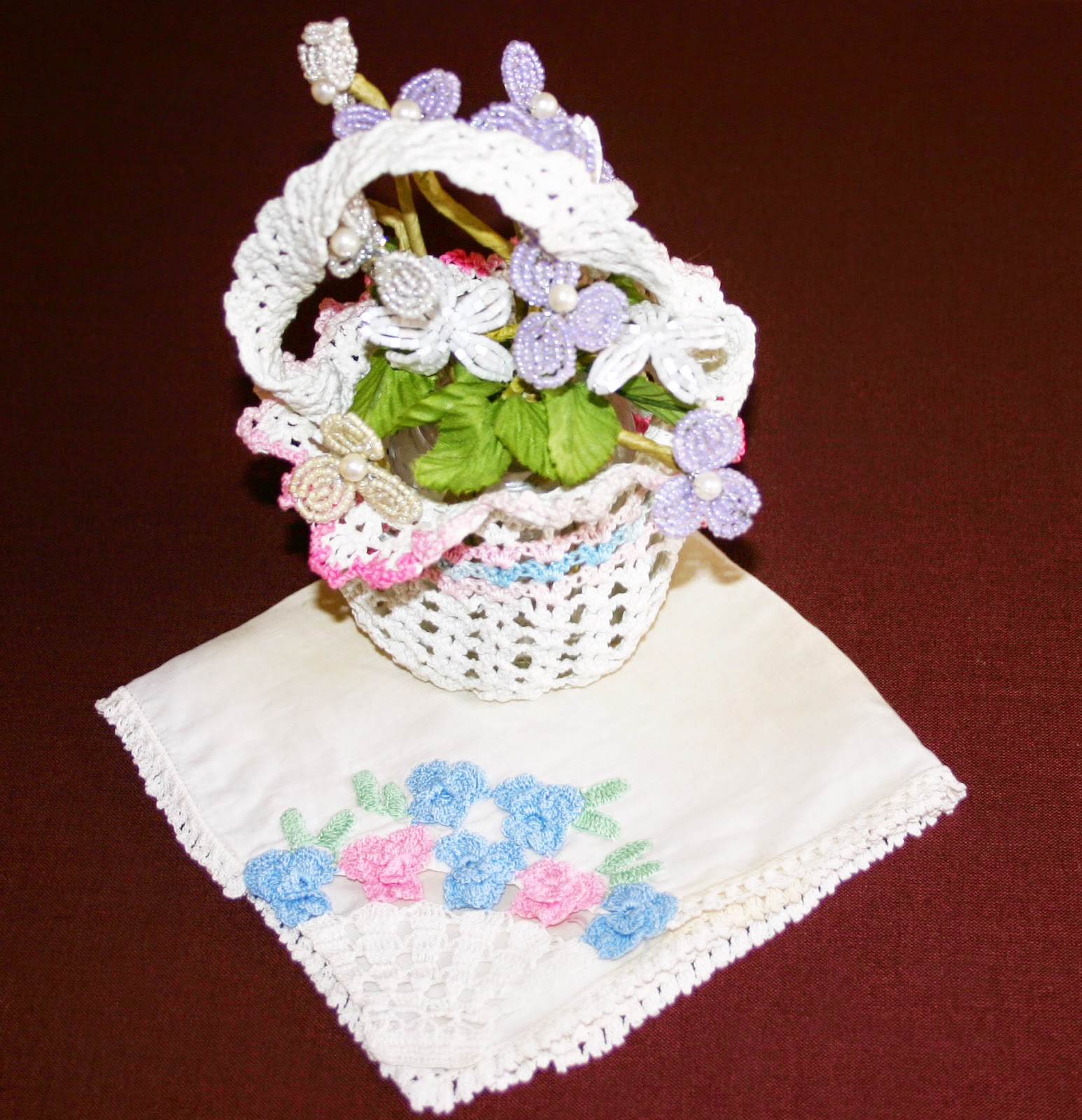 Candies for your Easter basket

These are the incredible ribbon creations of textile artist
Candace Kling


These are my humble creations. 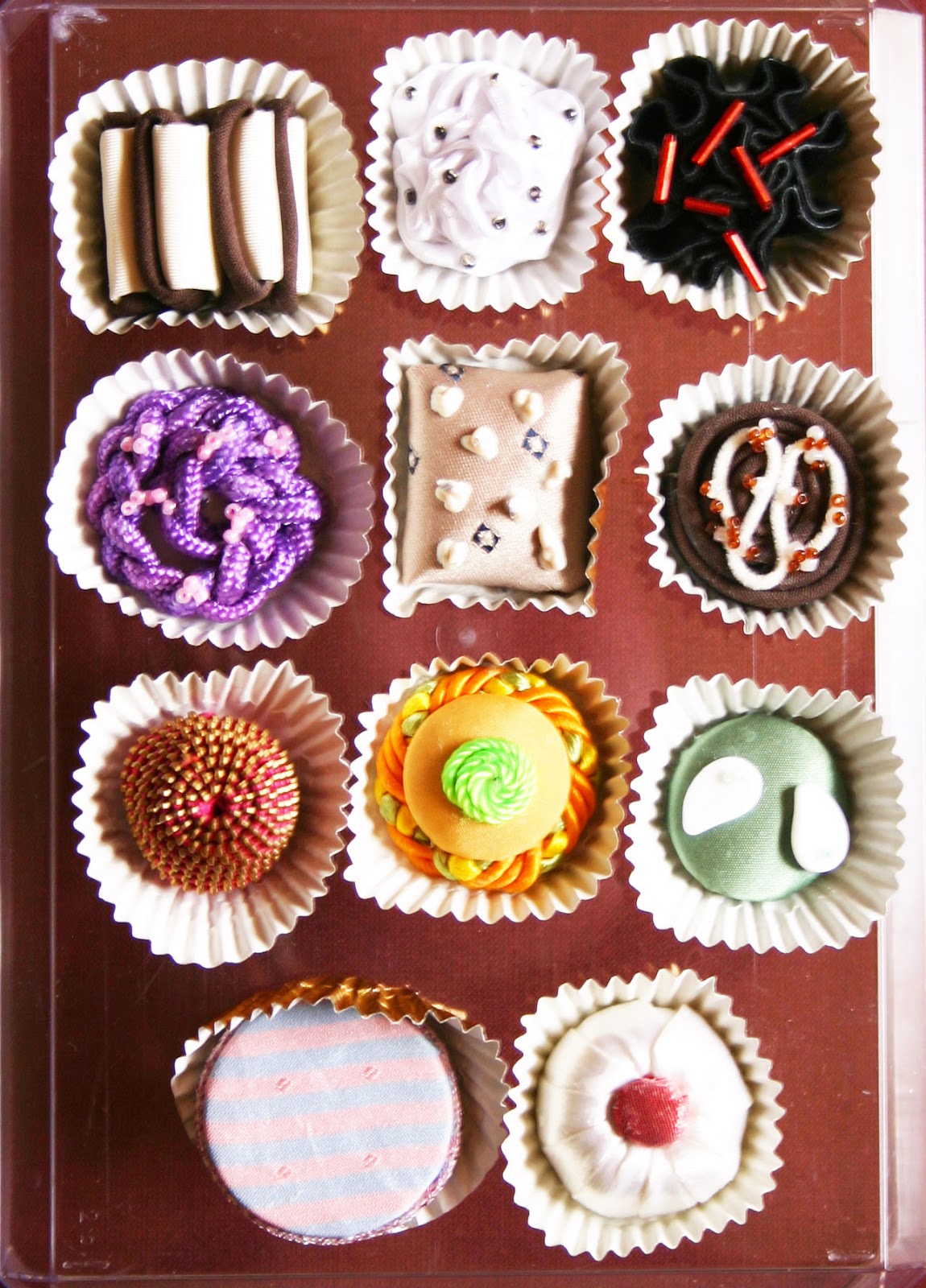 Spring is a renewal, so plant your gardens, take good care of our earth and enjoy the bounties of nature wherever you are.

Posted by Margy Norrish at 1:00 PM No comments:

This morning I was awakened by the chirping of birds outside the bedroom window, a sure sign of spring.  Birds are migrating north and house finches are building nests throughout the neighborhood.  We even have a pair of doves that roost in the grape vines that cover our patio roof lattice.

Early humans embellished their textiles as aesthetic expressions of their individuality or clan identity.  Feathers, beads and shells were popular materials used for this purpose.  Feathers, while plentiful were also more delicate than stones and shells and required some expertise to firmly attach them to textiles. 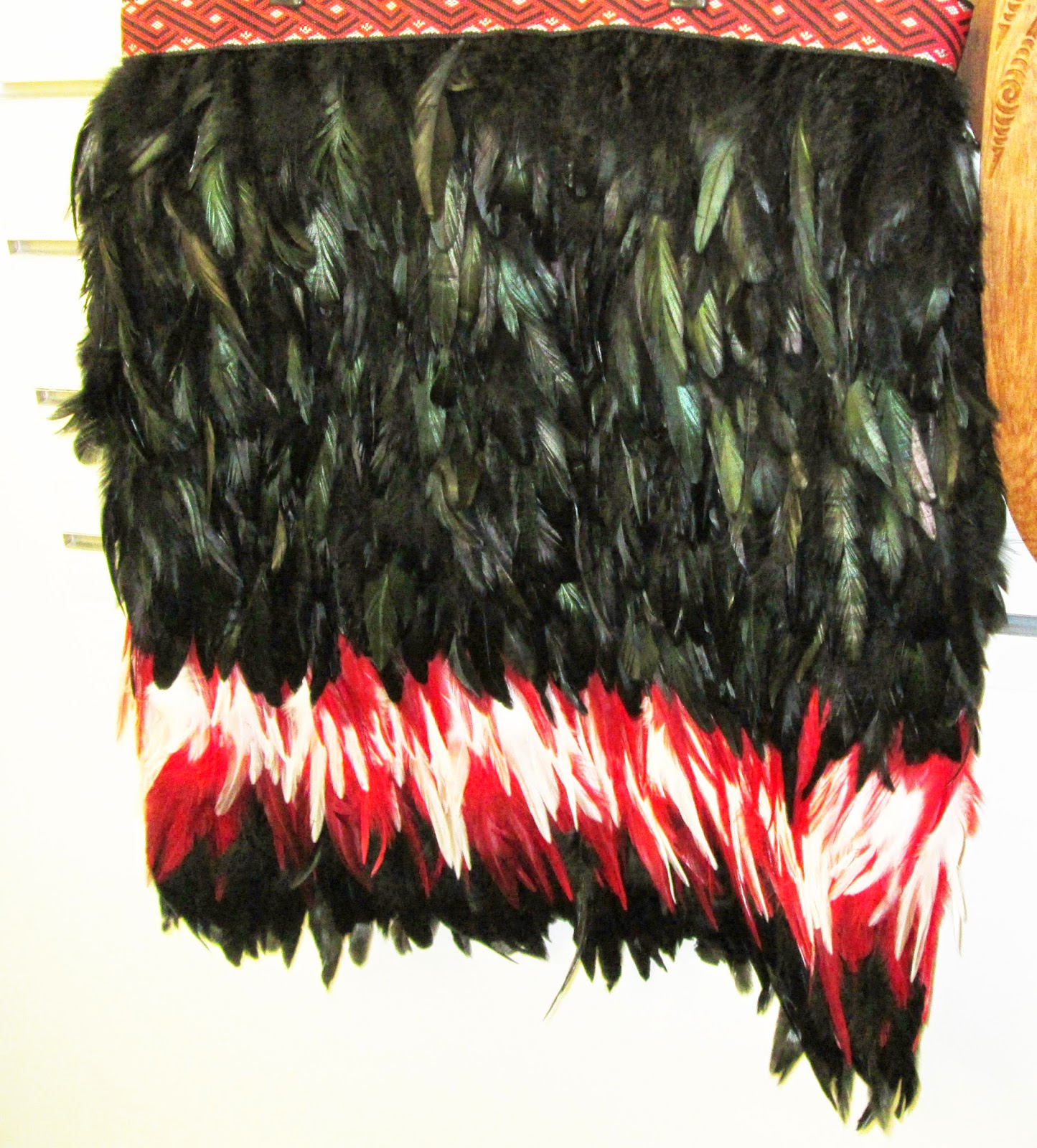 So popular were these garments that many birds were led to extinction, such as the  New Zealand Moa. 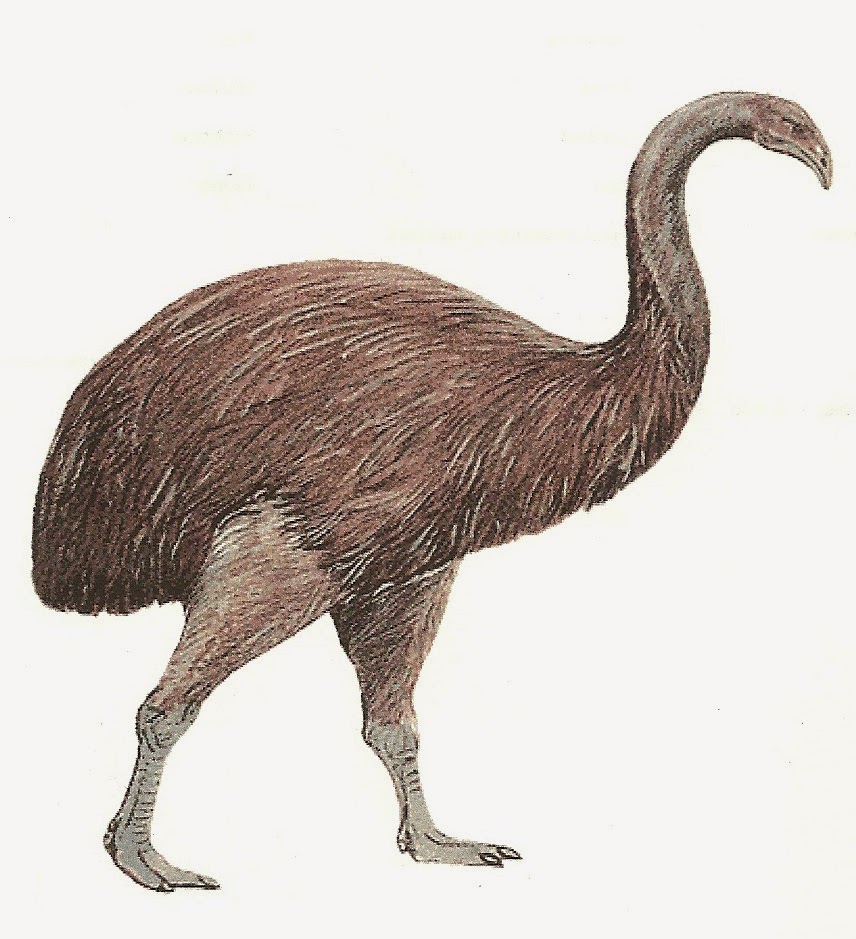 Moas were very large, flightless birds that made them easy prey.

Exotic birds produced splendid feathers that were incorporated into fashionable accessories for women with expensive tastes and more modest products were manufactured for the average consumer using more common feathers. 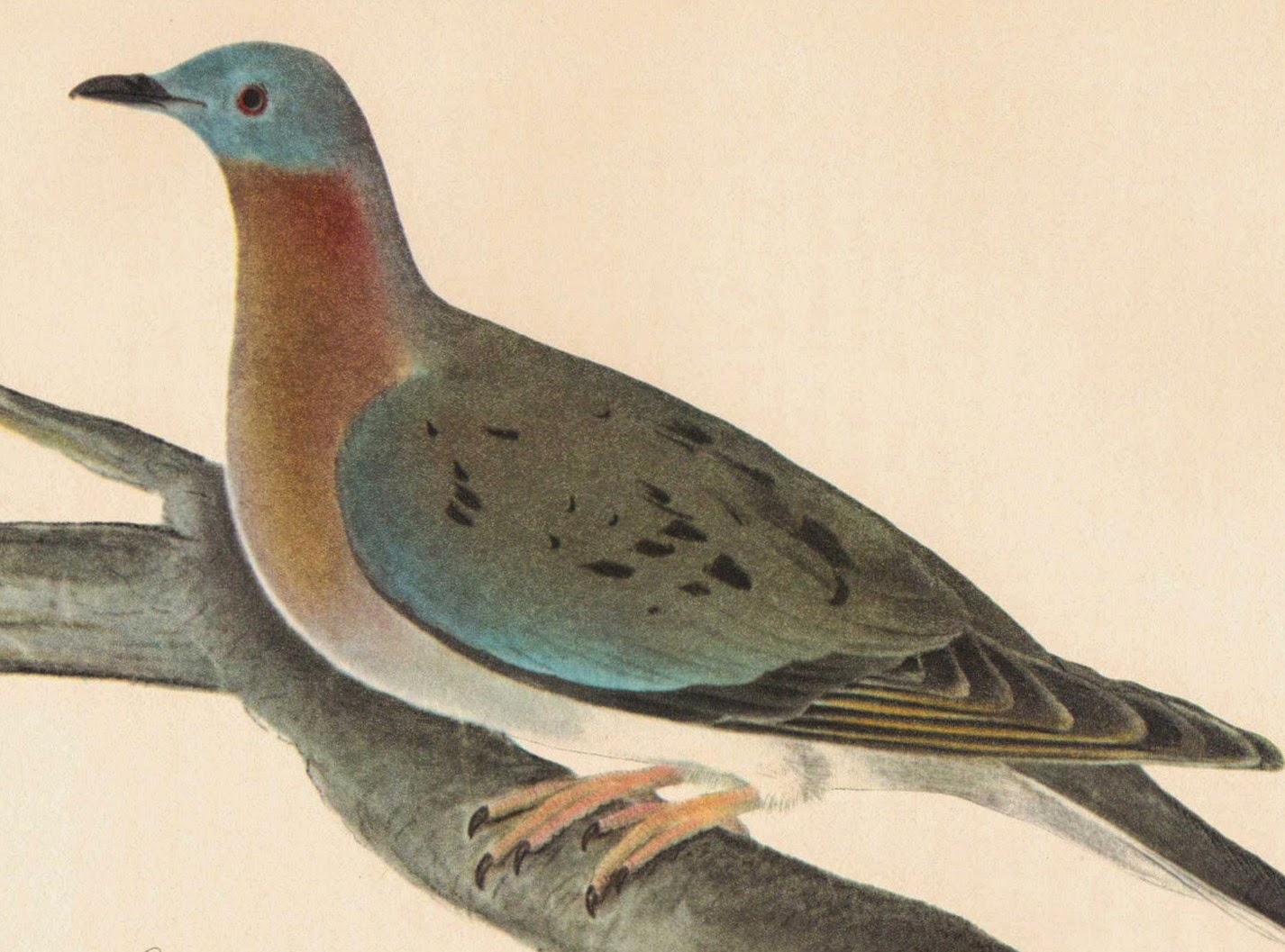 Passenger Pigeon feathers were in great demand in the 19th C as adornments, especially for womens hats.  While they were, at one time, the most populous bird in, perhaps, all the world they,too, fell into extinction.

Ostritch  feathers, because of there strength and size were popular materials for fans. 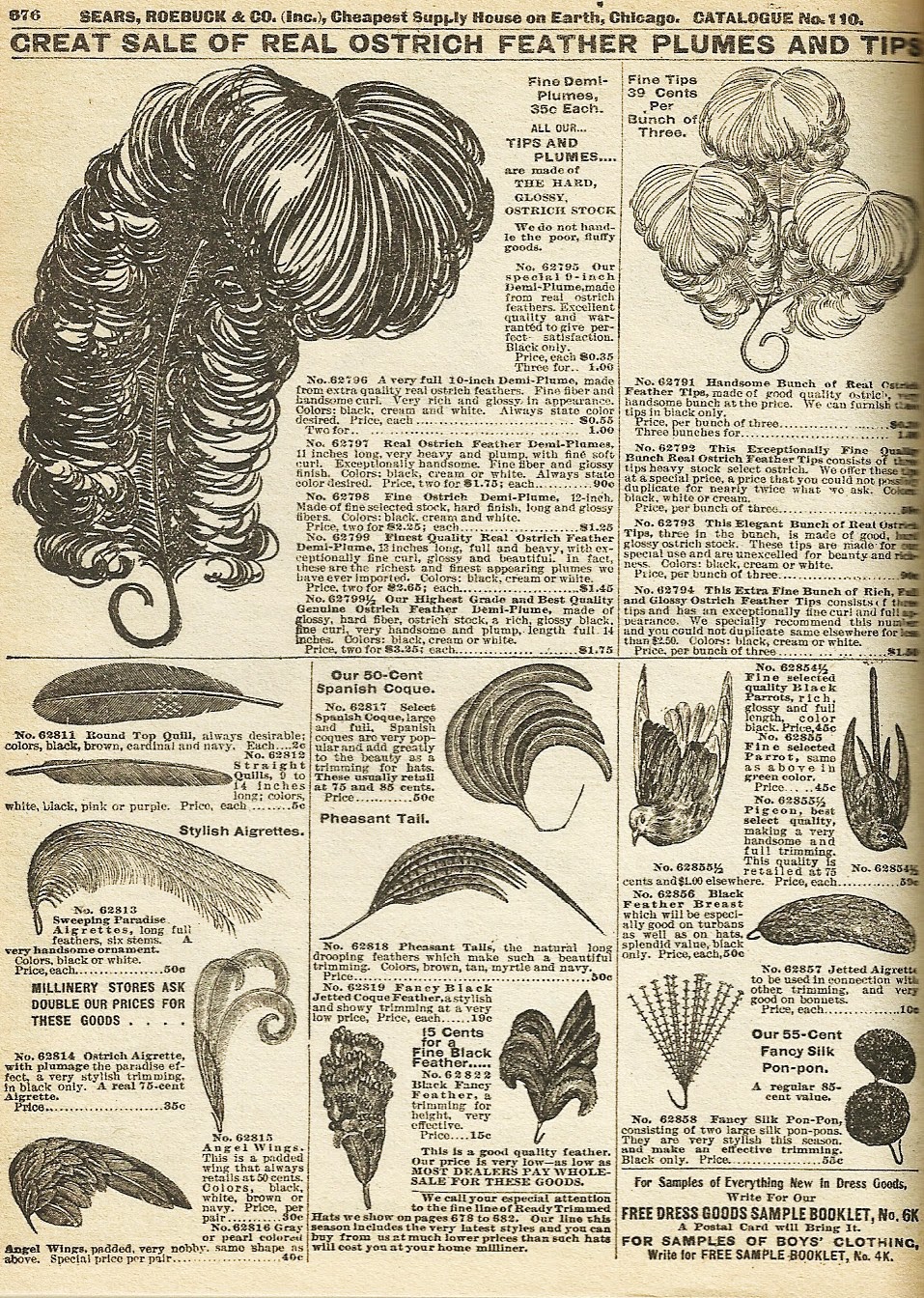 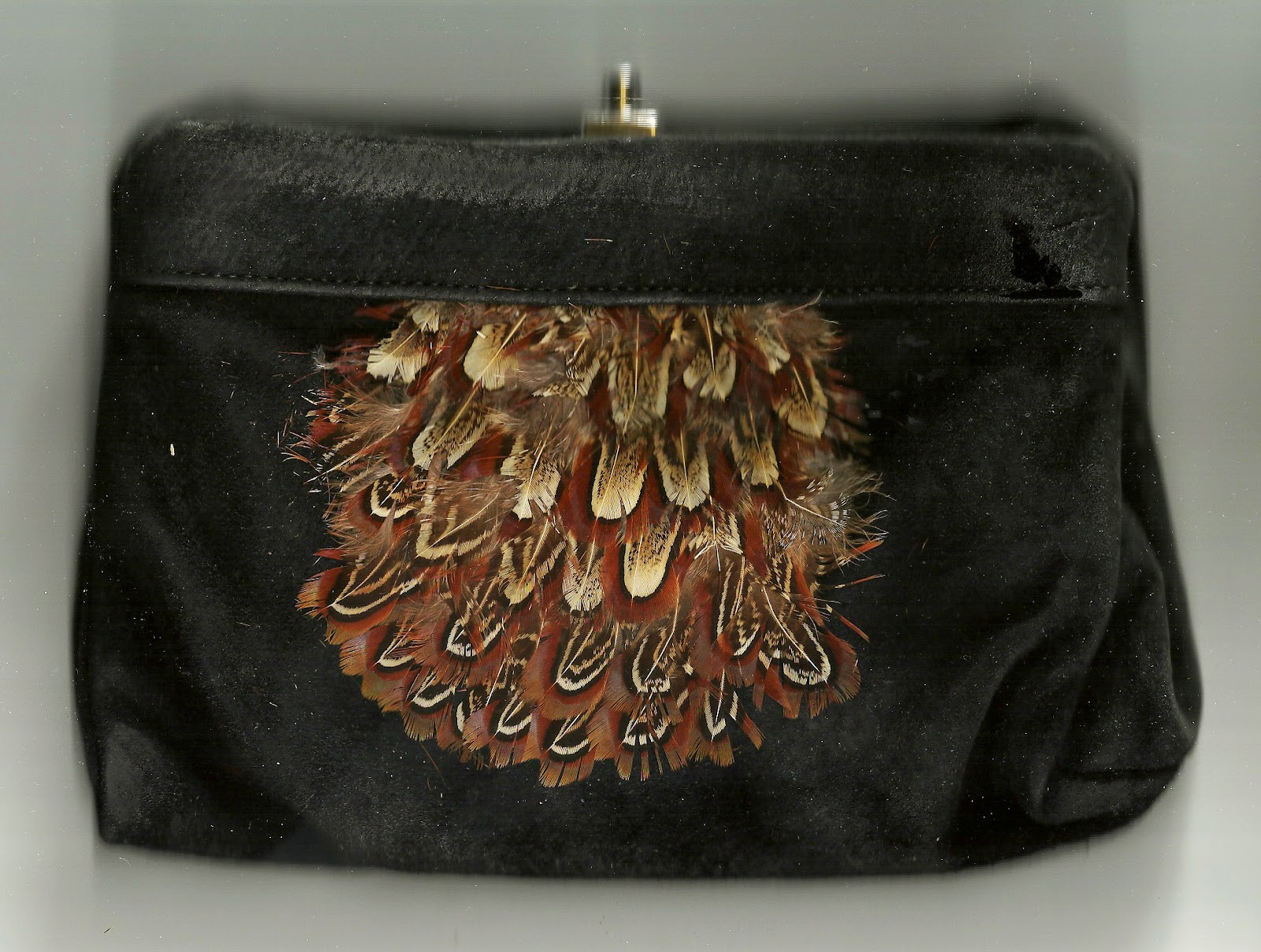 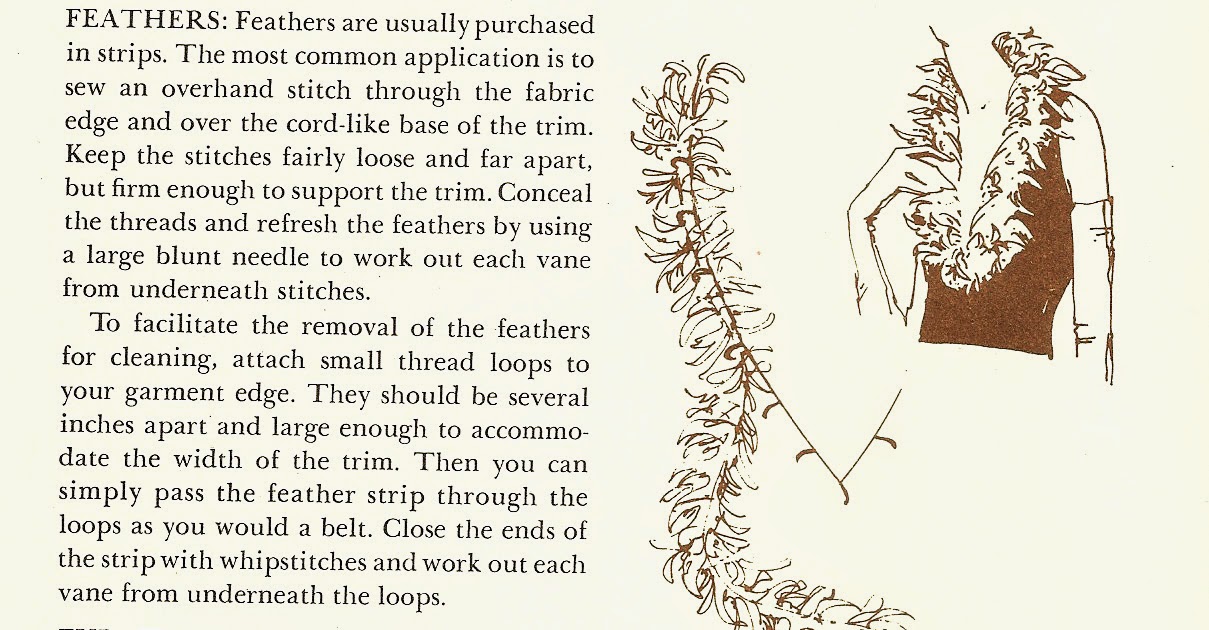 The Vogue Sewing Book, 1975, pg 392 describes the technique of attaching purchased strips of feathers.  They advocated "Don't be skimpy-use rows and rows of them for a lavish effect".

Today, couturier creations feature opulent garments adorned with masses of beads, sequins, pearls, lace and feathers.  While these are pieces of modern textile art they are not practical for the average wearer and feathered embellishments are now used as decorative elements on accessories.

Feathers can be purchased from craft shops as well as on-line.  Or you can gather them from under your bird feeders. 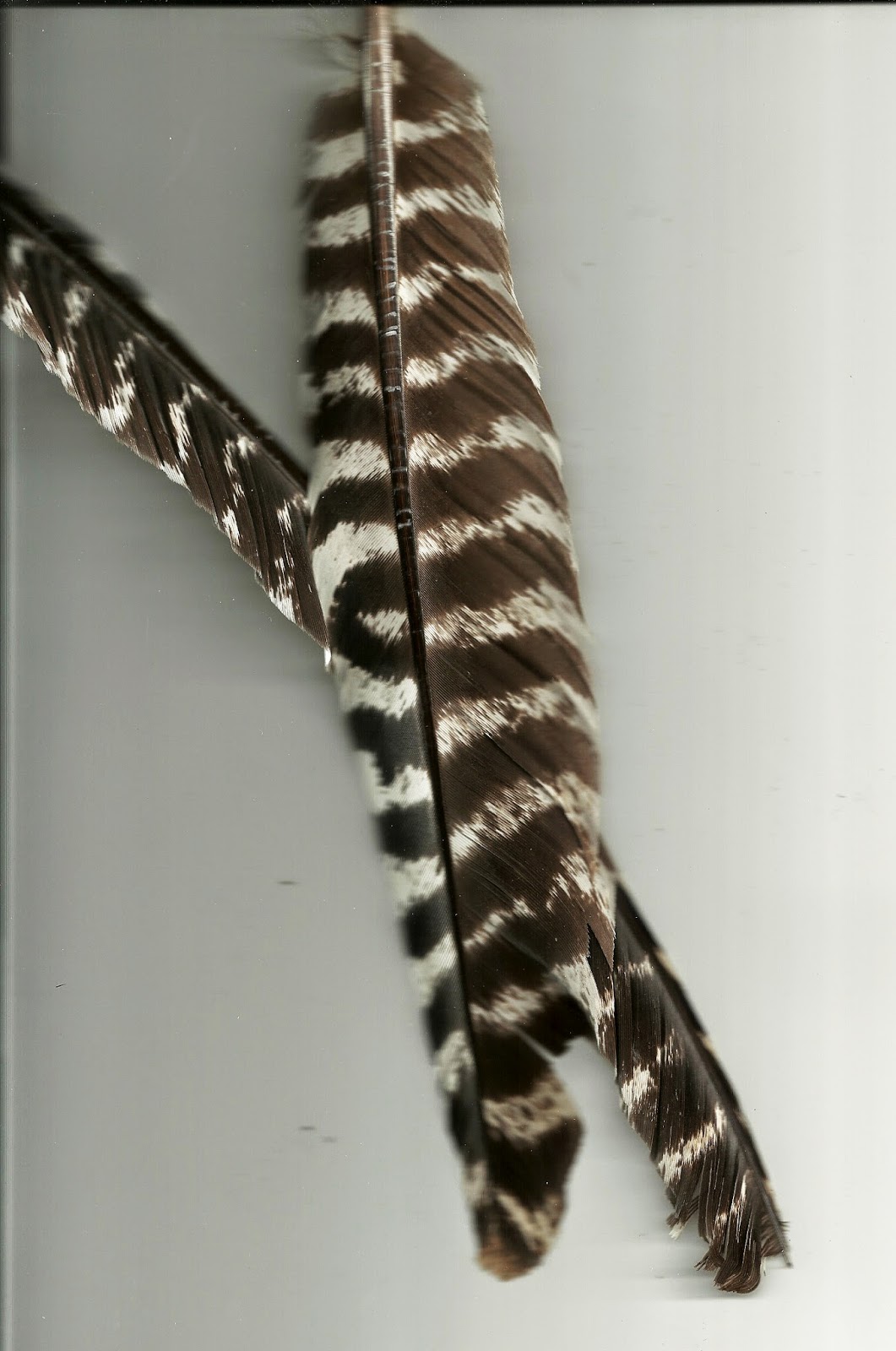 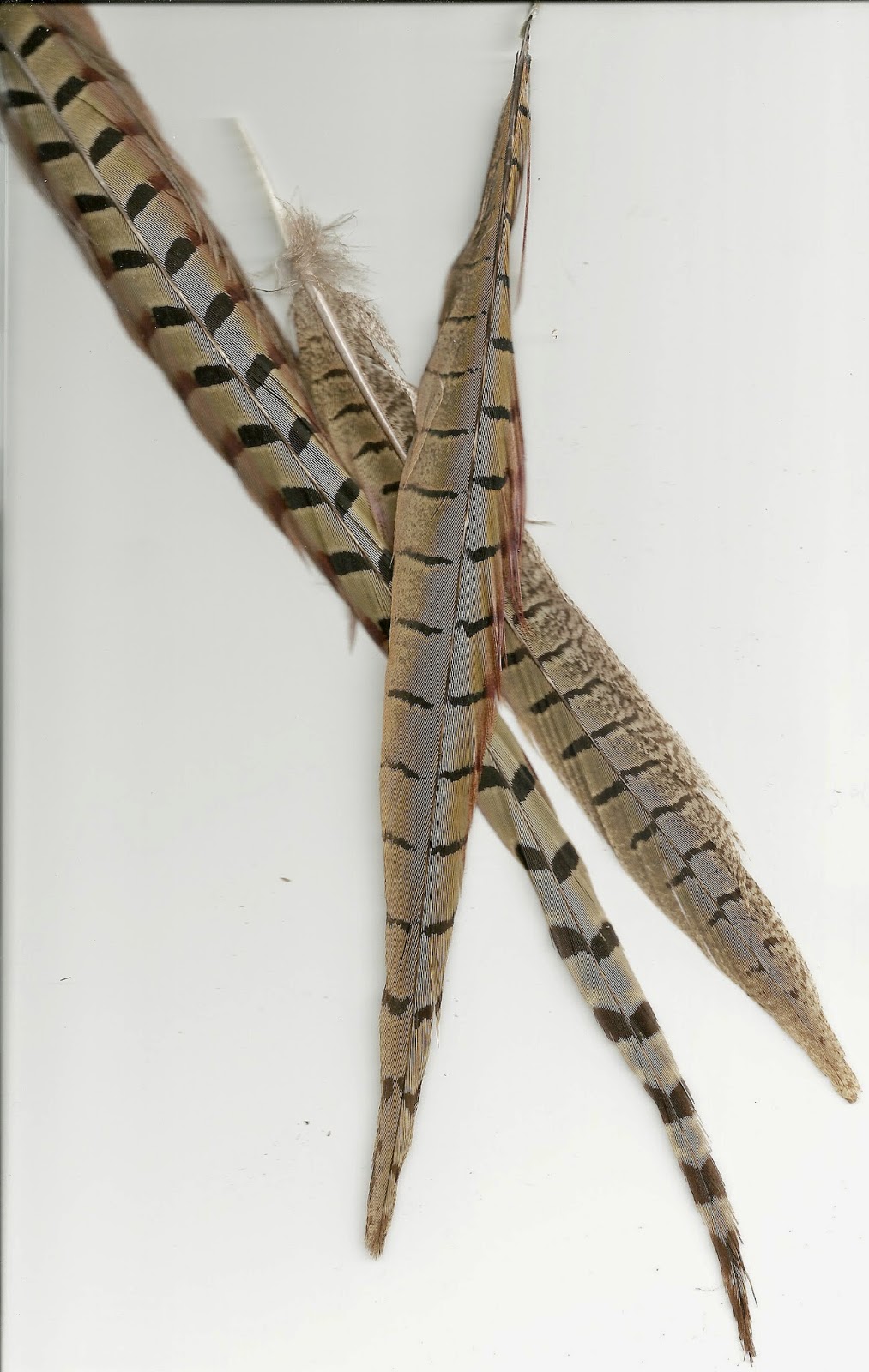 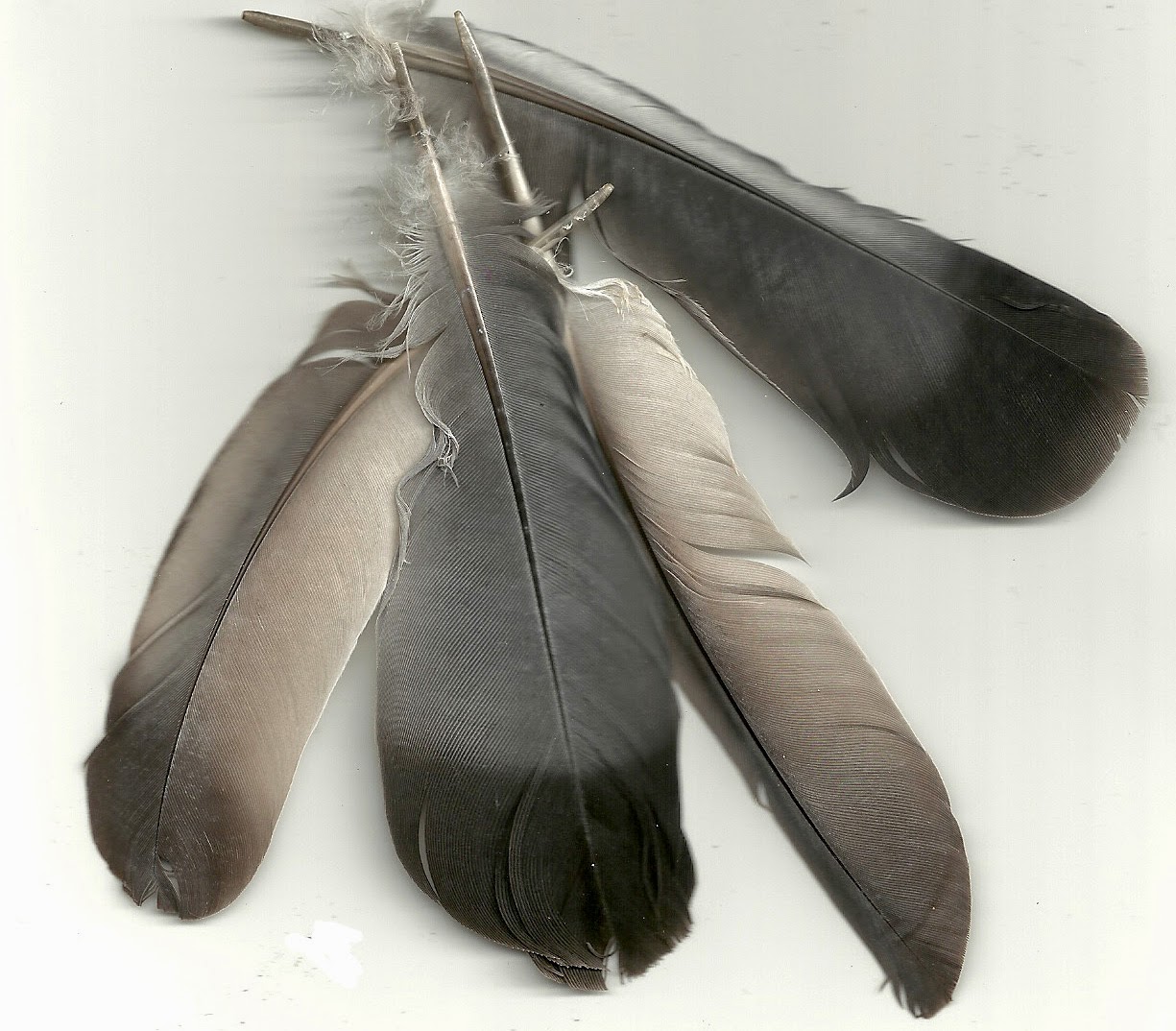 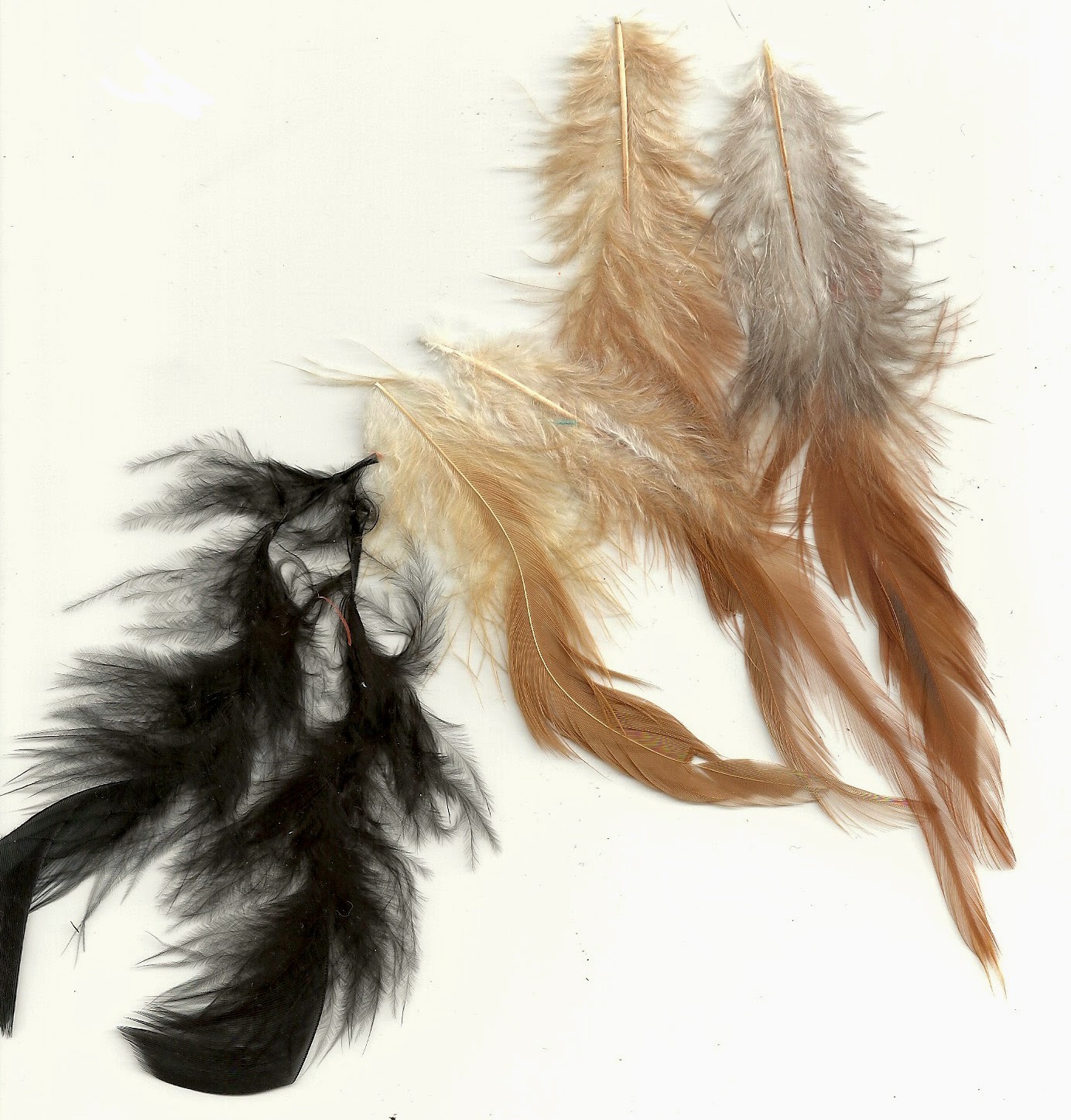 Posted by Margy Norrish at 2:47 PM No comments:

Tartan,  Plaid By Any Other Name

Plaid now refers to a pattern of stripes and checks, but originally, it was a type of Scottish Highland dress.  Scottish kilts, 2 yards wide by 6 yards long, are worn pleated around the wearer.  Plaid also refers to a shawl or mantle worn over the shoulder and fastened with a brooch.  Now we call this type of pattern, Tartan.  Originally, Highlanders called tartan “Breacan” from Gaelic meaning “spotted”.  Some claim the word “tartan is related to the Old French word “Tiritaine”, meaning rough and wooly.  Others say it comes from Gaelic “Taratin” meaning across, which seems more likely. 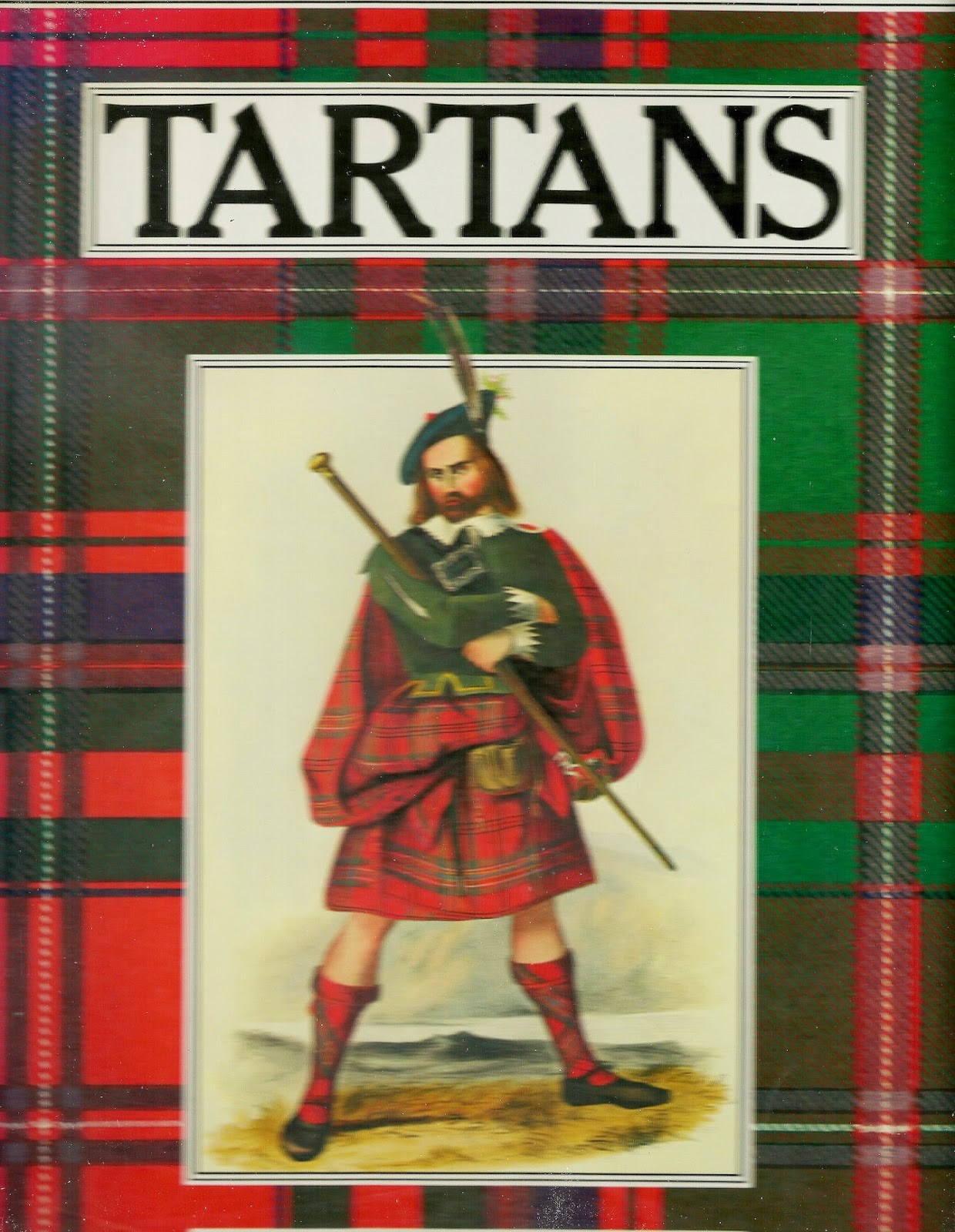 The use of tartan is associated with clan culture.  The pattern and color of the cloth is prescribed by the clan.  The clan could have several tartans, most have 4.  The Chief tartan is reserved for the chief and close relatives, Clan tartans for the other clan members.  The “Hunting” tartan was usually earth colored for everyday use and Dress tartan for formal occasions 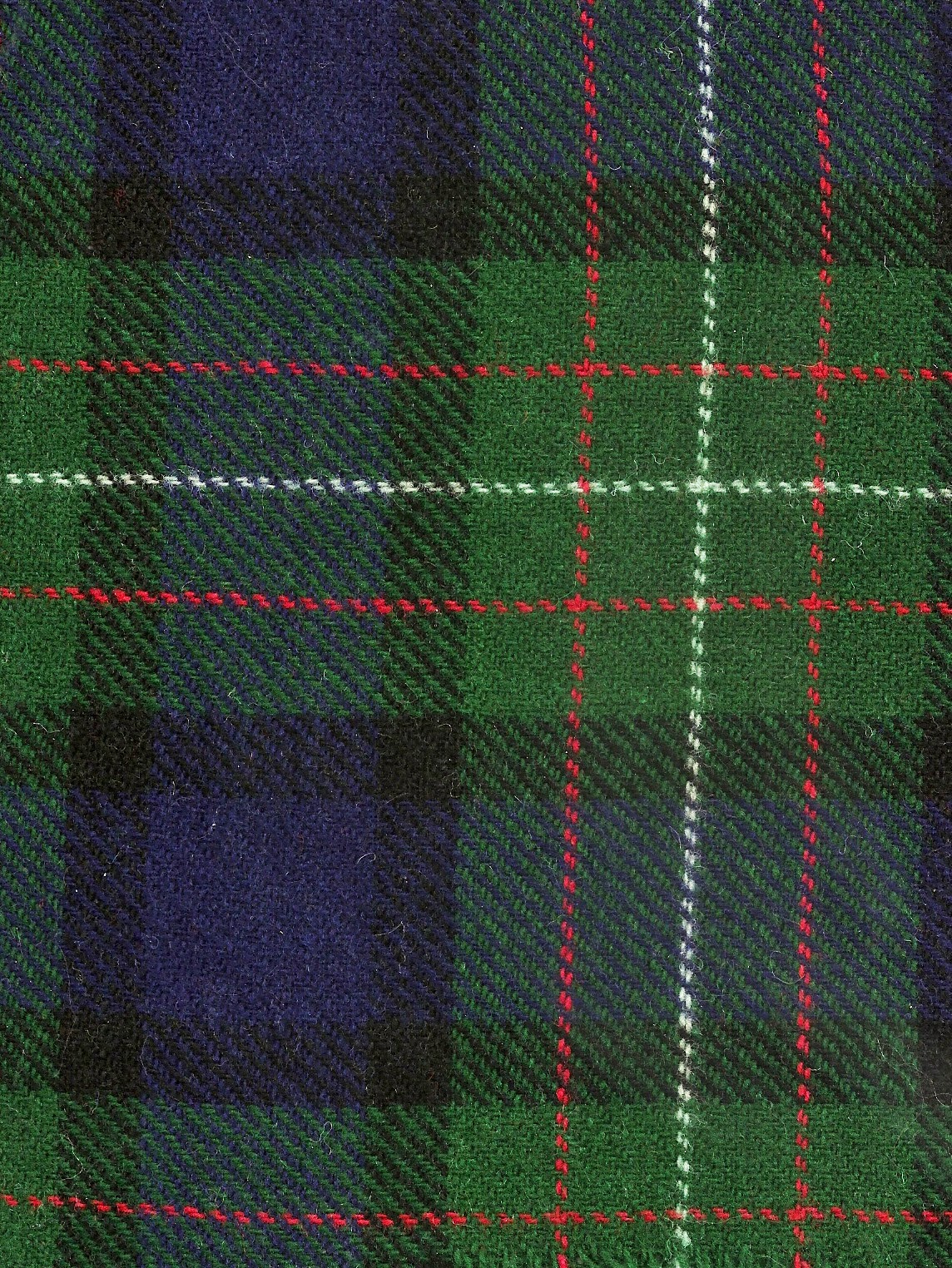 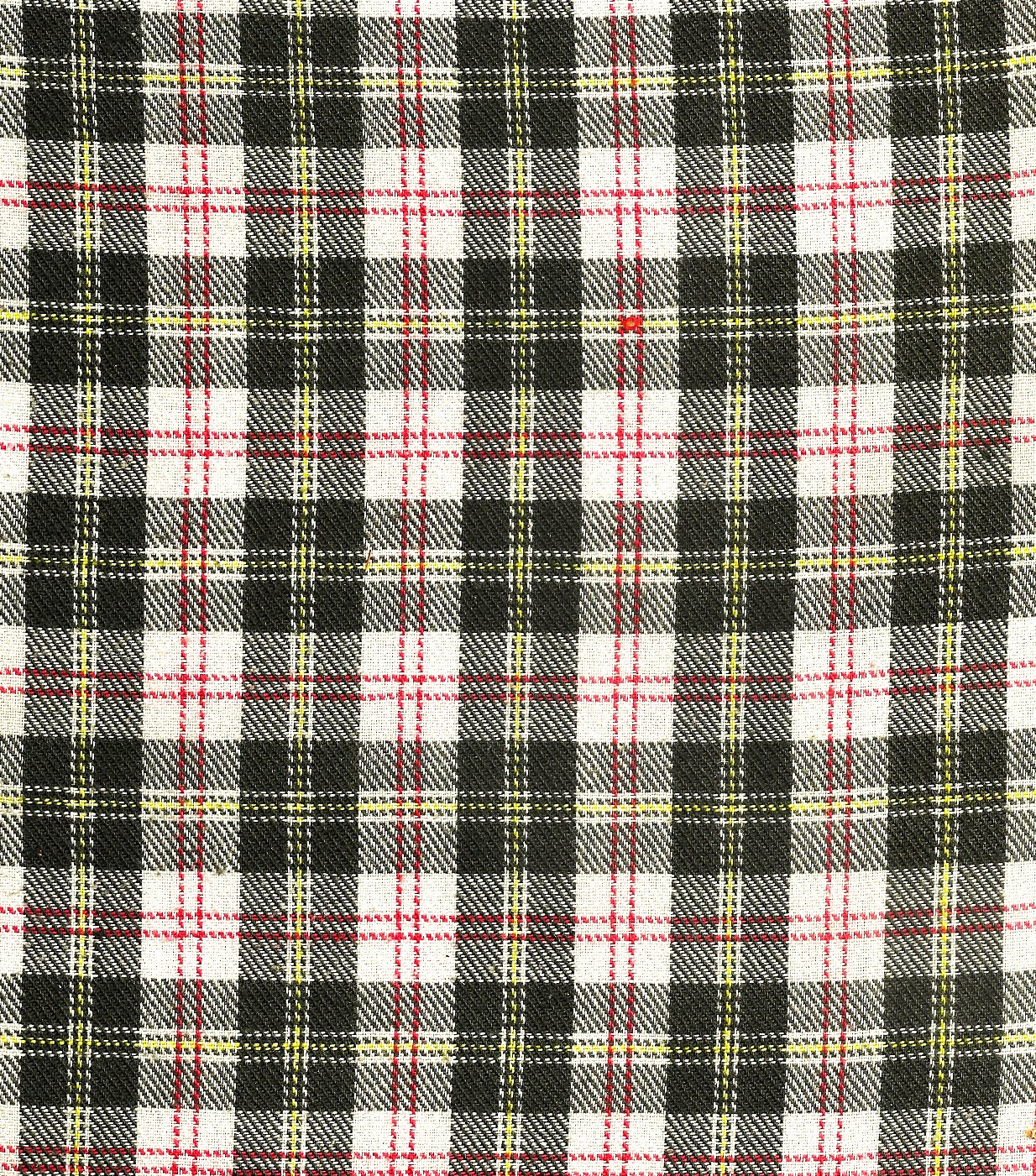 
Tartan is a plain, 2/2 twill weave.  The stripes of colored yarn are in both the warp and the weft.  A tartan can be made is any size, depending upon its use, but the proportions of the widths of the stripes (sett) must always remain the same.

While many ethnic groups have replaced their native dress with western wear it is interesting to see  Scottish clan dress worn , not only for special festivities but often for everyday.  On our many trips to the Highlands we have even seen a lone kilt-wearing Scotsman playing the bagpipe in the median strip of a highway coming from Inverness.

Posted by Margy Norrish at 10:37 AM No comments:

I have a weakness for books.  Our home has floor-to-ceiling bookcases filled with books.  My office has bookcases filled with textile reference books.  I received a question not long ago asking if , in this day of internet information, it  is necessary to acquire texts for a personal library.  My answer is emphatically, “yes”.

Firstly, you must decide what type of library would be of the most use to you, would bring you the most information and the most enjoyment.  If there is a specific type of  textile, a specific time period, or region of the world that is of primary interest to you, then  you have a great starting point.  Today, there are so many publications on the market that cover every aspect of textile design, production, and collection.  These range from beautifully illustrated coffee table type books with stunning photographs to scholarly presentations.

Once you have your starting point do you self a favor and spend time visiting libraries and book stores where you can actually examine the material.  What may sound interesting in a written review may not suit your level of interest.  What I look for are lots of illustrations, preferably in color, a bibliography and index, and a glossary of terms.

Since my field is general textile history from prehistoric textiles to contemporary designs and production methods, nearly any book would fit into my library catalog.  But since I am in the textile minority, having no specialization, you will wish to limit your purchases, but I must warn you, once you begin it may be hard to stop.  Another good resource is the library at your local museum (not necessarily just their bookstore) as curators and staff may have good recommendations for you..

Sources are obvious: bookstores and the internet.  The internet will provide sales information on all ranges , and prices from current editions to those which may be out of print.  Do not overlook second-hand bookstores or thrift shops, flea markets and garage sales.  Often older books contain a wealth of information, although some information, not well researched may be misleading.  Nevertheless they are often a delight to read.

To answer my reader’s question, there is no substitute for seeing actual textiles.  Museum collections, galleries and such are good.  The best would be access to actual textiles for you to examine.  One way is to become a member of a museum’s textile  group, join a textile related guild,  become a docent or take a course at  your local college.  While the internet may offer information, many sources are redundant, but they can provide you with a starting point for further research.  Books, however, are there when you wish to investigate a topic or spend time analyzing textile properties, such as design (which is why it is important to have a volume that has as many good quality photographs and illustrations as possible).  While I have my tried-and-true reference volumes which are constantly used, I often will select a book from the back  shelf which I haven’t really examined in some time.  I never have spent any length of time browsing through these editions without learning something I have not considered.

So, fellow enthusiasts, there is unlimited resources available and as your reference collection grows, I am sure your textile collection will do so also.
Posted by Margy Norrish at 2:26 PM No comments:

There is some confusion over these two embroidery styles.  It is not just the obvious difference of the colored thread.

Let us start with Blackwork.  Traditionally blackwork was black silk thread used to embroider mosaic designs onto white linen.  Some early writers attributed the introduction of this embroidery to Catherine of Aragon and was called “Spanish work”. It reached the height of popularity in England in the 16thC and early 17thC.  Actually, it was known in England before Catherine arrived in 1501. However, they were correct associating it with Spain and the Moorish invasions from northern Africa.  Historically, the Moors settled in  the south of Spain in 711 CE and introduced their geometric motifs simply outlined in black on a white ground.  These Arabesque designs were adapted by the Spanish , and later other European countries.
The stitches employed were back stitch, braid stitch, buttonhole, coral, double-running seeding or speckling stitches.  Often it was highlighted with silver metallic thread.  When first introduced Spanish work was used in edge treatments for collars an cuffs, and delicate in quality.  As fashions changed, the work became more elaborate and embellished larger areas of dress.  The motifs also changed from the geometric to flowing floral and imaginary bestial designs.  Even simple designs became more intense by using filling stitches. 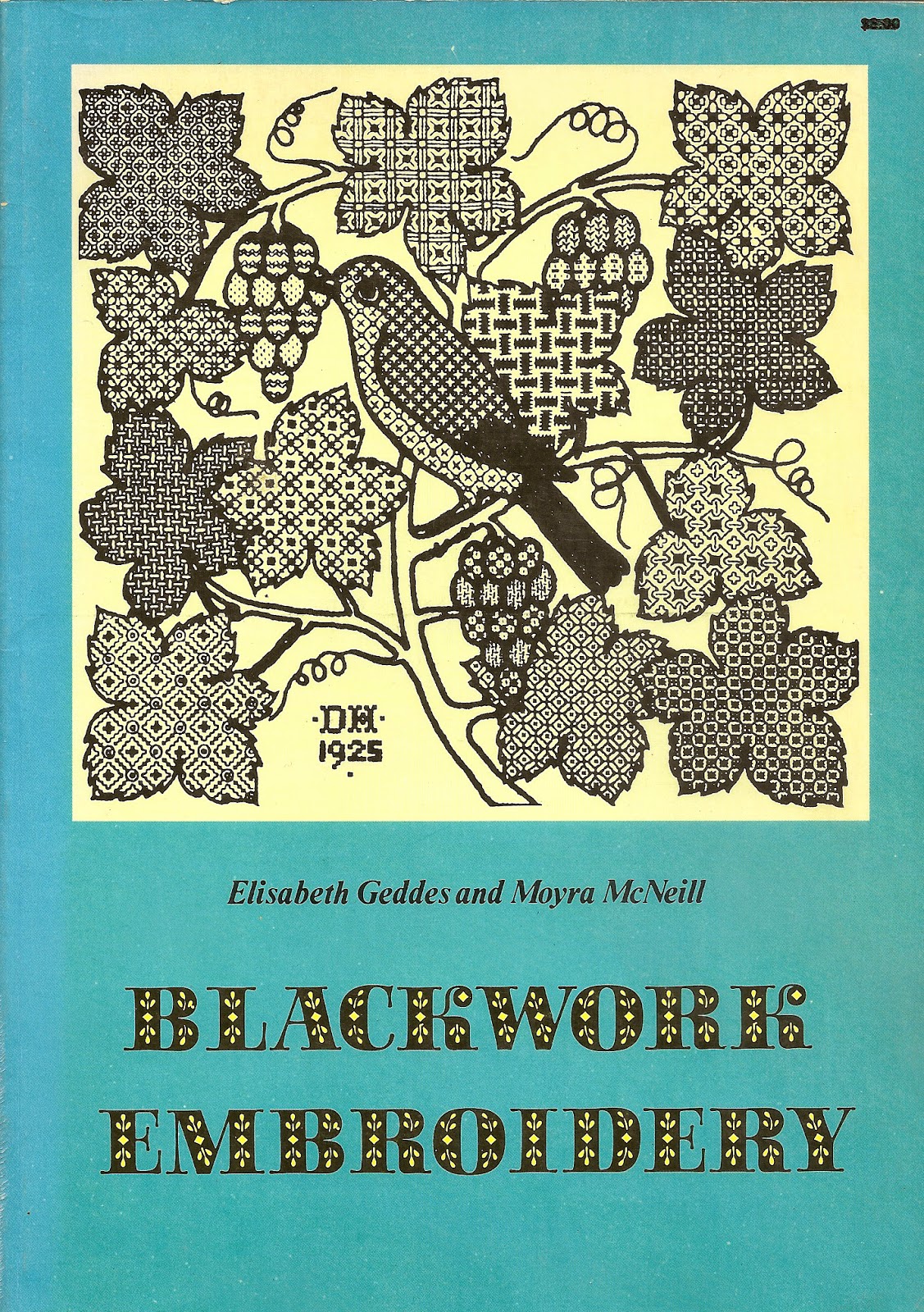 Redwork is a late relative in the embroidery family.  It became popular in the mid 1800’s when embroidery threads became available in Turkey Red.  Turkey Red is an old dye produced in the Near East, the recipe a closely guarded secret.  The “magic” of Turkey Red was it’s brilliant true red hue. Other red dyes, cochineal and madders produced orangey or brownish reds.   Turkey Red was also fade resistant and vintage textiles that were dyed with this red are still vibrant.  Redwork embroidery is the outlining of designs using backstitch or stem stitch. The patterns were taken from magazine illustrations, later commercial patterns could be purchased by mail. 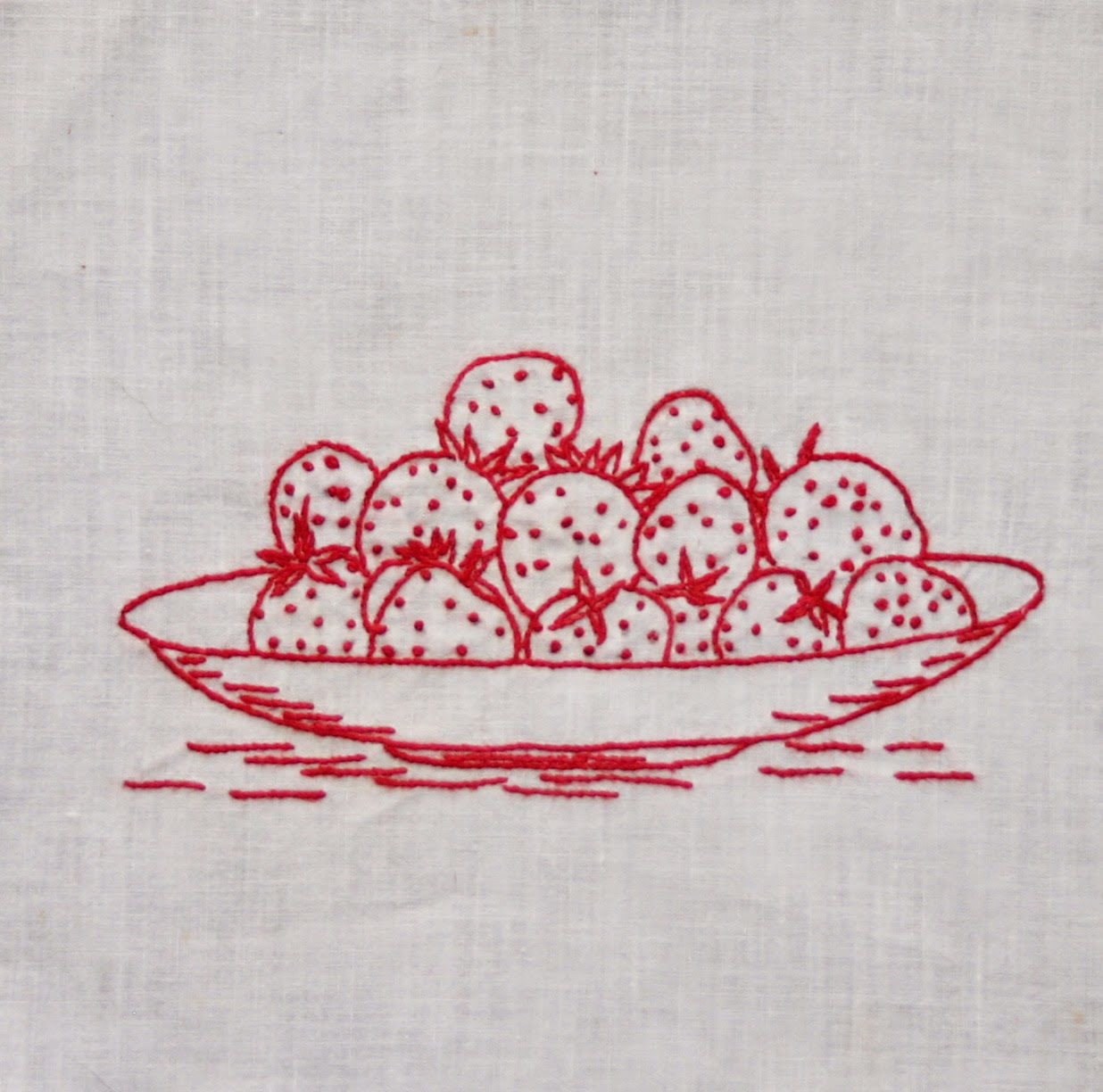 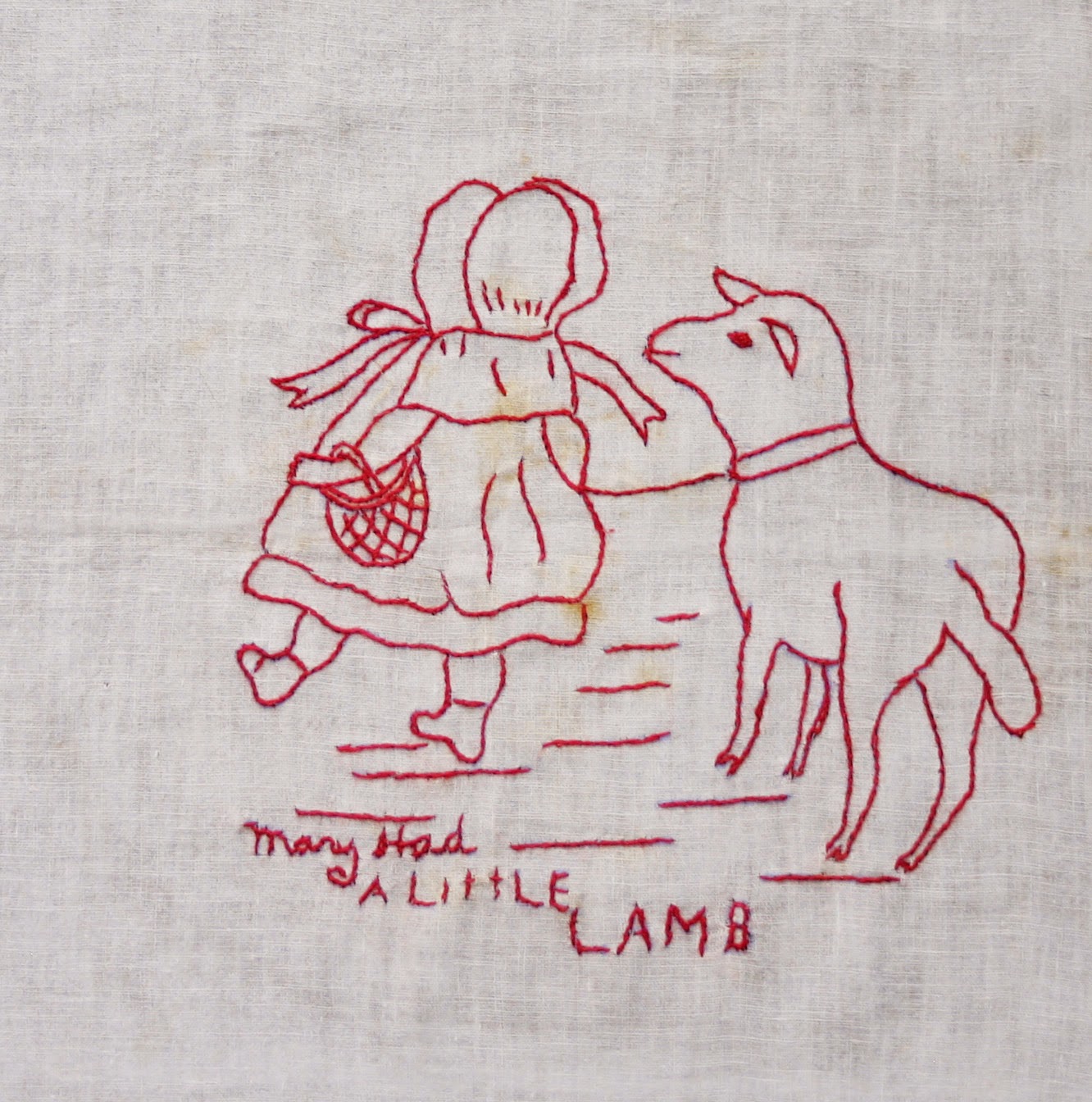 Less often dark blue thread was used, perhaps inspired by the blue and white china ware of the East or the blue and  white rural Chinese embroideries.

By the end of WWI other piecework replaced this embroidery style, but as is often the case it enjoyed a revival in the 1970’s.  Most stores that sell sewing , knitting and embroidery supplies also sell “kits” with iron-on transfer designs. 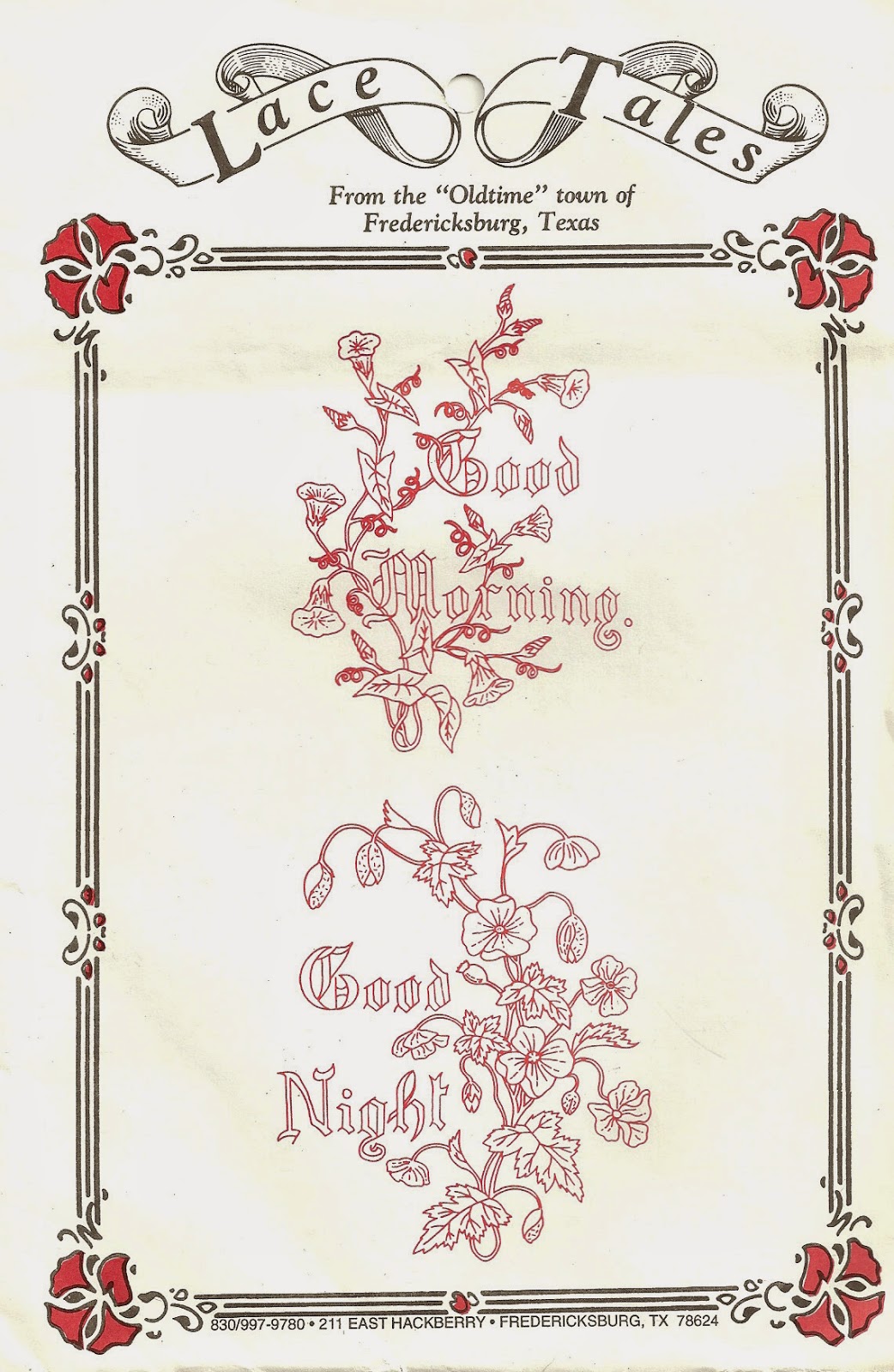 This transfer is intended for pillow shams 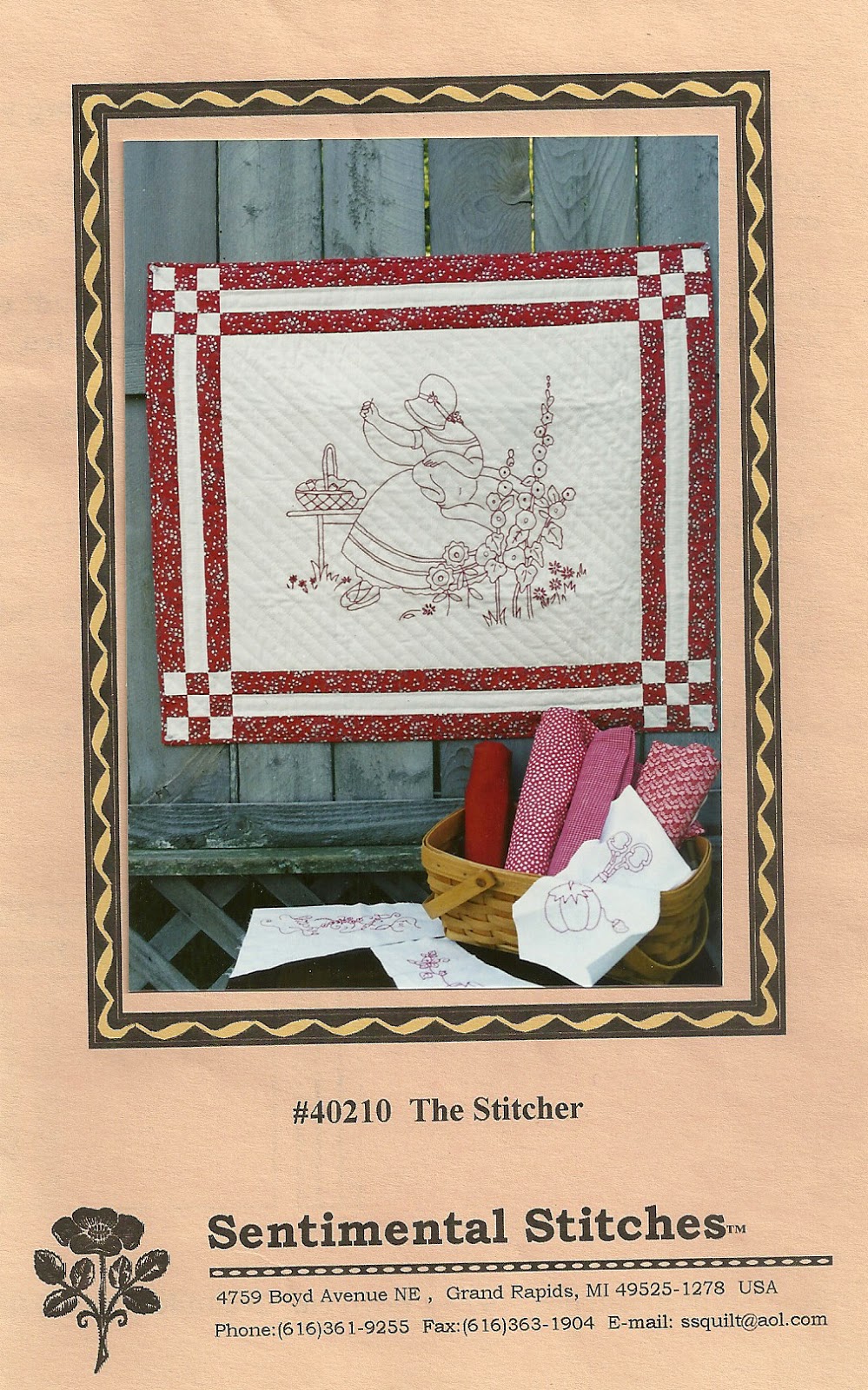