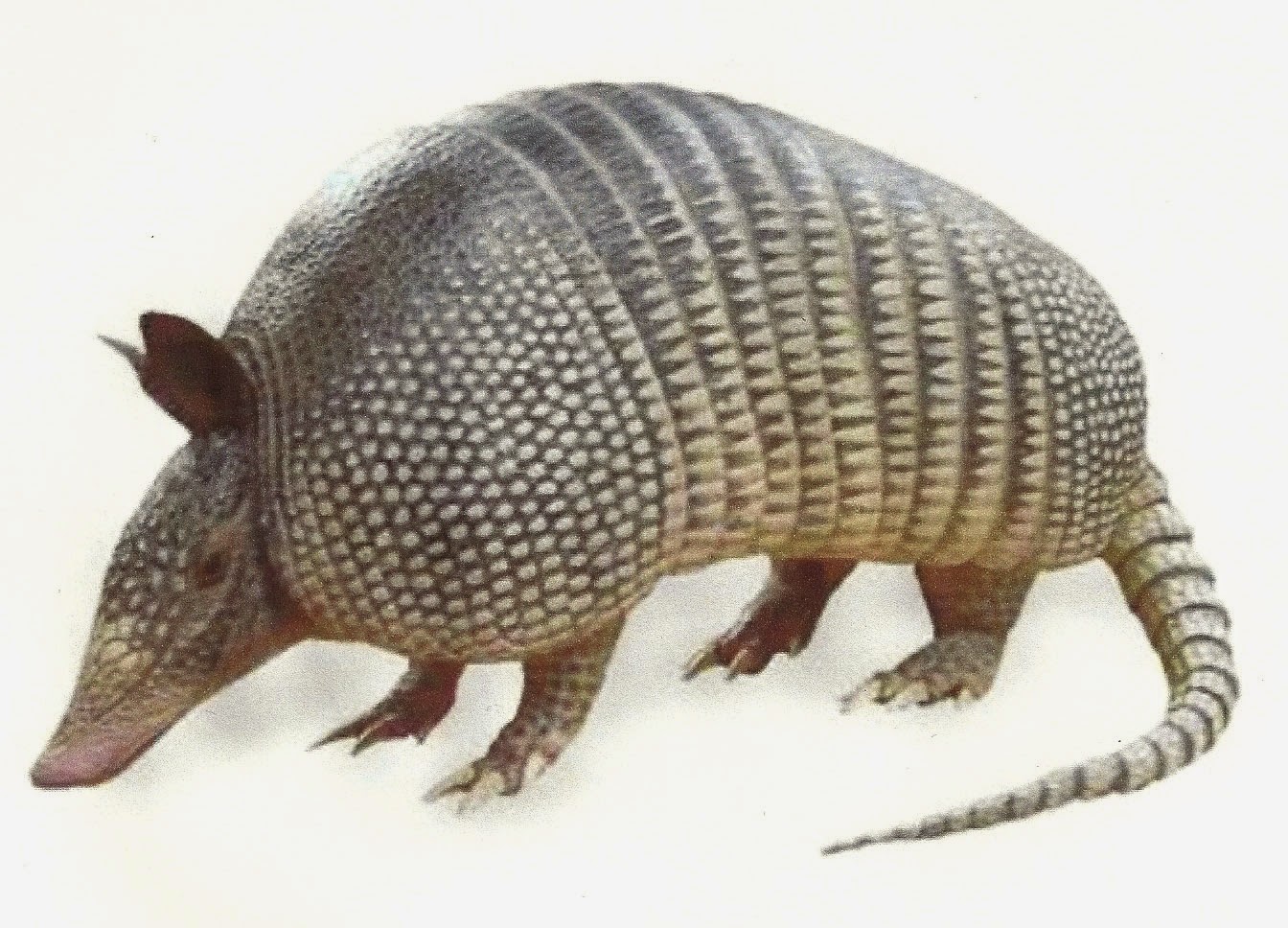 If you’re not from these parts, you may not recognize this animal.  It is an armadillo, a toothless, burrowing animal of the southern US, Central and South America.  Its distinguishing feature is an armor-like covering of bony plates, even on his skinny tail.
So today we are not talking about zoology but about armor, covering worn to protect the body, more specifically, for protection from weapons.

Early man, from the Aleutians to the Andes, wore heavy, leather tunics, leggings and head coverings and carried shields cover in hide.  According to Anawalt (The Worldwide History of Dress), Eskimo men wore “armor” consisting of” a series of lower-body hoops made of double sealskin…the head and neck were protected by a large wooden shield covered in sealskin”.  There is also evidence that Eskimos of the Bering Sea area wore plates of walrus teeth (The Basel Museum).

The Pacific coastal people, Tlinglit and Tsimshian, wore tunics of  multiple layers of hide. They further protected their bodies with garments made of wooden rods or wrapped rope around them for protection. For protection of the head and neck some wore heavy wooden face masks.

The Plains Indians carried large shields made from buffalo hide.  Some native tribes wore basketry for armor or layers of deerskin.

Evidence of armor-wearing warriors c.3500BCE was found in Ur (southern Iraq) which was the capital of Mesopotamia.  Excavation of a rubbish dump revealed a royal burial plot.  Amongst the findings was a decayed mosaic, The Standard of Ur.  According to the British Museum it was fashioned from shells, lapis and limestone and consisted (as found) of two main panels known as “war” and “peace”.  On the “war” panel are three horizontal sections depicting Sumarian warriors in battle.  The warriors on foot wore short skirts, covered with a leather cloak with metal studs
and a fitted leather cap.

The peoples of Oceania (Sulawesi, New Guinea and the Gilbert Islands and others) wore wicker helmets and cuirasses (a piece of close fitting armor, protecting the neck and back).  This one-piece body armor was made of coiled bundles of coir (coconut fiber) or rattan held together with fine bast cording.  Beneath the cuirass was worn a shirt, cap and gloves of coir twine. 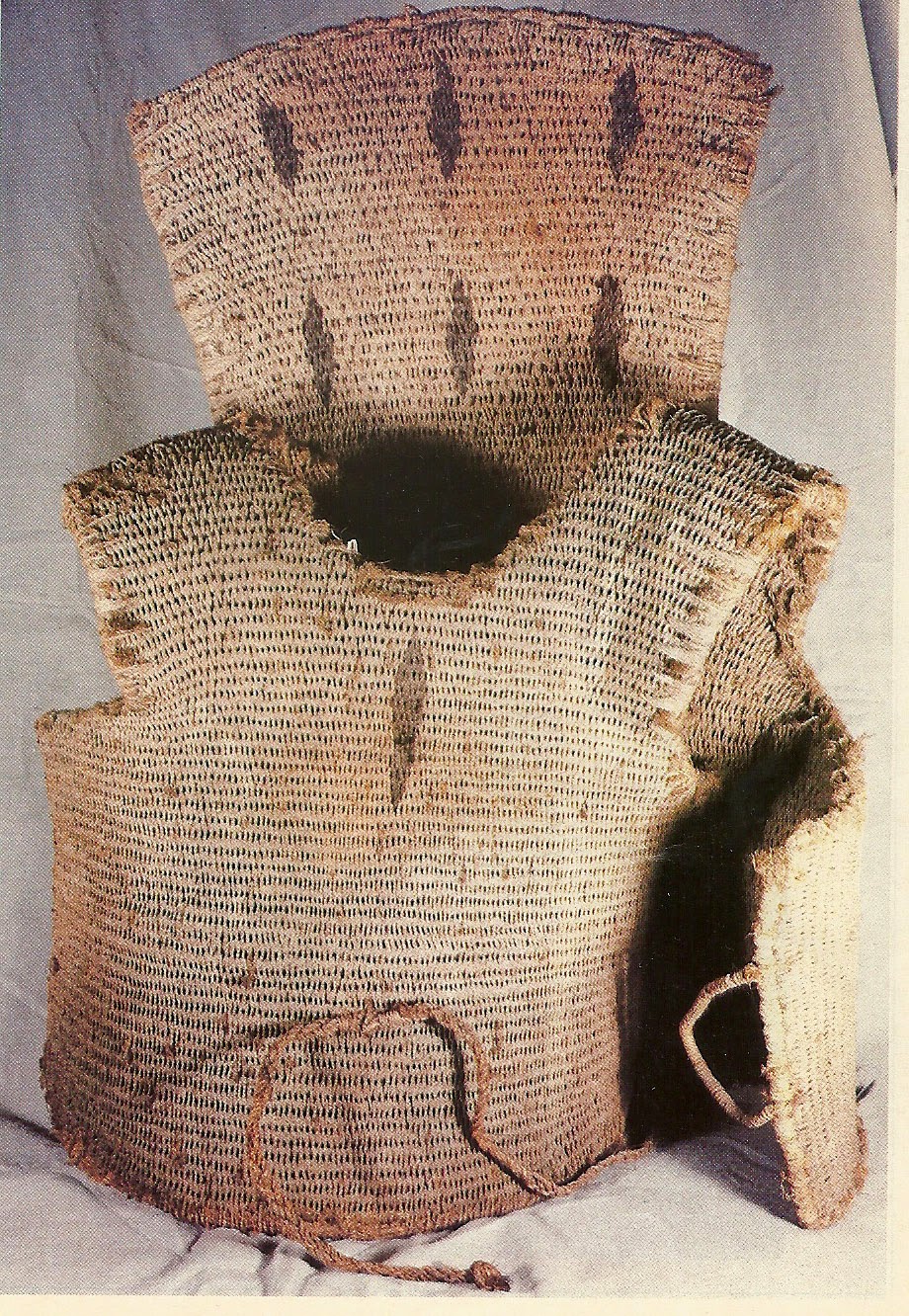 Next time we will examine the contribution of metallurgy and the construction of plate armor.

Posted by Margy Norrish at 8:24 AM No comments:

“Over the River and Through the Wood to Grandmother’s House We Go”
The New England Boy’s Song About Thanksgiving Day
Lyrics by Lydia Maria Child, 1844 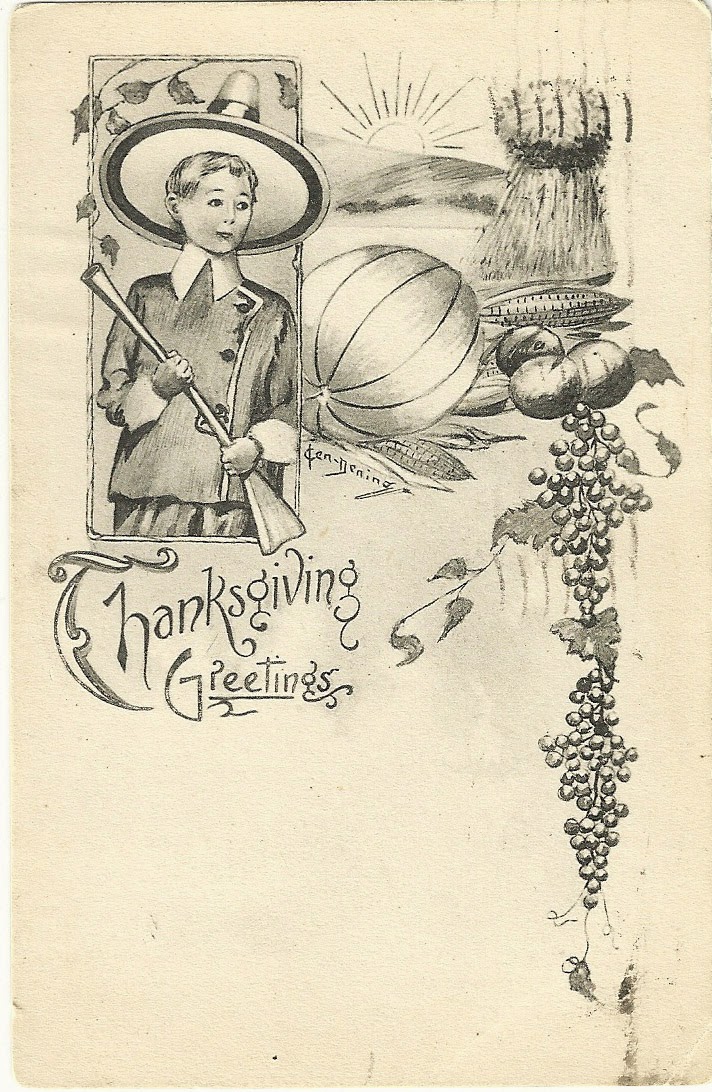 This is supposedly the busiest travel time in the US, but few of us will be relying on transport by a horse-drawn sleigh through the snow.  Snow, we have.  The so-called polar vortex has frozen the country and dumped feet of early snow.  Most travelers will rely upon cars, buses, trains and planes.  This holiday is known for food, family/friends and football, as well as being the traditional start of the Christmas holiday season.  I remember, as a child, the department stores didn’t display Christmas decorations until after Thanksgiving, after all Santa didn’t arrived at Macy’s until the Thanksgiving Day parade.  Nowadays the boughs are hung in big box stores in late summer and the gift catalogs arrive in October.

I have been consoled by many TV and media ads which feature the true meaning of this holiday, that of giving thanks.  It shouldn’t take a special day set aside for this activity, actually we all should set aside a minute or two each day to express our gratitude or perform a simple act of kindness, or be thoughtful and polite. 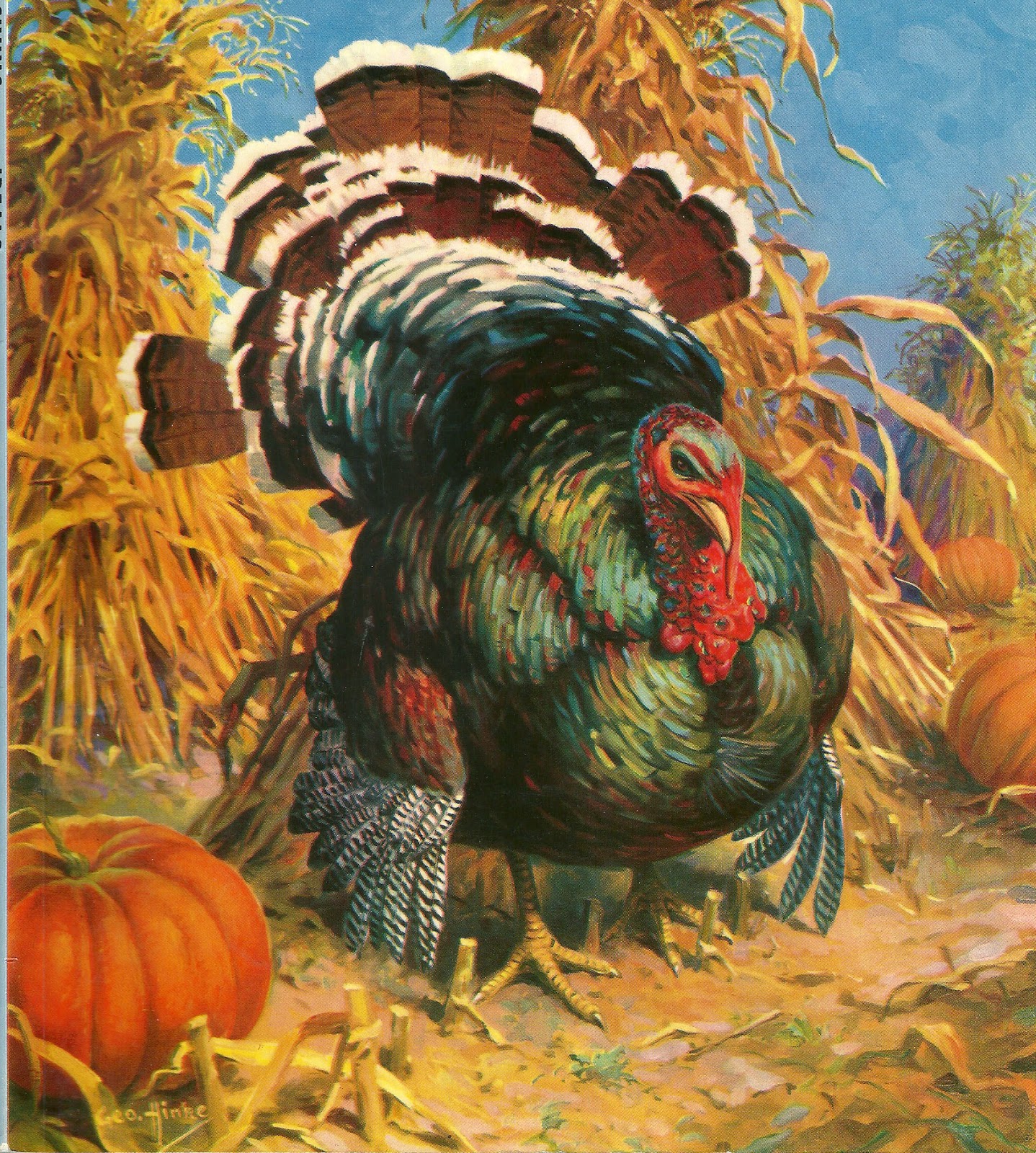 Gobble, Gobble
Posted by Margy Norrish at 8:24 AM No comments:

Traditional Japanese clothing is most associated with the wearing of “Kosode”, a geometrical t-shaped garment comprised of two rectangular fabrics draped over the shoulders with seams at the back and each side.  Today, we know this garment as “Kimono”..  Kimono is a relatively modern term for this centuries old garment worn by both men and women.  In the late 1800s there was great western influence in Asia and with the defeat of the Russians in 1904 (Russo-Japanese War) Japan became recognized as a civilized non-European power and western clothing (white shirts, suits and ties) were adopted by Japanese business men.  Simultaneously, western women adopted the beautiful silken robes, kosode.  It was at this time that the traditional garment was renamed “kimono”

The traditional kimono began to blend contemporary elements of color and design in the Meiji (1868-1912). This evolution progressed to include modern fabric production, synthetic colors and art designs that included current events.

In September, as part of the Textile Society of America’s biennial symposium, I visited LACMA, the Los Angeles County Museum of Art and viewed a very impressive exhibition, Kimono for a Modern Age.  Curated by Sharon Takeda, the exhibition featured over 30 modern garments from the LACMA collection.  The modern kimonos were visually startling with vibrant colors and a variety of patterning techniques.  There was also the use of modern synthetic fabrics and contemporary themes such as space exploration and abstract art.

These photos illustrate the wide range of modern influences upon a most traditional garment. 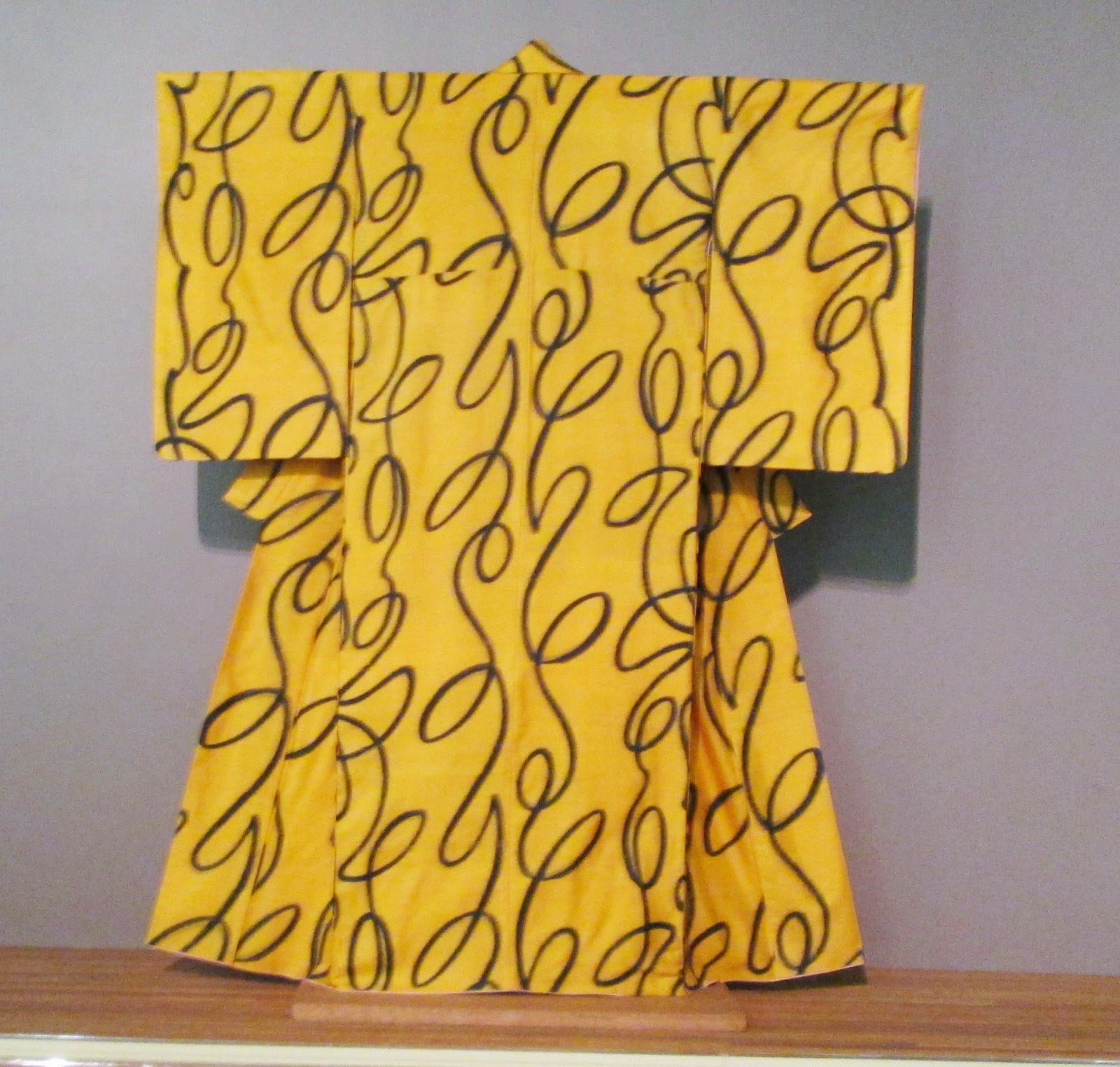 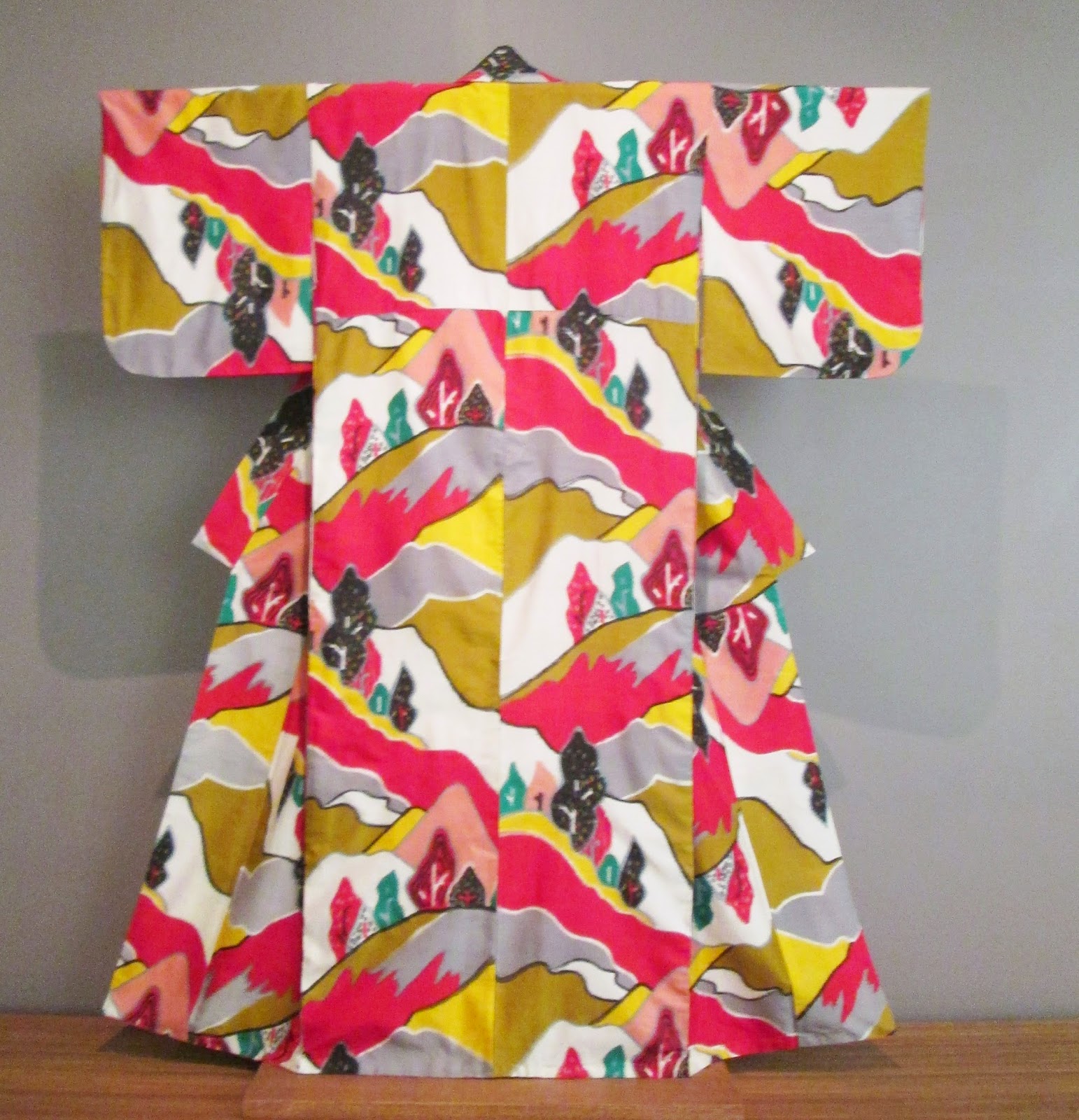 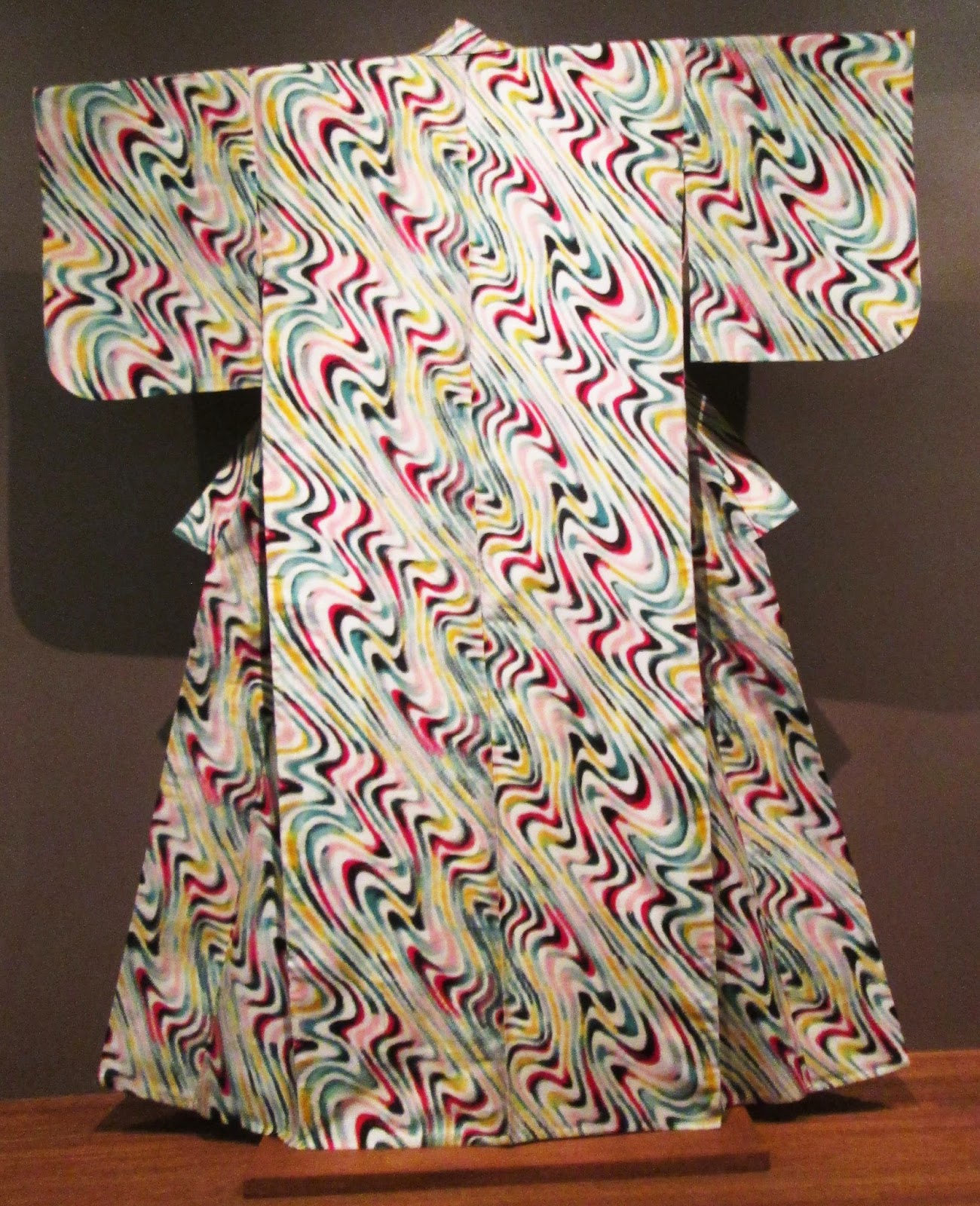 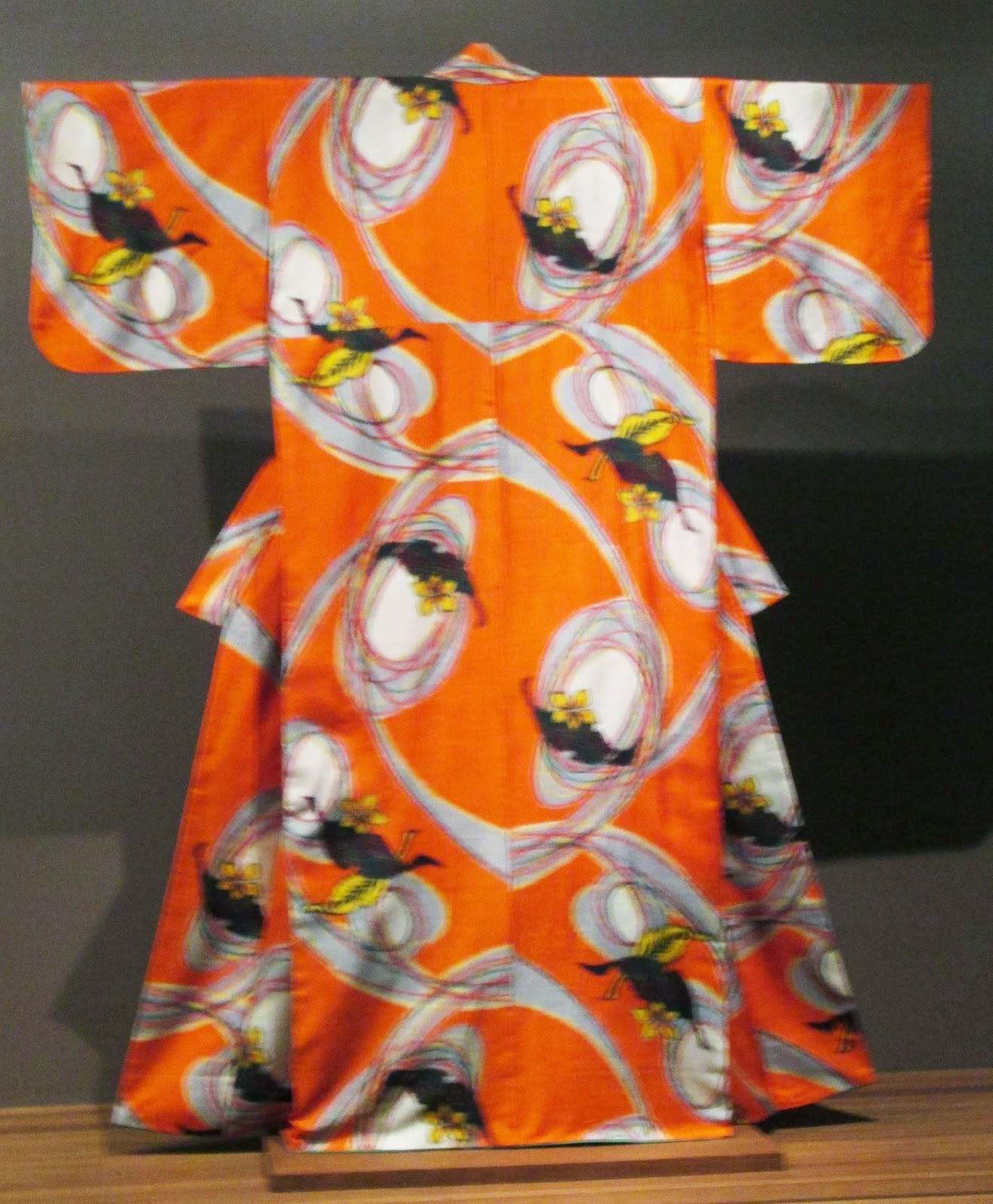 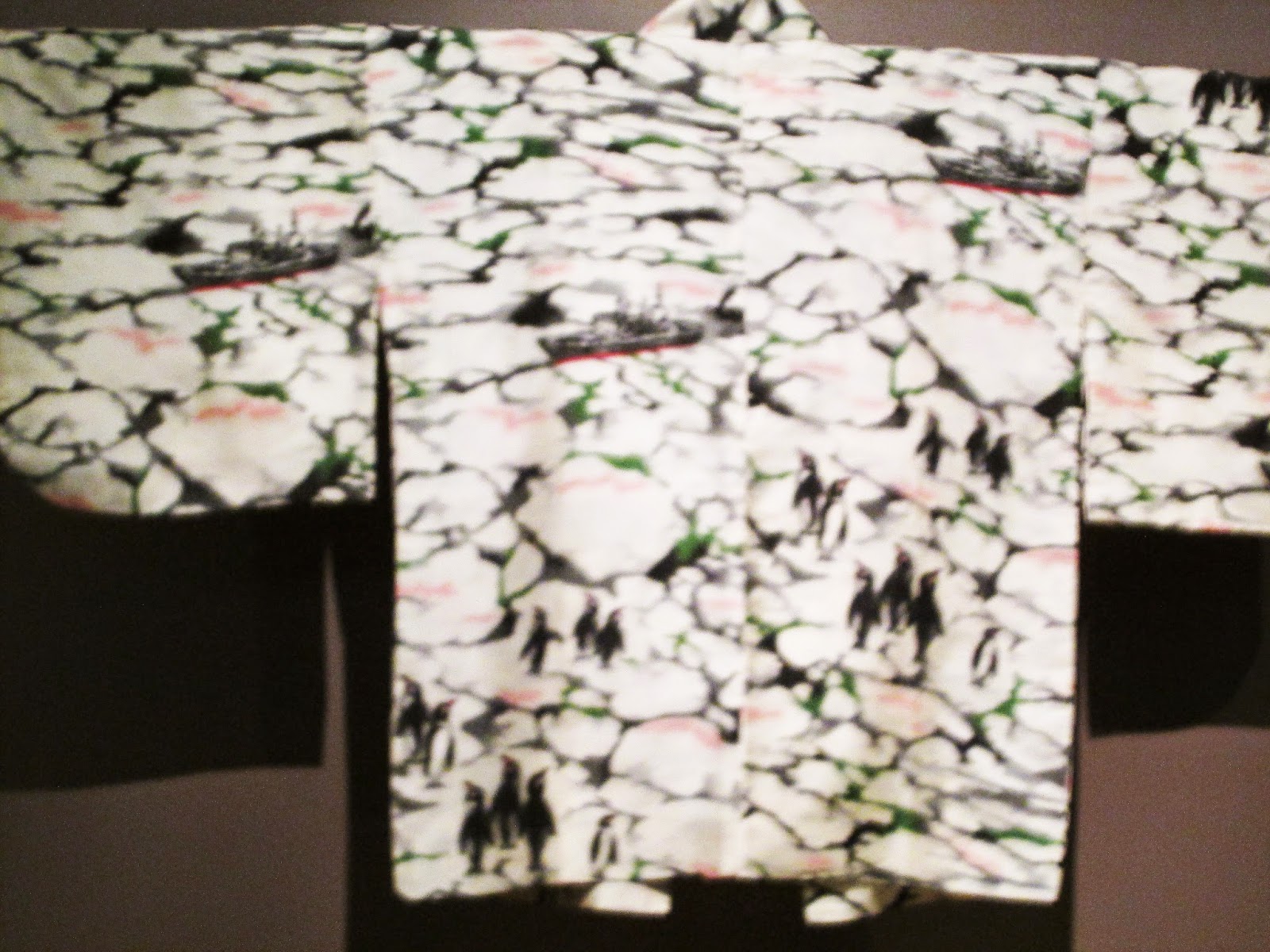 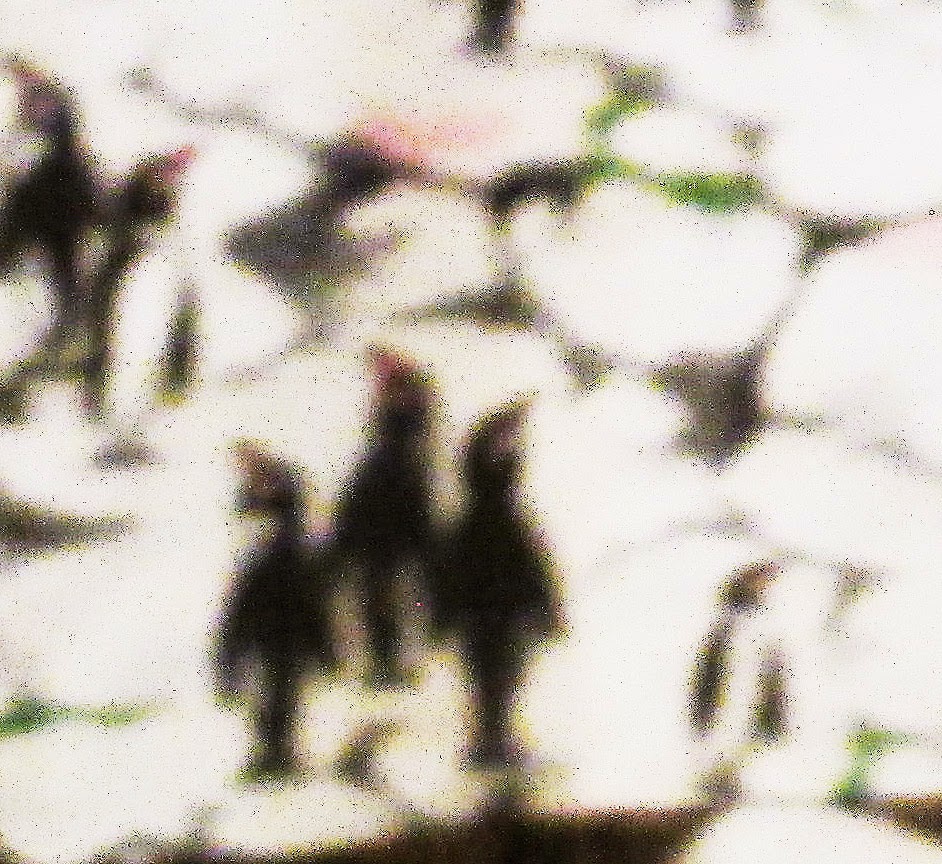 This child's garment featured ice breakers and penguins.
Posted by Margy Norrish at 12:19 PM No comments:

Last week I spoke to the talents of fashion designer Oscar de la Renta.  We are familiar with those who create “the look” but often we forget that there is another group of designers vital to the creation of fabric, be it for clothing, home furnishings or accessories, even industrial applications.  These are the designers that create the fabric patterning.

Today computerization has taken many tasks that were previously laboriously performed in the textile industry.  While design studios rely heavily upon computer programs, there is, or should always be space for designers to paint, sketch and imprint their artist’s hand in the design.

I recently purchased an amazing reference, The Collier- Campbell Archive.  This beautiful volume tells the story of two sisters, Sarah Campbell and Susan Collier and their 50 year career in fabric design. 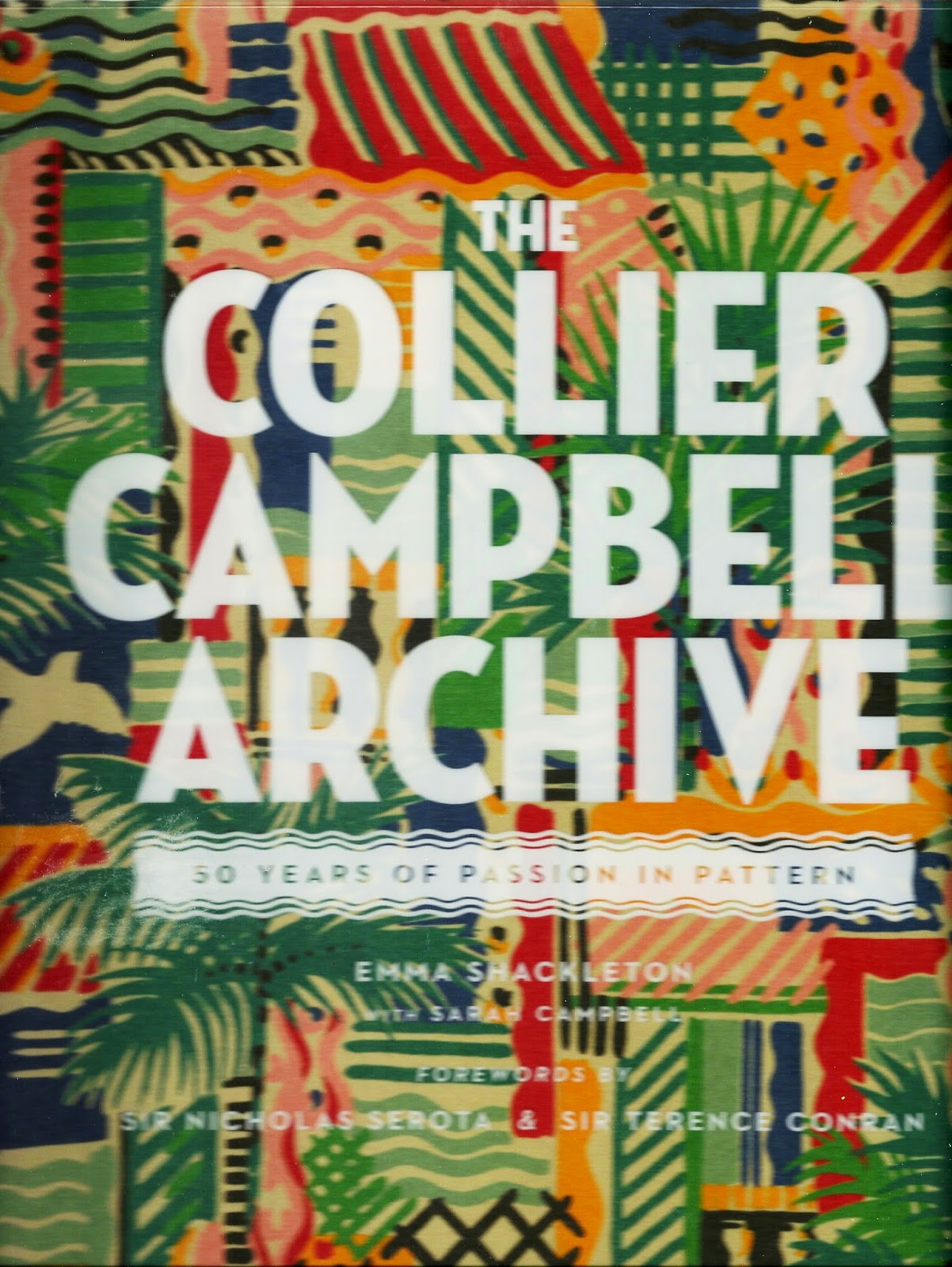 Their career began designing for collections for Liberty, David Hayward and Jack Prince, and became design and color consultants for other design studios.  In the late 1970’s the sisters founded Collier and Campbell in order to control their design rights and the quality of the fabric and printing.

Their story is told in three parts:  The Collier-Campbell Story (their history), The Creative Process (their methods and themes) and The Gallery (their designs and patterns).

The color plates throughout are stunning and offer inspiration for any student of design, artist or textile lover.

If you get the opportunity to peruse this collection you will understand my enthusiasm.
Posted by Margy Norrish at 1:40 PM No comments: