I recently read an article by Karen LeBat writing for The Berg Fashion Library entitled “Bicycle Clothing”.  This caught my eye since my husband is an avid cyclist.  Here in Santa Fe cycling is very popular as the weather is generally conducive to the sport throughout the year.

I actually found a print by Rudolph Ackermann (1819) of women astride English bicycles with drop seats allowing female riders to wear their long skirts.  Ackermann was a London print maker and businessman who established The Print and Picture Emporium at 101 Strand, London.  Coincidentally, Ackermann also dabbled  as an inventor and patented mechanisms for carriages.  He also obtained patents for various bicycle components, although it is not clear that he actually invented these components or merely bought the patent rights.

By the late 1800’s women’s fashions introduced knickerbockers also known as “bloomers” named after Amelia Jenks Bloomer an American reformer.  “Bloomers” were loose, boxy trousers, gathered at the ankle or knee and worn by women and girls for participation in athletics.

According to LeBat, in the early 1920’s, only the professional cyclists wore specialized clothing and the average cyclist wore popular casual clothing.  Today there is a large textile industry dedicated to sports clothing, utilizing the most advanced fibers and garment designs. Cyclists, both men and women, now wear body-fitting shorts and shirts in vibrant colors to increase their visibility.  Also necessary are gloves to facilitate grip and glasses to protect from the wind and sun.  But one of the most important accessories is the helmet, aerodynamically shaped.  Many states require bikers to wear helmets, and I cringe whenever I see riders without them, 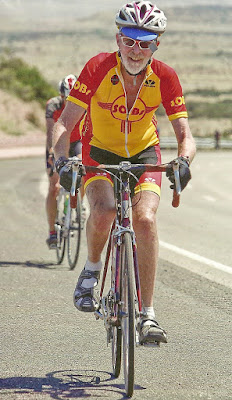 Posted by Margy Norrish at 1:07 PM No comments:

This week we celebrate the harvest and a day of thanks which entails journeys to the homes of relatives, near and far.  Tradition mandates large dining room tables laden with turkeys the size of ostriches and several side dishes followed by desserts laden with calories. 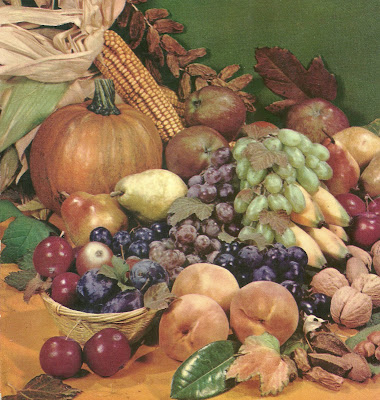 But that is not the meaning of Thanksgiving.  We have much to be grateful for and should not require a special day to show our appreciation for friends and family.  We must also not ignore those less fortunate but strive every day to share our bounty with others. 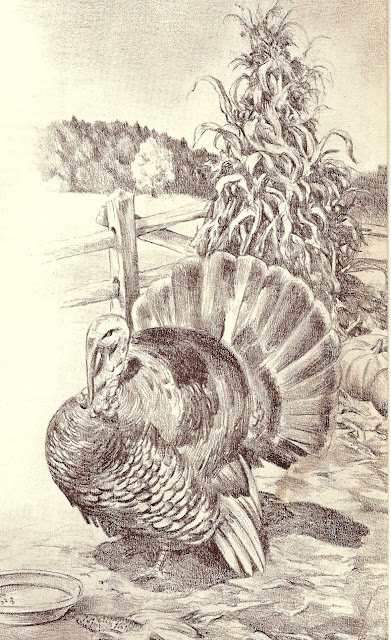 Pina –Fiber of the Philippines

Imagine making a luxurious, diaphanous cloth from a pineapple.  The fiber is a leaf fiber from the red pineapple.  The long fibers cannot be spun but are hand knotted to form the warp and weft yarns.  The plain weave yardage is produced on upright looms in small workshops.

Pineapple is an herbaceous perennial, 2 ½ to 5 feet in height with a spread of 3-4 feet.  The plant is native to Brazil and Paraguay.  The South American Indians spread the plant throughout the rest of South and Central America where Columbus discovered the fruit on the island of Guadeloupe in 1493 and brought it back to Spain.  In the 16th C Spain introduced the plant into the Philippine Islands.. 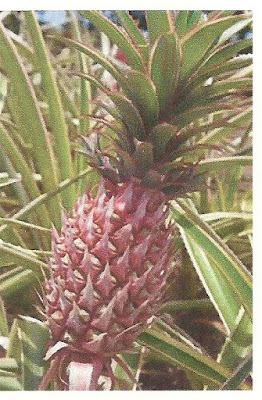 Sheer pina cloth was a perfect ground for intricate embroidery techniques taught by Spanish nuns.  During the late 18thC and early 19thC there was a high demand for  intricate lace-like textiles, however by the 1850’s the labor intensive production was too costly.  There was competition from factory- produced goods and the cottage industry faltered.

In the 1990’s there was a renewed interested in this textile by fashion designers working with the government.  Some innovations in manufacture included using native and synthetic dyes to produce a variety of colors.  Combining the pina fibers with other plant fibers created cloth more sturdy and easier to weave.  Combined with abaca, another fiber long used in the region, the cloth is called “justi”.  Combining pina with silk warp threads produces a cloth called pina-seda.

The holidays are rapidly approaching.  Have you finished your holiday shopping?

Actually, I quite like shopping, whether for the holiday season, or just a leisure activity.

The process of consumer buying has changed drastically over time.  Initially, people grew their own food, made their own clothes and were generally independent.  What goods and services they could not provide for the family were obtained through trade and barter.  As populations formed small towns and villages, a merchant class was born.  Each town had a “high street” where small shops sold their products.  Green grocers, drapers, pharmacies lined the streets and shoppers (usually women) could purchase their goods, socialize, and stop for a cup of tea.

Larger cities, too, had multiple specialty shops selling home goods, clothing, foodstuffs.   Usually these shops tended to be in proximity so that buyers could go from shop to shop with ease.

In the mid 1800’s a new establishment was born: the Department Store.  Actually, this was a collection of small retail shops under one roof, not the mega store we think of today.  In some countries, especially in Asia this is still the case.  Each shop within the building may be privately owned but for the convenience of the public they are in one location, much like our indoor malls.

The first department store, The Bon Marche was opened in Paris in 1852.  Of course such stores were soon to be found in other large European cities. The sheer size of the building, the enormous selection of items for sale and the lavish décor made this shopping experience hugely successful.  While the women in small towns could enjoy a few hours on the “high street”, the shoppers in large cities could spend an entire day.  The store provided amenities such as “refresh rooms”, cafes, fashion shows.  Public transportation was available for the surrounding suburban neighborhoods.  Another important feature of these businesses was the freedom to “window shop”.  That is, see the items for sale, and actually, in some cases touch and inspect them.  Prior custom was counter service where a staff employee would assist the customer.  There was an underlying obligation to actually buy what was presented.

Popular department stores became landmarks for their cities, for instance Harrod’s, the largest such shop in the UK, and Macy’s (originally R.H. Macy & Co.) The flagship store on Herald Square in NYC has over 1.1million sq. feet of retail space.

The pleasure factor of such a shopping experience has been dramatized in such productions as The Paradise, a BBC & Masterrpiece adaptation of Emile Zola’s work “Au Bonheur des Dames” set in NE England (not in original Paris) and Mr. Selfridge.  Harry Selfridge founded Selfridges on Oxford Street, London in 1909.

These large establishments have remained for today’s shoppers (and tourists).  While in Berlin this spring, my husband and I visited  Ka De We, reportedly the largest department store in the world.  It was truly magnificent.

Many department stores were faced with the emigration of families to the suburbs, where once again small, independent stores formed “strip malls”.  The evolution of the Mall became large indoor areas of individual shops, with large parking lots.  Amenities include restaurants, cinemas, travel agencies and banking and beauty salons.  Many also include large grocery stores so that it is truly a one-stop shopping experience.

However, this retail evolution is not yet complete. A vast amount of “retail therapy” is now done on-line.  The ease of internet shopping and the vast array of merchandise available has become a boon for the busy household.  Sit by your computer in your robe and slippers, peruse the many, many sites, make your selection, pay on-line and have your purchases delivered to your door, frequently with free delivery, from anywhere in the world.
Posted by Margy Norrish at 12:47 PM No comments:

Hand fans have been a fashion accessory for centuries.  We have all seen images of servants holding large tropical leaves by the stem to cool the air around their master (and probably keep flying insects at bay). 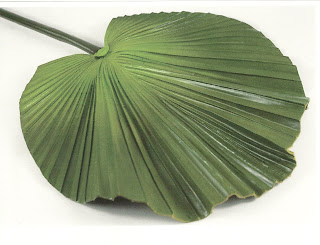 An Egyptian fan was found in a tomb and was constructed from peacock feathers and a gold handle.

Fans can be classified as Fixed (rigid and flat)
Folding
Oriental Brise (these fans have no leaves and are comprised of overlapping sticks, narrow at their bottom and held together by a rivet) 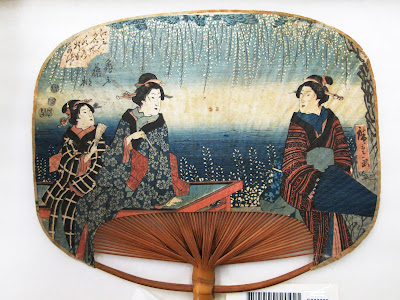 The anatomy of a folding fan  : 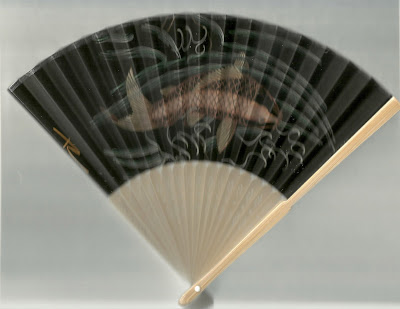 Folding fans came from Japan as early as the 6th-9th C.  Fans came to Europe in the 1500’s.  It is said Catherine de Medici introduced the folding fan (from Italy) into France.  France then became the center of fan manufacturing and export for Europe from the 15thC through the early 20thC.

England soon followed France in production, although England never realized the status of  France.    In 1709 The Worshipful Company of Fan Manufacturers was established in England.  The manufacture of the folding fan was a process involving as many as 20 workers.  Makers of guards and sticks shaped the material by hand until a French inventor in 1859 made a machine to do the cutting.  The leaf design was created by artists and these designs were later copied at the factory.  After the leaves were pleated, the sticks were inserted and glued into place.

By the late 18thC nearly every woman in the western world owned a fan.

The fan is associated with specific body language, often referred to as the “language of the fan” as the motion of the fan was thought to be a means of communication.  As a fashion accessory it defined femininity, denoted class and social status.

Catalog from an Art Nouveau exhibition at The Fan Museum

Many museums have very large collections of fans, including The Hand Fan Museum of Heraldsburg Ca. and The Fan Museum of Greenwich, London UK

Further information can also be found at the Fan Association of North America.

Posted by Margy Norrish at 1:16 PM No comments: