Battenberg lace, also called tape lace, is familiar to most of us.  Tape laces are made on a foundation of fabric tape.  Originally, the tape was handmade needle-lace or bobbin lace, but since the industrial revolution commercially made tape has been available for purchase in varying widths.

The tape is basted onto a pattern of either paper or fabric.  A sturdy thread on either side of the tape made be gathered to adjust the tape to the curves of the pattern.  Then a variety of needle-lace stitches create the lace-like filling in the areas between the tape outline.  Stitches include, but are not limited to, buttonhole, bar or “bride” stitches, Russian stitch and net stitch (along with many variations of the above stitches).  These filling stitches do not pierce the ground fabric but form a cohesive fabric that is connected to the ground by the original baste stitches securing the tape.  Once the design is finished, these basting stitches are removed and, voila!, you have a piece of lace to be used as a corner piece for a collar or hankie or appliqué or insertion for a dress bodice.

In modern applications one could use a sewing machine to produce the filling stitches, using a dissolvable ground that is rinsed from the lace. 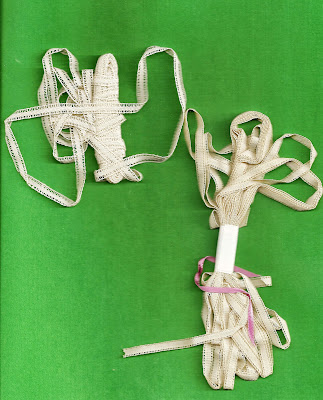 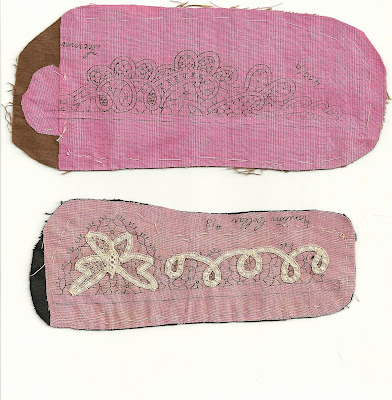 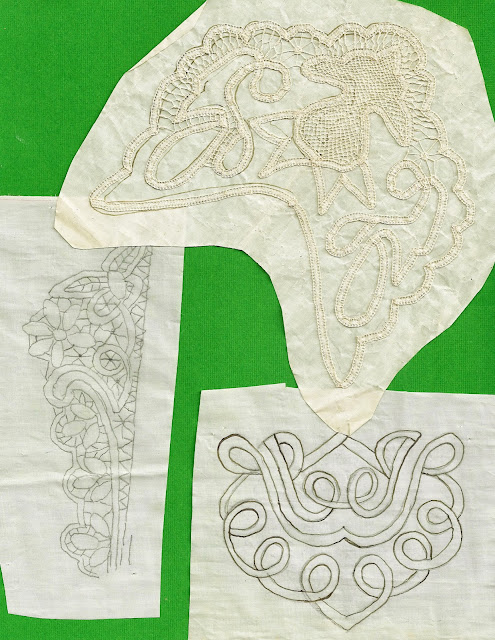 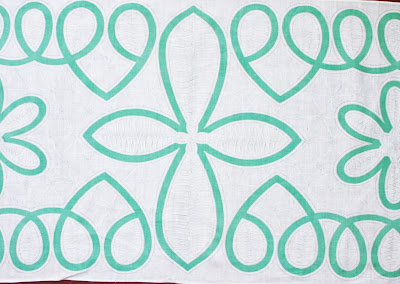 preprinted pattern for a dresser scarf 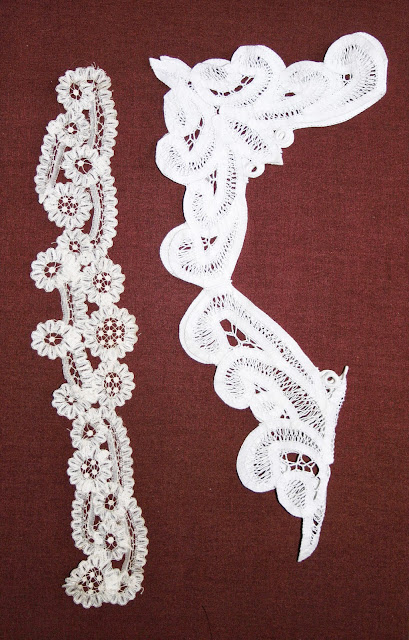 For needleworkers of all levels, this type of lace can be made over a weekend.


Posted by Margy Norrish at 3:15 PM No comments:

Do you have a few hours a month?  Do you want to improve your proficiency in your favorite pastime?  Do you wish to make new acquaintances who share your interests?
Then join a guild.  There are guilds in every endeavor, from art to weaving located right in your community.  Large or small, these groups provide inspiration and instruction with the added bonus of a pleasant social atmosphere.

Last week I was invited by the Dropped Stitch Knitters Guild of Albuquerque  to present a program on textile history.  Note the presentation was NOT on the subject of knitting, as I can make a scarf, which looks better bunched up or tied, but that’s about the extent of it.

Guilds date back to early medieval times, although I believe from much earlier times groups of artisans  formed associations to protect their interests.  It was during the 12thC that the formal organizations known as guilds were introduced into society.  The first guilds to appear were Merchant Guilds, followed by Craft Guilds whose main purpose was to maintain a monopoly on their products and no one could practice a craft without belonging to the guild. Therefore, there was a guild formed for nearly every occupation from bakers to lacemakers.

Guild members were protected from dubious practices such as price-fixing, revelations concerning processing secrets and price-cutting.  Hours of work were regulated and there were strict guidelines for quality of workmanship, as each article had to be inspected and  approved.. Each guild member was expected to perform public service.

There were three levels of guild membership: apprentice, journeyman and master.  The apprentice, usually a male (although there were guilds who admitted women), lived with the master.  His room and board and tuition expenses were paid for by his family.  During this time he was not allowed to marry.  After a period of 2-7 years, depending upon his trade he would then become a journeyman.  Journeymen received a salary and were also housed in the master’s home.  In order to obtain the status of master, the journeyman had to produced his “masterpiece”, working on his own time and purchasing his own tools and materials.

But back to the Dropped Stitch Knitting Guild.  These ladies are serious knitters.  Seriously wonderful knitters.  During Show and Tell each produced their current or recently finished project.  Knitted animals for a grandchild, absolutely gorgeous shawls and wraps and one unbelievable graduation gift.  The gift was intended for a graduate of astronomy and featured 2 round (I would say each nearly 45 inches in diameter) depictions of the night sky: one of the northern constellations and the other of the southern constellations.  The membership of this group, like all guilds, includes all levels of expertise. Beginners can be inspired, experienced artists can explore new techniques and materials.

So, again, if you want to sharpen your skills or learn new ones, join a guild.
Posted by Margy Norrish at 2:54 PM No comments:

Such a Simple Tool - The Safety Pin

Such a Simple Tool- The Safety Pin

Have you ever faced a missing button, a drooping hemline or gaping closure?
Textiles often need additional “hardware” for them to function as articles of clothing: buttons, zippers and pins.   Far back into history, as early as the Bronze Age, metal skewer-like objects served as clasps to hold lengths of whole cloth together, forming a semi-fitting article of apparel to function as a loose body cover and protection from the elements.

In Roman times these closures, known as “Fibulae”, served as brooches to fasten tunics and togas .  Wealthy folk in Medieval Europe used elaborate pins made of precious metals and ivory, and by the 1400’s pins were made from drawn wire and much more affordable to the common population.

However these early fasteners had a slight disadvantage in that they were quite sharp, there are many references to their use through the ages as weapons.


Got a Baby?  Then you have these!

Today, pins are made of steel, brass and stainless steel. Every household has many of these fasteners in many sizes for a wide variety of uses , they really are invaluable!

From small to huge 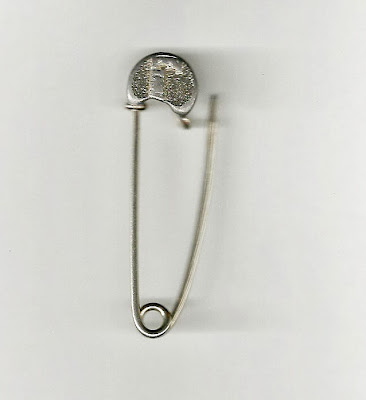 Remember when price tags were easy to remove?

Safety pins used as fasteners on the backs of jewelry pins

My favorite bracelet made of beads and safety pins
Posted by Margy Norrish at 1:26 PM No comments: 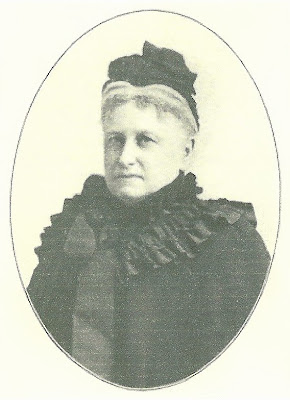 Candace Wheeler nee Thurber was born in NY State in 1827.

At the age of 49, having raised 4 children, she began a textile career as a designer

In 1877 Wheeler and a NY matron, Mrs. David Lane, formed The Society of Decorative Art of  NYC, instructing women in painting, porcelain and pottery, and decorative needlework..

Partnering with Louis Comfort Tiffany as a textile expert in 1883, they and other decorative artists founded Associated Artists, an interior decorating firm, staffed entirely by women.  The firm closed in 1907.

Wheeler wrote many books on home decorating and embroidery, including her autobiography “Yesterdays in a Busy Life” at age 80.

In this volume Wheeler wrote of ideas to create a garden of flowers in bloom from June to October.  She personified her florals with human traits.
Posted by Margy Norrish at 2:58 PM No comments:

For the past ten years the International Folk Art Museum in Santa Fe sponsored an amazing market of folk art from around the world. Crafts-people bring their wares from their home countries to vend at the market and participate in festival activities which include music, dance and performance arts.  Over the past ten years 650 artists from 80 countries and 6 continents have participated and their earnings have impacted not only their lives but also those of their countrymen back home. From Afghanistan to VietNam
proceeds from their sales have enabled the establishment of workshops in their homelands which bring much needed income and immense self-satisfaction to the people.

There is every type of craft and folk art available.  Naturally, I must inspect each booth and discuss the products with the artists.  But the textiles!!!! The textiles are exquisite and I can have any questions answered by the creators, themselves.  There is always a translator available as many of the artists do not speak English.  In fact, this is often the first time they have left their native country. (What a shock that must be for them)

Here are some photos of the market and the beautiful articles of art.
Already, I am looking forward to next July and the 11th Market. 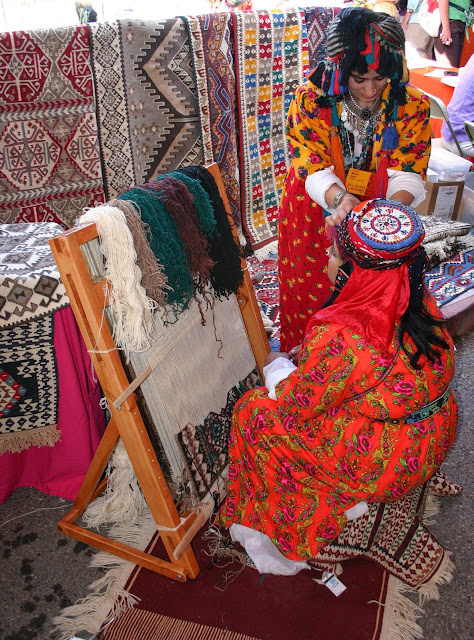 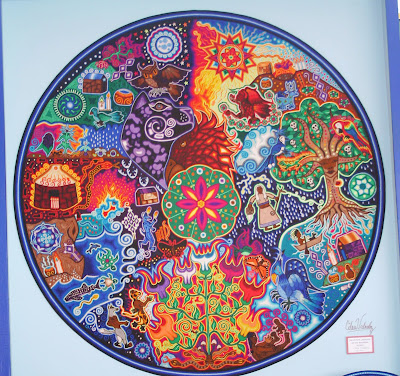 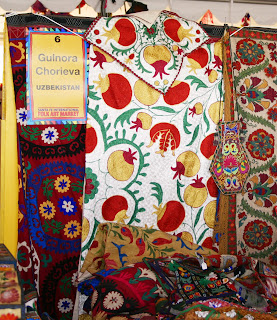 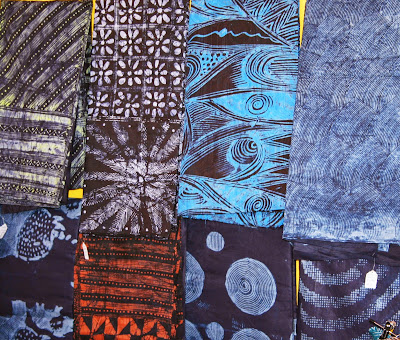 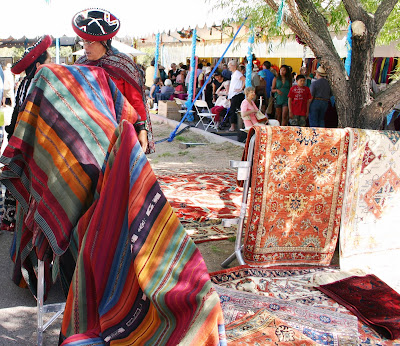 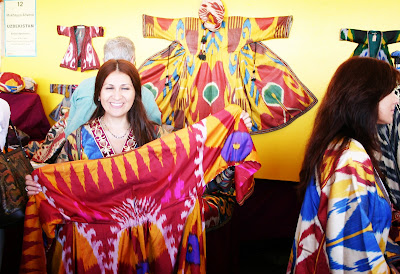 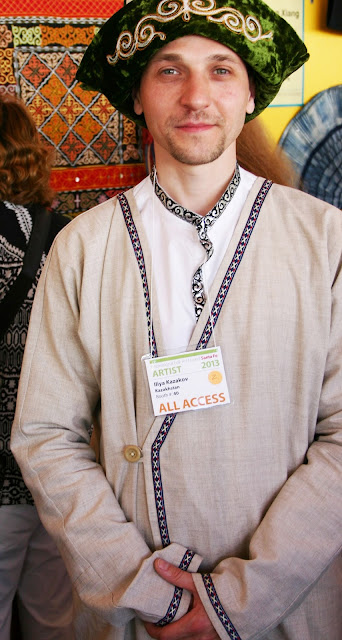 Santa Fe is a designated UNESCO City of Crafts and Folk Art and the first city to be named to UNESCO’s Creative Cities Network.
Posted by Margy Norrish at 2:55 PM No comments: