Paracas Necropolis and the Paracas Mantle

Paracas, from the Quechua language of the Quechua people of Peru and parts of Bolivia, Chile, Equador, Colombia, comes from "para-ako" which means "sand falling like rain".  The Paracas flourished on the south Pacific coast of the central Andes in Peru around 600-150 B.C.E.  It is one of the earliest known complex societies in South America. 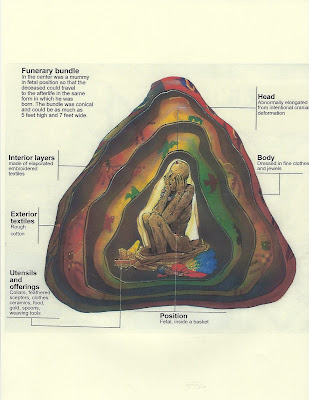 In the ancient burial grounds on the Paracas Peninsula the dead were wrapped in layers of textiles into "mummy bundles".  The largest and richest bundles contained hundreds of brightly embroidered textiles, feathered costumes and jewelry, as well as food offerings.

Over the course of several years the noted Peruvian archaeologist, Julio Tello, recovered 394 such bundles.  Because of the hot, dry nature  of the peninsula everything they found was in a remarkable state of preservation.


The Great Paracas Necropolis was discovered by archaeologists during the 1920's.  This vast communal burial site held 420 bodies.

The Paracas Textile is a complex mantle or cloak, most likely a ceremonial object.  It measures 58 1/4 x 24 1/2 in.made from camelid fiber and cotton.  Mantle consists of 90 individual, colorful figures decorating a border.  the border of 3 dimensional figures are embroidered in cross-knit looping. The interior cloth is simple, possibly of an earlier date. Cross-loop stitch flowers join the border to the central cloth. 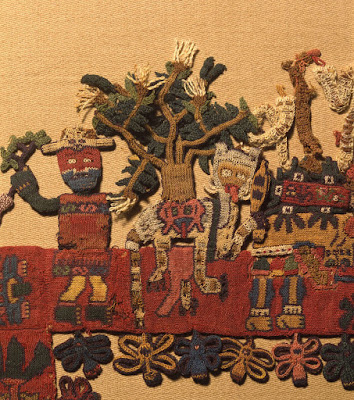 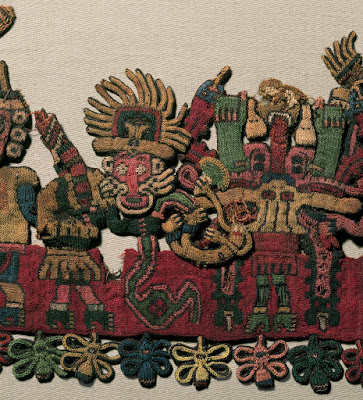 There were, of course many other textiles excavated from the Necropolis.


Posted by Margy Norrish at 1:00 PM No comments:

Textiles are fragile, ancient textiles are exceedingly so. It is remarkable that there are any extant, ancient textiles surviving to tell their story. These fragments of cloth were created from natural materials, which suffer from climate variations, moisture and the ravages of insects and vermin. So where is it that these survivors were, and still are, being found? One source is burial sites. The mummies of Urumchi, and their coverings, were preserved, according to Elizabeth Wayland Barber, by being buried during the winter months in the Asian desert, sort of “freeze-dried”. Some early burials in Europe were preserved in peat bogs which prevented oxygen from penetrating the corpse bundle. We are familiar with the ancient Egyptians whose mummification practices and burial tombs survived for centuries.

All these sources remained intact until the arrival of tomb raiders and looters. Naturally, one would choose to collect jewelry, pottery, coins and such rather than fragments of cloth. After all, the looters had to satisfy their clients with display-worthy trophies. But if you are thinking that these bands of entrepreneurial ghouls , in the dark of night, risking all to eke out a living for their families are the only culprits, you are ignoring the professional grave robbers, many archaeological expeditions of the past.

Universities and their museums depend upon wealthy patrons.  In the past patrons gained much social status by donating collections as well as monies for buildings to house them to which they appended their name.  The people of the Victorian age were extremely interested in natural history, as witnessed by the overwhelming number of objects displayed in drawing rooms, libraries and almost everywhere there was an open surface.  Definitely a "more is more" philosophy. The excavation of the tomb of King Tut brought "amateur archaeologists" and their families in droves to dig sites, often supervising the sites themselves with little knowledge about proper catalogue procedures.  The result of their efforts were trunk-loads of artifacts removed from the site to their homes.  Government-sanctioned expeditions "invaded" countries and , in the name of preservation  and education literally stole the heritage of the native people. This looting continues today.

The reason for this blog is my research into Pre-Hispanic textiles of Peru Some burial sites contain hundreds of textiles.  One of the most famous is the Paracas Necropolis. The Great Paracas Necropolis was discovered by archeologists in the 1920's, a burial. site containing 420 bodies, dating 300-200 BCE .  Julio Tello, the Peruvian archaelogist began excavating Paracas after witnessing looted textiles in the Lima antique markets.However, in 1930 he was forced to abandon Paracas to the looters who exported antiquities illegally abroad.  It is reported that the Swedish Consul General in Peru exported  textiles to Sweden to form what is known as the Gothenburg Collection.  Due to questionable exhibition and storage conditions many of these textiles are in very poor condition.  Although Peru wants these textiles returned, like many countries seeking to reclaim their properties, this is not going to happen.

Next blog we will look at the famous Paracas textiles.
Posted by Margy Norrish at 12:36 PM No comments: