In my previous blogs I discussed the members of the camelid family: camels, vicunas and guanacos.  Two other species belong to this tribe, alpacas and llamas.

Llamas are used primarily as pack animals and there are three types of SouthAmerican llamas in existence today, the wooly type, the non-wooly type and an intermediate.  While some llamas shed their wool, others have to be shorn and because their fiber tends not to be consistent, it has less of a commercial use.  Frequently their fiber is blended with sheep wool. 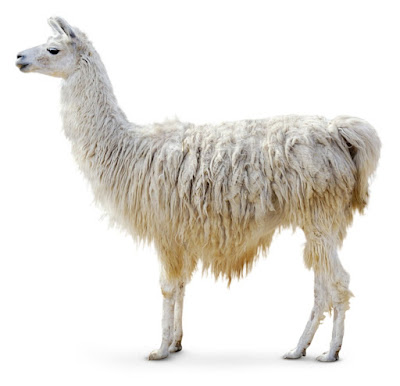 Alpacas are smaller than llamas and are bred for their fiber.  There are two types of alpaca, the Huacaya and the Suri.   The huyaca or “ wooly “type is the most prominent, while only less than 10 percent is suri with long, sleek fibers.  Processing in Peru includes sorting the fibers for natural color shades (22) and several quality grades.  Nearly half the yield is graded as super fine. Each animal will produce 7-10 pounds of fleece per year.
Alpaca textiles are light-weight woven fabrics, stronger than sheep woolen fabrics with a silky luster.  Frequently alpaca fibers are combined with manufactured fibers.

Posted by Margy Norrish at 1:07 PM No comments: