There is something irresistible about a mirror.  It dazzles, it shines and it reflects light so that you can see your own image when you open your compact.  Who can resist checking yourself out when passing a mirror in a store in the off chance you have become the twin of Audrey Hepburn, while crossing the parking lot.  (I happen to think Miss Hepburn was the most beautiful and classiest woman).  Shiny elements are so attractive they are used in luring us to buy lurex and satin and dresses with rhinestones, not to mention diamond baubles to wear to the palace.  Advertisers have a field day with mirrors and reflective surfaces.

The earliest mirrors were hand mirrors and by the 1st century CE they were made to reflect the whole body.  These early mirrors were made of highly polished metal.  The use of glass, which was then backed with a metallic coating, was perfected by the Venetians during the Middle Ages.  Today mirrors are made by applying a thin coating of aluminum or silver onto a plate of glass in a vacuum.

To certain ethnic peoples mirrors play a very different role, one of protection.  Some believe, especially in the Islamic world, that mirrors can trap the Evil Eye holding it forever. And because mirrors can also refract (refraction is bending the light ray) it can disperse the power of the Evil Eye.  To those unfamiliar with the concept of the Evil Eye, it simply means that some people possess the power of harming others merely by looking at them.  I believe I have actually met such people.  So it is not unusual to find textiles embellished with small mirrors or other reflective objects in NW India into Afghanistan, Central and Eastern Europe and W. Sumatra  where there is a history if Islamic influence.

So onto the Special Shells.  The cowrie shell of the mollusk cypraea moneta, is one of the most powerful of all embroidery embellishments thought to possesses magical powers of protection and to bring good fortune to the wearer of the garment.  The white cowrie is found in the Indian Ocean around the Maldive Islands. This shallow water species is found around reefs and rocky shores.   It was widely accepted as trade and currency.  The shells were embroidered onto royal robes of Africa and headdresses and animal trappings from India to the Middle East.

It is in the textiles of India that the combination of small round mirrors and cowrie appear most often. 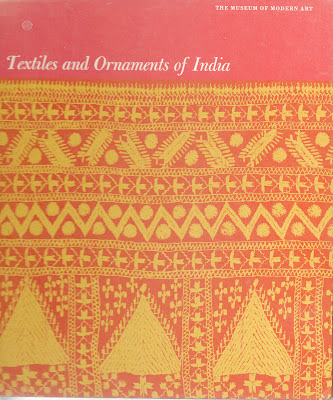 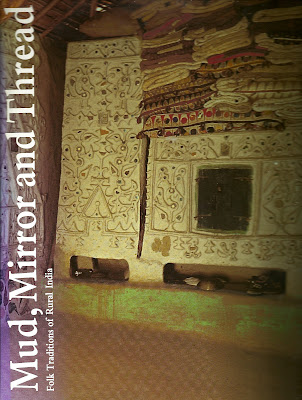 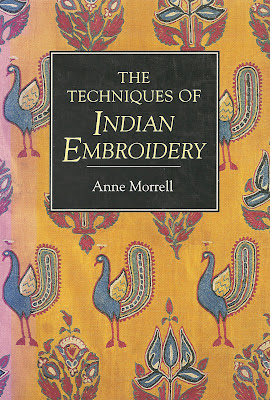 The mirrors, originally small bits of mica, now glass or even plastic, are held in place with a few cross stitches and then securely fastened with a button-hole like stitch.  They are not scattered randomly but are usually found to be placed as the eye of an embroidered animal or the center of a flower. 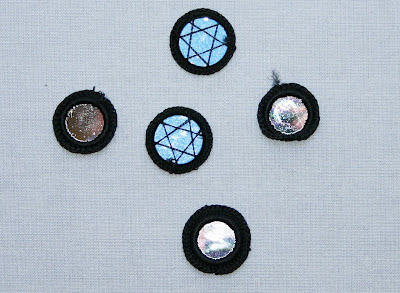 These plastic "mirrors", ready for use, were purchased as craft supplies 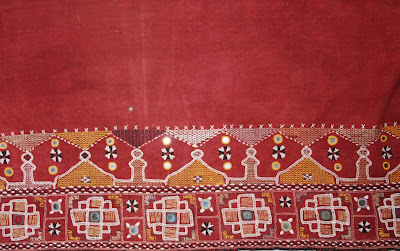 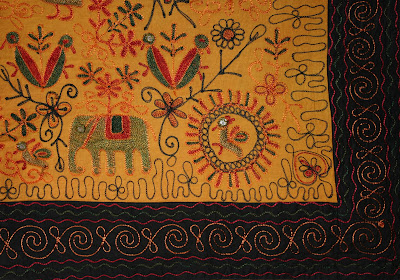 Embroidered tables cover. Note the mirrors as eyes of the birds and elephant and also as centers of the flowers 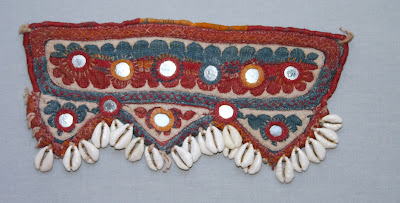 Posted by Margy Norrish at 3:02 PM