Slavery in the Factory - Part 3

Slavery in the Factory – The Triangle Shirtwaist Factory Fire

Just after the turn of the 20th C industrialization had taken over most of the larger cities.  Thousands of immigrants (some were trained, many were not) flocked to the cities seeking work.  David Von Drehle (Triangle) writes that “nearly 100 or more Americans died on the job every day in the booming industrial years around 1911”. 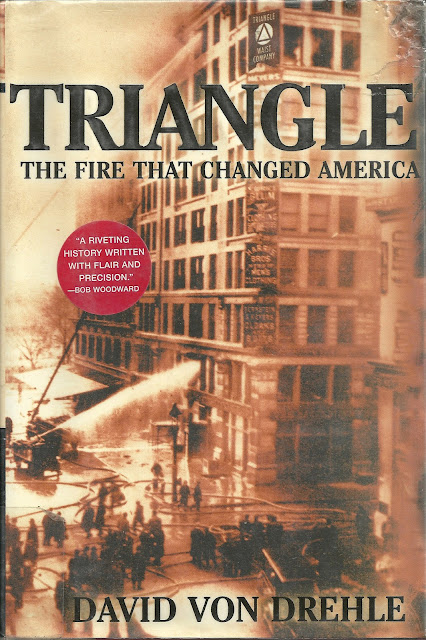 Regulations regarding worker’s safety were scarce and usually disregarded.  Complaints by workers were ignored and attempts to improve conditions were met harshly.  After-all, the dissident workers could be replaced almost immediately by others seeking work.

The fire at the Triangle Shirtwaist Factory, the largest blouse- making factory in NYC, would prove to be a pivotal point in forcing reforms not only in New York City but in the rest of the US as well.

On Sunday March 25, 1911 this fire became the worst workplace catastrophe in history.  The entire tragedy took place in less than ½ hour. More than 146 workers perished.  It is not certain exactly how many employees were present on the 9th floor of the factory, but there were 278 sewing machines on the assembly lines.  Space was crowded with bales of fabric, cut and ready to assemble.  Waste littered the floors.  There had been some reform at the factory, following a newsworthy workers’ strike, but conditions were still dangerous.  The overcrowding of workers and machinery, the pitiful fire escapes that could only accommodate one or two persons abreast and, unbelievably, locked doors to ensure workers did not leave early or remove scraps or other materials from the factory.

How could this have been possible?  At the time factory owners were usually wealthy businessmen who looked for investment potential.  Many owners owned dozens of factories in many cities.  The management was left to supervisors whose pay was a reflection of the amount of product that the factory workers produced.  Therefore everything possible was done to ensure maximum output with minimal overhead.  This included the salaries of the workers.  There was also the political structure, which turned a blind eye to the plight of factory workers in favor of the owners, who would have naturally contributed to the campaign chest of the politicians.  Included in the network of allies were building inspectors, and even police and other city employees of rank.

Today there are laws regulating working conditions and oversight by the public and the press.  However, there are still dangerous working conditions.  With regularity there are mining disasters, heavy equipment failures and issues with faulty machinery.  The cheap products we have come to enjoy, come at a price.  That price is a hefty one.

In the next installment on this issue we will view factories and their conditions abroad.
Posted by Margy Norrish at 1:20 PM