"D" is for The Draper Corporation

“D” is for The Draper Corporation

Today, we take technology as a given.  New advances are made daily, increasing the productivity of our endeavors.  These advances are exponential, not linear.  By this I mean the tech wizards do not rely on a step-by-step method of discovery and advancement (starting from the beginning every time) but rather on the entire “mass” of information available.  Because we are so demanding of immediate advances  ( new cell phone technology is a great example) we forget  the difficulties encountered in the past by the pioneers of mechanization, the tinkerers and the inventors.

When the Draper Corporation ceased making power looms for textile production in the mid 1970’s, it had been in operation for over 130 years in Hopedale MA, and was once the largest maker of power looms. 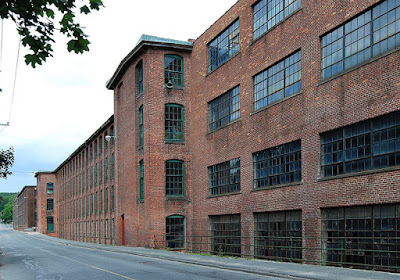 Ira Draper was a wealthy farmer from Weston Massachusetts with an ability to improve heavy machinery, making it more efficient.  His great-great-grandfather, from Boston, was one of the first of the colonists to begin a business weaving and selling cloth, so textile production was an interesting pursuit for Ira.  In 1816 he obtained a patent for an improved flyshuttle hand  loom and the first self-acting temple.  The loom temple was a moving device allowing the weaver to manage 2 power looms at the same time   In 1829 he received a patent for an improved version off his original design and later sold his patents and the business to his son, James.

Ebenezer Draper bought the business from his brother, James, and in 1853 another brother, George, joined the firm of E.D.& George Draper.  Over the years, he created dozens of variations of the spindle.  Following Ebenezer’s retirement in 1868, George directed the company into the developing area of Ring Spinning.  By 1887 the company owned patents of 12 varieties of ring spindles. There are two methods of spinning Mule spinning and Ring spinning.  Mule is a type of spinning frame with an intermittent action.  It was used to a considerable extent for spinning wool, but only in limited usage in this country for cotton.  Ring spinning takes place on a ring frame which drafts the roving, twists the yarn and winds it on a bobbin simultaneously and continuously, greatly more efficient.

Many automated looms had been patented but were found to be impractical and were not used.  The Draper brothers decided to redesign and  manufacture automated looms.  One, the Northrop loom (named after its inventor, James Northrop), was redeveloped, allowing the weaver to run 16 looms at once.  In 1895 the Northrop Automated Loom was patented in England, Belgium, Germany, Russia, Austria and Spain, selling over 60,000 looms by 1900. 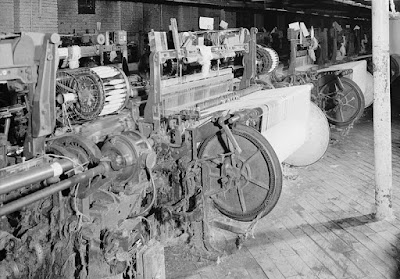 For many decades the Draper Corporation continued to make improvements on their products, selling to southern textile companies after the northern mills had closed.  In1967 the company became part of Rockwell International, ceasing production in the mid 1970’s.

I am a great admirer of these far-sighted pioneers who through their imaginations and hard work have made incredible advances possible.

Posted by Margy Norrish at 1:58 PM