On the outside of the patio door to my office is a huge spider web.  I would say about 18 inches in diameter and tethered  to various hanging baskets.  The spider responsible is an enormous orange garden spider who appears occasionally in the center of the web, otherwise I don’t know where it resides, which, I admit makes me nervous when I’m outside.  I don’t like spiders at all, but “Goldie” is living outside and her web is so delicate and intricate that I find myself looking at it often. 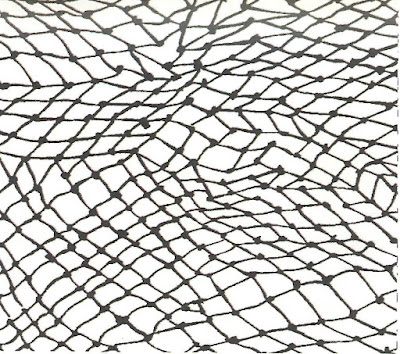 \
Many years ago I was writing an introductory course on Textile History  (Textiles 101, if you will) and prepared a lecture on little-known animal fibers.  Several animals produce silk filaments, of course Bombyx mori is the most notable, but certain mollusks, insects, as well as my “unfriends” the arachnids.

According to the Roman poet, Ovid, Arachne was widely noted for her weaving skills and challenged the goddess Athena to a contest, which, apparently she won hands-down.  Now Athena was never known to be a gracious loser and in a rage of envy destroyed Arachne’s beautiful tapestry.  In despair, Arachne tried to hang herself , but was transformed by Athena into a spider.

As silk producers, arachnids ( nearly 300 million years ago) far preceded the silk “worm”.
The physical properties are very impressive.  Different species produce silk of varying characteristics.  Spider attachment discs are made of a strong glue to secure the draglines and framelines.  Certain species produce a dragline silk that is stronger by weight to steel, surpassing Kevlar.  This excellent tensile strength has been suggested that a pencil thick strand of silk could stop a 747 in flight., and its elasticity is superior to Nylon.  Some silks are good insulators, while some absorb water, and some are water resistant.  The reason insects, when in contact with a web, cannot escape their demise is as special silken thread called “cribellate” which forms a fine sticky mat combed atop the more substantial silk tract.

Historically, several cultures have used spider silk medicinally , as well as for fishing nets  There have been attempts to use the silk for textiles in the early 1700’s but the care of the living spiders proved too difficult.  Speaking of difficult, in the 1800’s spider silk was reeled directly from harnessed spiders.  The military has long investigated spider silk for strong lightweight materials.

DuPont’s advertisement in the Scientific American of July 1996 tells that they were studying these biopolymer structures of spider webs by using recombinant DNA technology.  I had not heard more about this research until several years ago while attending a Textile Society conference, I met a retired chemist who had worked for DuPont.  She told me a fellow chemist had resurrected these studies.  So maybe, we shall see spider filament for use in textiles.