In Meet the Camelids (part one – 4-15-18) I discussed the origins of members of the camelid family, namely old world camelids, bactrian and dromedary camels who are descended from a tribe of North American animals, the Camelini.  These animals migrated to Asia across the Bering Land Bridge and became the camels of Asia and Africa.

Today I wish to present the second tribe of the now extinct North American camelids, the Lamini.  This tribe was to become the South American camelids, vicuna, guanaco, llama and alpacas.  The original ancestor Limini gave rise to two independent and distinct populations, both wild: Vicunas and Guancos.

Vicunas, the smallest of the camelids, arrived in South America nearly two million years ago on the altoplano of the Andes mountains.  When the European invasion of South America occurred it was estimated that there was nearly 2 million vicunas, however, over the ensuing years the population dwindled to nearly extinction due to hunting.  The down of the animals is amongst the most expensive in the world and was a forbidden export for international trading.  Now due to the efforts of Peru, Argentina and Bolivia and Chile the numbers have increased to the extent that natives of the Andes are allowed to hand gather the wool and export it legally.  There is some farming of the animals taking place in Argentina, while other countries depend upon gathering the wool from flocks in the wild.  It is possible for vicunas to breed with South American alpacas producing Paco-Vicuna.  This is rare and is not permitted to happen (if it can be avoided) by those wishing to keep the vicuna breed pure and from further extinction.  Since it is thought alpacas are descended from vicunas there has been DNA research to find animals that are alpacas but with vicuna traits.  Since vicunas cannot be exported these animals are being bred instead in North America..  These are also called Paco-Vicunas but are , in reality specially bred alpacas. 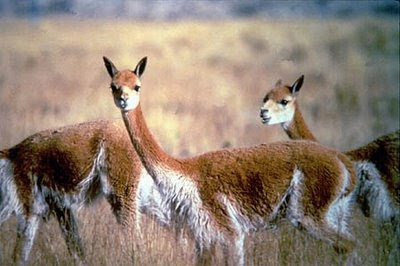 Guanacos live in the high plains of Chile and Argentina and to a lesser degree in the mountain regions of Equador, Bolivia and Peru.  As with the vicunas they suffered from the Spanish emigration, now numbering around 400,000-600,000.  Although they are considered wild, they are easily tamed and can be found in US zoos and private farms.  They are double-coated, like llamas with soft downy undercoats.  Their fiber, while sparse, is secondary in fineness to vicuna. 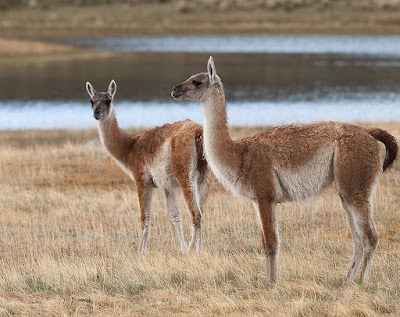 Guanacos are the size of a medium llama with brown coats and white underbellies and gray faces.