Before the existence of RV's, double-wide mobile homes and "tiny "houses which can be towed by pickups, nomadic peoples throughout the world constructed shelters which they could easily dismantle and take with them.


The nomadic pasturalists of Central Asia lived, according to the Chinese, in the "Land of Felt" as their world was dominated by a single fabric:woolen felt.  Felt was used for clothing and in the construction of yurts (called "gers" in Mongolia).  Since the 5thC, Central Asian nomads have used round, felt-covered yurts with collapsible wooden frames as portable housing when herding sheep, horses and cattle.  Pasturalist nomads are not constantly on the move as we understand the word "nomad".  They move their herds from winter to summer pastures and live in semi-permanent camps.  Some kept both locations and moved their livestock between them. The yurt while capable of being transported by cart (now by truck) was constructed on site.  The walls are made of hand-hewn willow and poplar branches that are joined by leather thongs.  Wooden door frames are hung with intricately carved doors and there is a domed smoke hole in the roof's center.  Following erection of the frame the yurt ids draped in wool felt mats and an outer covering of reed mats which provide protection and insulation.  Light-weight, yet sturdy,  they are earthquake resistant and provide excellent protection from wind and cold.  Ordinary yurts are plain grey, those used for weddings and other ceremonies are white and lavishly decorated.  The yurt's interior is surprisingly large with  specific areas for eating and communal activities and others for sleeping.

The Lavvu is a temporary structure used by the Sami people of Northern Scandinavia enabling them to follow reindeer herds.  It is constructed by three or more evenly spaced poles which are notched forming a tripod for support, then ten or more straight poles are laid up against the tripod.  There is no need for stakes or ropes or center pole to provide stability.  Reindeer hides were used to cover the lavvu until the mid 1800's until British textiles were made available.  Inside the living quarters of the lavvu there is a fireplace in the middle which is used for heating with a smoke hole at the top of the structure which is usually left open. 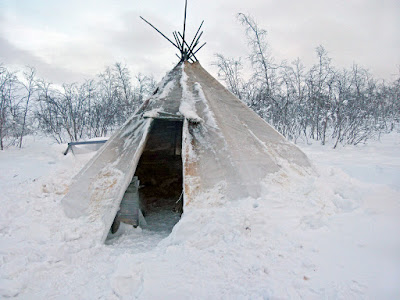 The Plains Indians of North America erected tipis as they followed herds of bison.  Using multiple "lodge" poles 12-15 feet in length which are tied together at the end and raised upright and adjusted on the ground, the tipi is nearly ten feet in diameter.  Tanned (and untanned) buffalo skins are sewn together and their lower edges are secured to the ground by tent pegs.  There is a central fire pit and an extra skin at the top to be opened to facilitate the escape of smoke. Tipis were easily set up and dismantled to allow camps to be moved.  The poles of the structure were used to assemble a dog pulled travois upon which additional poles and the coverings were placed. 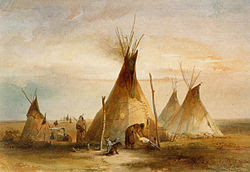 Posted by Margy Norrish at 1:50 PM