Hair, the musical opened on Broadway in April 1968 and ran for 1,750 performances.  A London production ran for nearly 2,000 performances.  I saw Hair in Washington DC and I must say it was a revelation.  Perhaps it is not so controversial today, but profanity, nudity and political rebellion certainly was at that time.  Still, many of us can at least hum the tunes, if not totally successful with all the lyrics.

Hair and textile history?  Well, the point is that hair is an animal fiber, often termed interchangeably with fur or wool or kemp depending upon the species of animal.  For instance, “my cat has a beautiful fur coat but the cat hair all over the furniture is driving me crazy”. 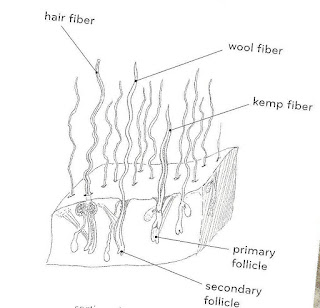 As you can see from the diagram, wool, hair and kemp are morphologically different but all arise from the epidermis of the skin, this includes human hair.

Today, we are not discussing hair as a textile fiber but the use of human hair in quite a different way.

Since ancient times a woman’s hair was regarded as one of her most attractive
physical attributes.  Hair styles reflected the fashion of the day.  Curling, straightening, dyeing techniques have been employed both professionally by stylists as well as in the home. Great care was taken  in selecting brushes, combs and other accessories for the lady’s vanity or dressing table.  These accessories were often costly and carefully kept safely in elaborate boxes, or fabric envelopes.  Very popular were embroidered fabric liners or embroidered bags. 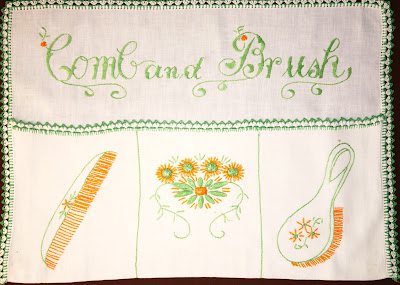 From Victorian times to the mid 1900’s a common accessory for the vanity was a hair receiver.  These receptacles can be identified by the center hole in the lid into which hair taken from combs and hairbrushes was “poked”.  Usually round, but may be square in shape, some were footed and were made form a variety of materials: porcelain, metal, glass and celluloid.  Celluloid is a tough thermoplastic compound, which was used to replace ivory.  It was easily shaped and used for dressing table sets, dolls, picture frames, buttons and buckles.  Unfortunately it was flammable and was subsequently replaced by Bakelite and Catalin.  Both are usually referred to as Bakelite, however Bakelite was produced in only 2 colors, black and brown.  Used for appliances, pot handles because it did not melt.  What we refer to as Bakelite colorful jewelry was actually Catalin, which was produced in a glorious rainbow of colors. 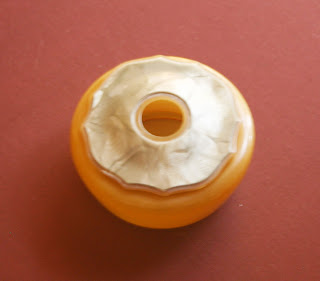 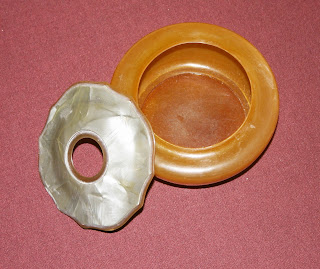 So what happened to the hair from the receivers?  Some may think it was used in Victorian hair work called Pointe Tresse, using fine hair for embroidery and mourning wreaths. But this required straight hair (usually cut) and not tangled from combing.  Actually, the hair was used as stuffing for pin cushions and often to stuff ratts.  Ratts were made from stuffed netting and inserted as part of the woman’s hair style for fullness.  I guess the women could then truthfully say that their style was not a wig but “all their own hair”
Posted by Margy Norrish at 3:04 PM