Molas are highly embellished cloths created by the Kuna Indians  of Panama.  The word “mola” (meaning “cloth” in the Kuna language) can refer to the panel itself or to the traditional woman’s blouse made from these panels.

The Kuna fled from the Panama mainland to the coast, Comarca San Blas, and to the San Blas Islands during the Spanish conquest.  Only a small number of the islands are occupied (about 45 out of over 300 islands in the archipelago) and until recently were consider fairly remote, although women canoed daily to the mainland to secure drinking water until 30 or so years ago when water was piped to some of the islands. Interestingly, the Kuna are considered to be the only indigenous Indians never to have been conquered. 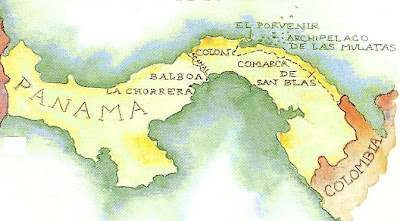 Molas are made by layering cotton fabric, which is indigenous to the area, not obtained through trade, and using a reverse appliqué technique to create elaborate designs. The panel may contain as few as two or three layers of different colored cloth or many, producing a rainbow of vivid color and pattern. The panel is then further enhanced with surface appliqué and embroidery. The reverse appliqué technique is more often associated with Hawaiian quilting or Tivaevae bedcovers of the Cook Islands or Tifaifai of Tahiti.  The notable difference is the intricacy of the mola designs.  Also note, the Polynesian people were taught the technique by missionaries and the cloth was not indigenous to the region.  There is no clear understanding of how the Kuna adapted this laborious technique of surface embellishment. The designs reflect the way of Kuna life in the jungle and sea.  Geometric designs are often seen as well.

In the 1960’s with help form Peace Corps volunteers a mola-making co-op was formed to offer a source of income to the Kuna women.  Today, there is quite a market for this product and the co-operative in Panama City exports these textiles as well as selling them to tourists.  Once a tourist market is established there is often a simplification in the actual product and, as with any tourist purchase, molas may vary in quality.  The higher the number of layers, the higher the quality of the stitching, the extent of surface appliqué and embroidery, naturally, the higher the price. 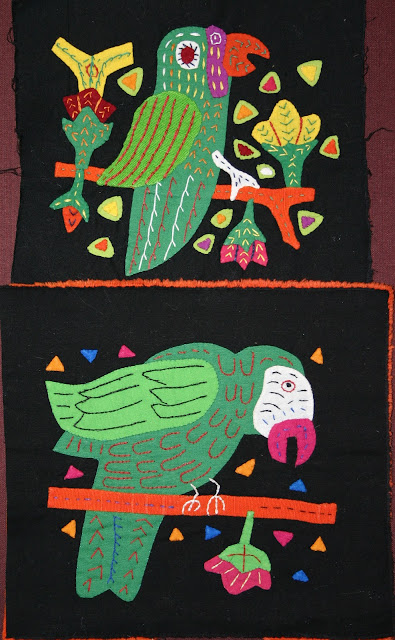 These are two very simple examples of mola panels, quite small, probably intended as patches for a shirt or pockets of a jacket.  Very tourist, inexpensive but quite vibrant and charming, nevertheless. Note that the appliqué of the main motifs (the birds, branches and flowers) is surface.  On the smaller panel the lime green flower petals are reverse appliqué and there are simple embroidery stitches, stem, button-hole and straight, in contrasting colors on each.
Posted by Margy Norrish at 12:37 PM