Last week I wrote about silk ikats of Central Asia.  Today I wish to share another beautiful traditional textile from Central Asia, an embroidered susani.

Susanis are large, embroidered panels which have various functions: wall hangings, bedcovers and curtains.  These were the most important textiles produced in the home. 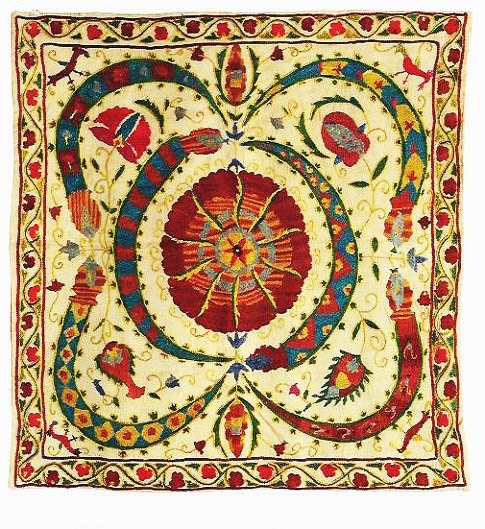 Most are now worked on a coarse cotton fabric that has neither been bleached nor dyed.  Older examples had a foundation of cotton that was locally produced and woven.  Home-loomed lengths of cotton were usually 14-15 inches in width. To make a large susani, four to six strips of ground fabric are stitched side to side.  The design is sketched unto the foundation and the strips are separated.  The embroidery is not worked on the entire surface of the large cloth but on the narrower panels (sometimes by several workers).  The strips are then sewn back together after the embroidery is completed.  For this reason, slight misaligments of the design and variations in color may occur from strip to strip. After the textile is reassembled, a backing is attached for strength.  Early susanis from the 1800’s had silk ikat backings.  When silk ikat became fashionable (and costly) it was replaced with printed European trade cloth.  Today, the backing is loosely woven cotton, similar to the foundation fabric.

Susanis were major textiles in dowries. Since large susanis required about 2 years for completion and since most women in this society were married by the age of 15, a mother would begin to embroider as soon as a daughter was born.  Tradition required that the bride’s grandmother draw the design, although professional craftswomen were often hired to draw the pattern onto the ground fabric and choose the main colors that would be used.  In Samarkand a susani was placed over the head of the bride as she was taken to the home of the bridegroom.  In other cities, the embroidered cloths were held over her head as a canopy when she was led to the marriage chamber.

Today, these colorful textiles are again being created and would bring interesting hand-crafted , textural elements to any home décor. 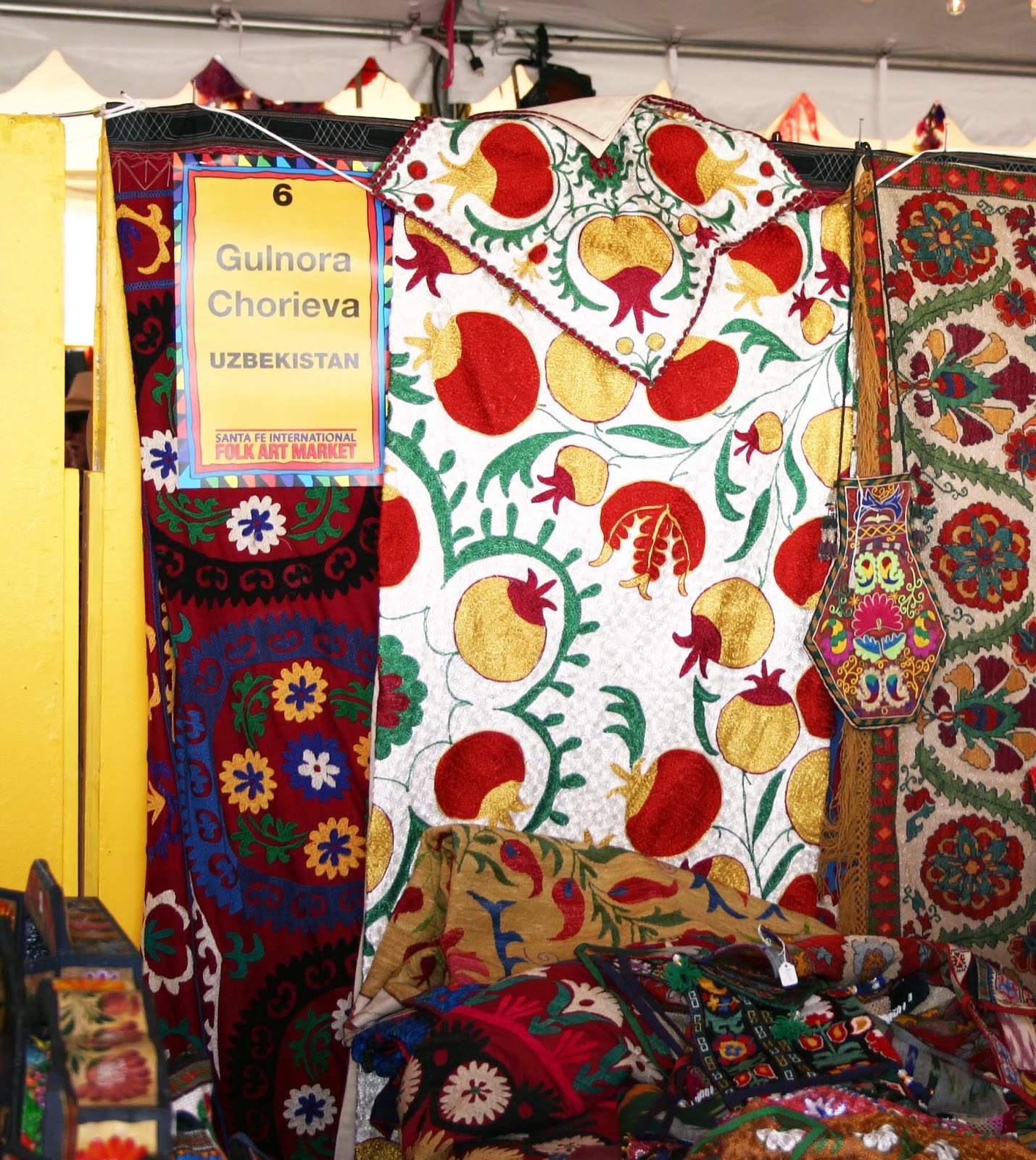 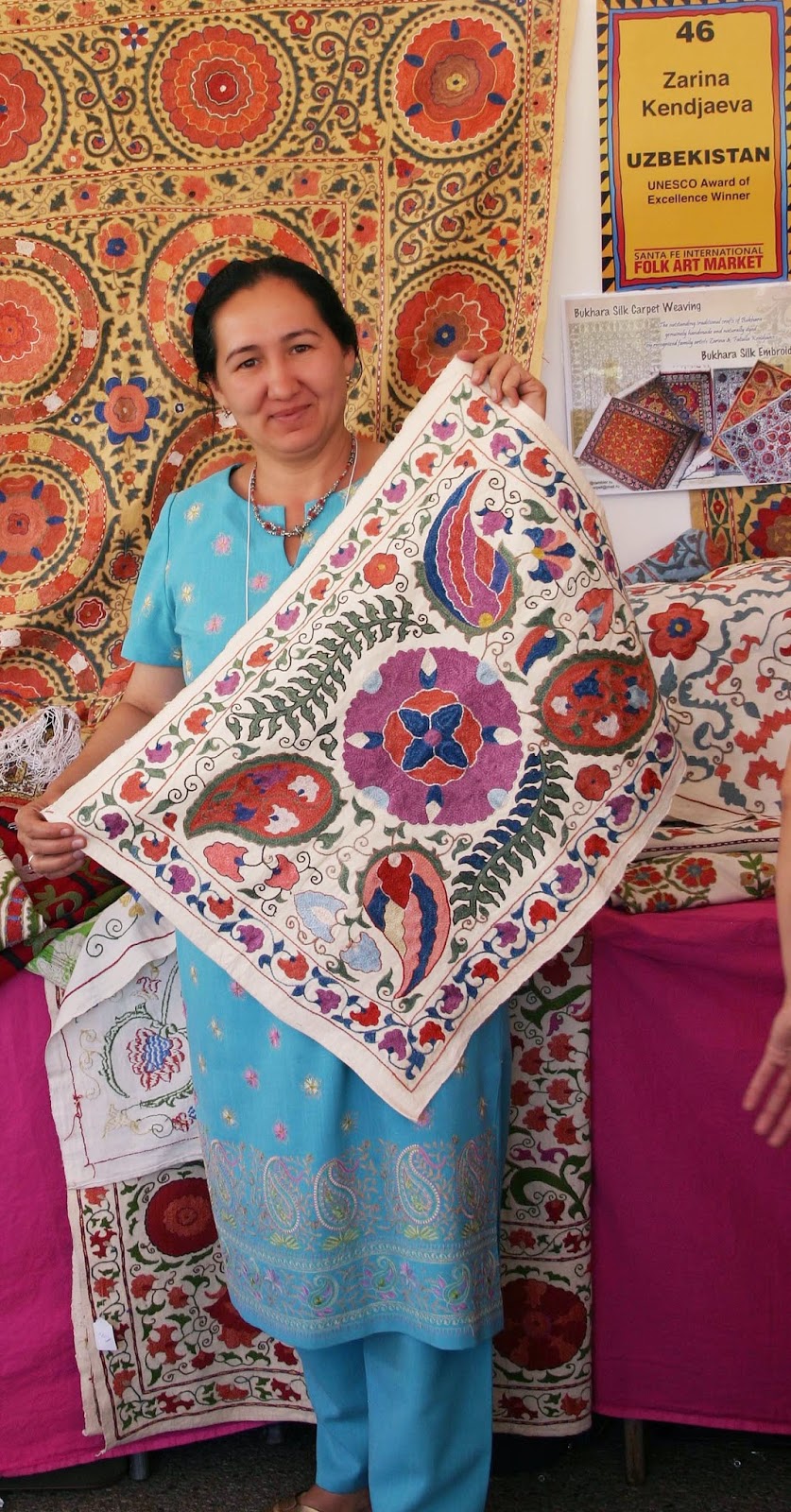 Posted by Margy Norrish at 1:32 PM