This is the third blog in my series of alphabetical themed textile topics ( A is for Amalac, B is for Burlap)

If you are not familiar with this needlework technique, it is understandable  as this type of embroidery is not common today.  The history of candlewicking goes back to the late 1600’s when Englishwomen embroidered white bedspreads.  On a twilled woven linen ground they embroidered clustered flowers and fruits in very small French knots.  Flowing vines were made from white cord laid and couched.  In the late 18thC  this knotted worked appeared in America where the white cord was replaced with “wicking” giving it the name “candlewicking”.  Wicking is the material used for making fiber to be cut into lengths used for making candle wicks.

The early candlewicking was always worked white on white.  Vines  and clusters of grapes were popular motifs, also sprays and baskets of flowers.  For early American candlewicking 4-, 6-, and 8 ply thread was used.  The needles were long with a large eye and a wide shaft.  After the embroidery was completed the spread or counterpane was washed to shrink the fabric so that the threads were held in place more firmly.

Candlewicked spreads were replaced by the production of tufted chenille.  In the late 1970’s there was a limited renewed interest in this handwork, usually for the making of small, decorated items, such as sachets.  Kits were available which contained the ground fabric, wicking, needles and a pattern. 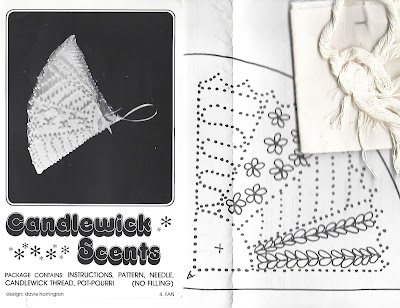 Two kits from my collection.  The Christmas stocking kit (No. 8639 "Snowflakes") was produced by Creative Moments a trademark of National Paragon Corp., NY, 1983

There are many vintage candlewicking kits in new condition available on eBay at very reasonable prices.
Posted by Margy Norrish at 10:43 AM