Tambour work is a type of embroidery that closely resembles the chain stitch.  While its popularity had waned significantly, it is returning slowly.  Originally, this type of work was done in China, India, Persia and Turkey but became quite the fad in Europe, especially in France, in the 1700’s.  The French were the first to introduce a hand held frame, they called a TAMBOUR, a word meaning drum.  The frame actually looked very like a modern embroidery hoop with two round (sometimes oval) hoops that tightly held a piece of ground cloth between them and could be tightened with a screw.  Some hoops had stands so that both hands were free to do the embroidery.  (I read in one reference that the tambour hoop was named after a tambourine, which it resembled.  Actually, of course, the word tambourine is from the French tambour also.  So you cannot always take every reference you read as factual.)  Originally, in Europe tambour embroidery was worked with white thread on a white muslin, crepe or cambic but subsequently gold and colored silk threads were used as well as heavier fibers. The Eastern workers had, and still use, wool from which to make rugs, pillow covers and other items. 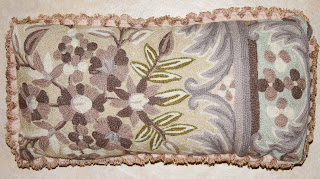 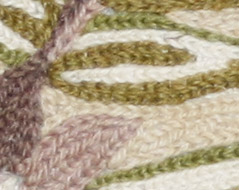 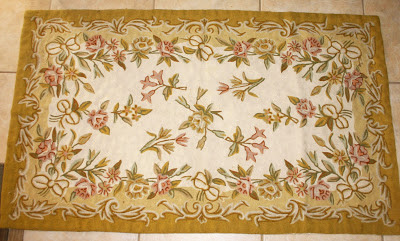 The tambour hook, or needle was a sharp hook inserted into a handle, which was often very ornate and made of ivory, bone or metal.  The handle was usually hollow to allow storage of extra hooks. The stitch is made by holding the thread under the ground, piercing the fabric from above and picking up a loop, which is brought to the surface by the hook. The next stitch is made through the preceding loop creating a firm chain of stitches.  This work, by one experienced could be done quite quickly with uniform spacing between stitches. 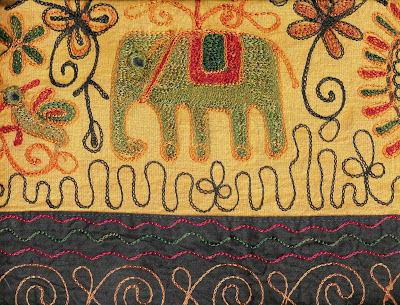 However, as always, I issue a word of caution.  In 1857 James Gibbs patented the first sewing machine that produced a chain stitch.  Gibbs eventually partnered with James Wilcox and formed Wilcox and Gibbs Sewing Machine Company.  Their machines are still used in commercial production.  So how to tell hand from machine work? The machine stitches are certainly evenly spaced, however there is not always freedom
to create intricate scrolling patterns.  Also these are not interlocking stitches, so if there is a broken thread there is a danger that several stitches may become undone.  Usually very large pieces of embroidered fabric such as this large tablecloth (and set of napkins) would only be done by machine.  Nevertheless it is a lovely example of surface embellishment. 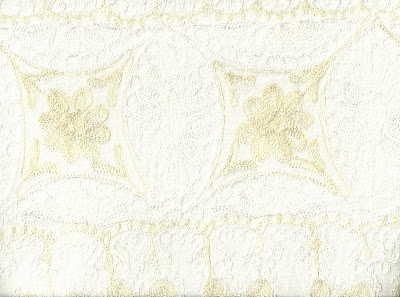 Posted by Margy Norrish at 1:13 PM